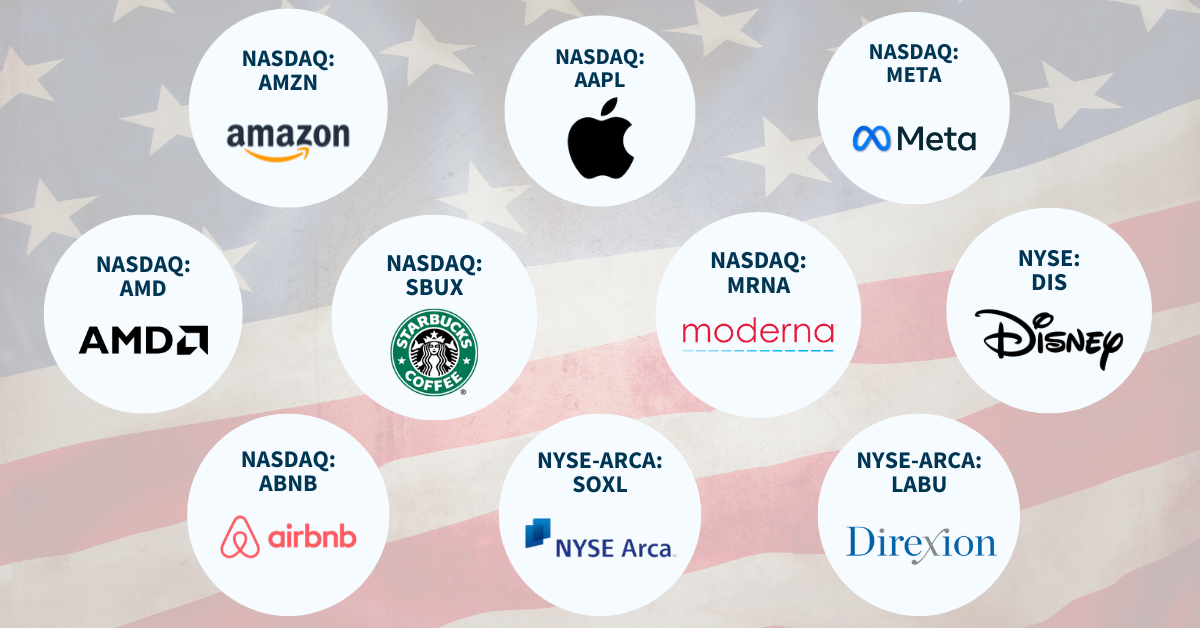 The three major US indices – Dow Jones, S&P 500 and Nasdaq Composite started the month on a positive note. However, the gains were erased after Jerome Powell’s speech at the Jackson Hole Symposium.

At July’s Federal Reserve meeting, the committee decided on a 75 basis point rate hike. Based on the meeting minutes, the committee members believe that interest rates need to be raised further to lower inflation1. However, the pace of future increases will be decided with caution.

Inflation in July receded after reaching a 41-year2 high in June. The latest consumer-price index (CPI) figure released by the US Labor Department is at 8.5% for July 20223. The slowdown in the pace of the price increase was mainly due to falling energy costs. Oil fell due to concerns about recession4. Despite the inflationary environment, there are ways investors can generate income through retirement plans.

As the US economy is showing signs of ebbing inflation, investors were expecting a less hawkish Fed. However, this expectation was proven wrong with Powell’s speech at the Jackson Hole Symposium5. He said that the Federal Reserve “must keep at it until the job is done” and that economic growth will be lowered to successfully tame inflation. His speech caused the US market to slip sharply; the S&P500 index fell by 3.4% the same day and the bearish sentiment carried on for the rest of August.

Here are some of the more popular US stocks – not ranked in any order – traded by POEMS customers in August 2022.

According to a Phillip Securities Research report dated 5 August 2022, the target price remained unchanged at USD133.00 with a Neutral recommendation. AAPL delivered earnings results that were above analysts’ expectations. AAPL’s EPS was reported at USD1.20 against the estimate of USD1.16. Reported revenue was more than the estimate, with USD83 billion against the expected USD82.81 billion. The firm did not provide any guidance but expects revenue to accelerate in the upcoming quarter despite seeing some pockets of softness8. AAPL opened August at USD161.01 and lost 2.35% to close at USD 157.22.

According to a Phillip Securities Research report dated 3 August 2022, the target price was increased to USD198.00 (prev. USD194.00) with a Buy recommendation due to AAPL’s ability to better manage supply chain constraints. 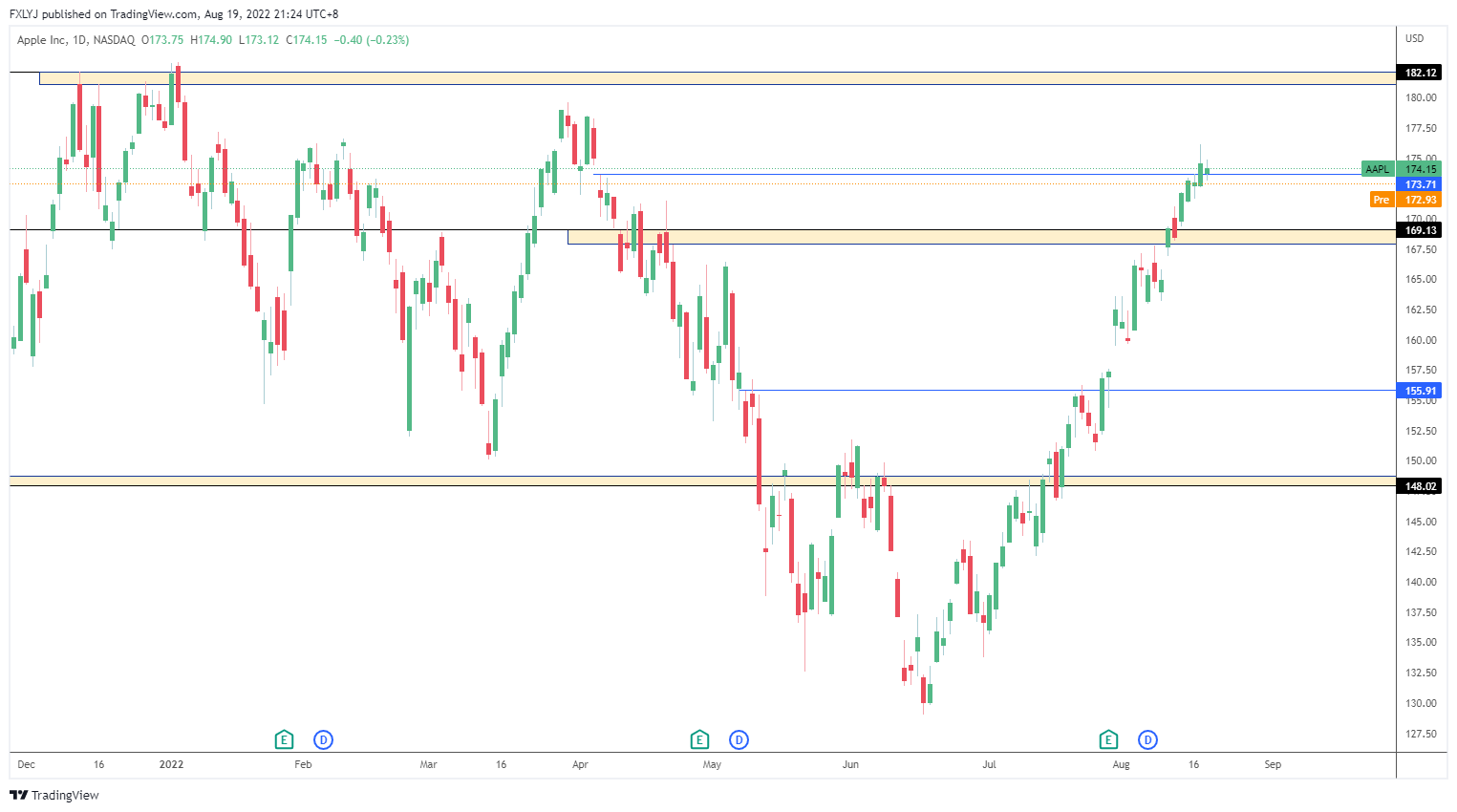 META reported disappointing earnings for this quarter. META opened the month at USD157.25 and gained 3.61% to close at USD162.93. EPS of USD2.46 and revenue of USD28.82 billion missed estimates of USD2.59 and USD28.94 billion respectively and Average Revenue per User (ARPU) of USD9.82 missed estimates of USD9.83. The company gave a troubling revenue forecast of USD26-USD28.5 billion, trailing the USD30.5 billion average analyst estimate, which translates to a projected decline of between 2% and 11% from a year ago9.

According to a Phillip Securities Research report dated 1 August 2022, recommendation for META remains at a Buy, but the target price was reduced from USD231.00 to USD221.00 due to slower revenue growth. 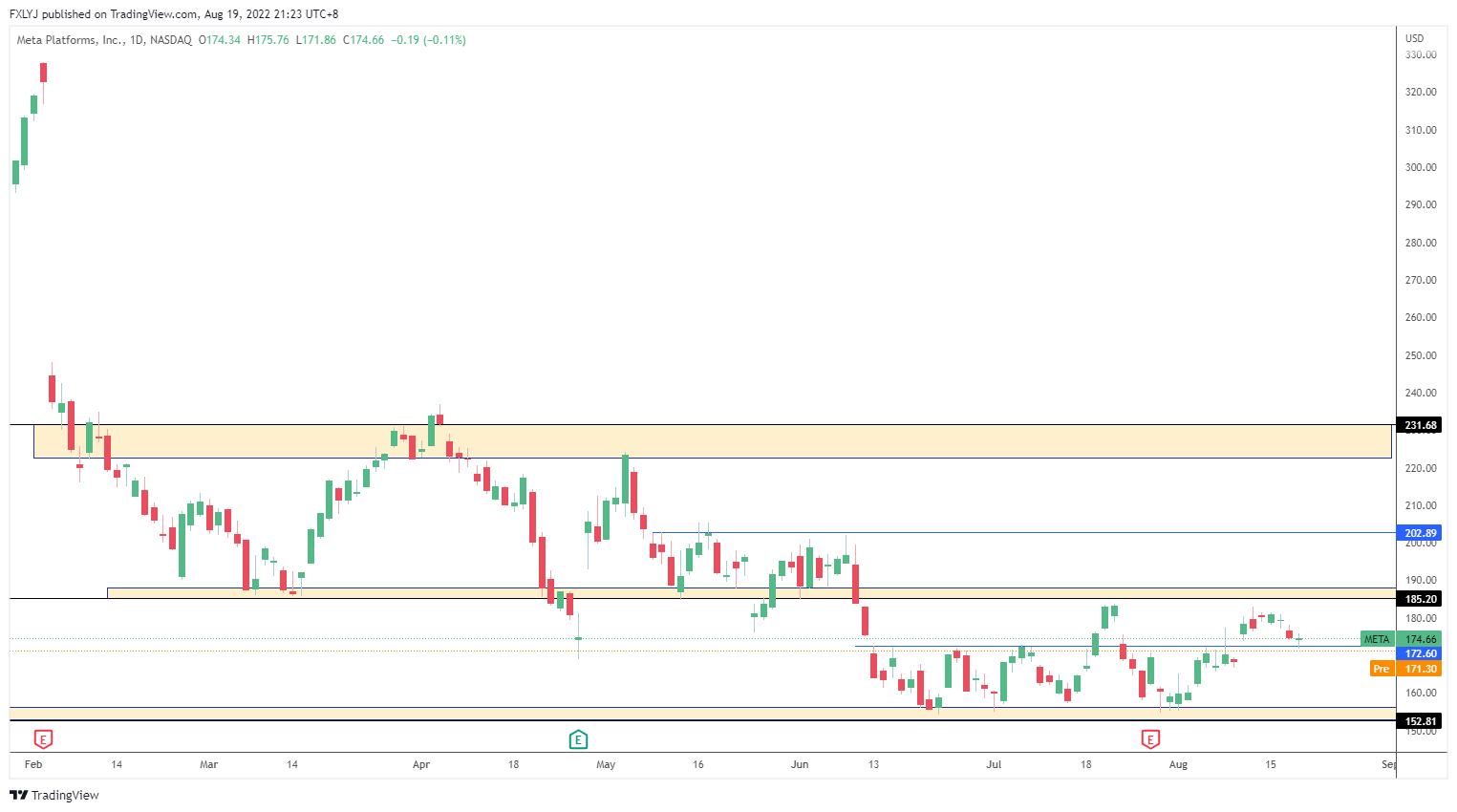 AMD reported quarterly earnings in August that beat estimates. It reported EPS and revenues of USD1.05 and USD6.55 billion, both beating estimates of USD1.03 and USD6.53 billion respectively. For the upcoming quarter, the chipmaker has taken a more conservative outlook on the PC business, when compared to previous expectation; and expects USD6.7 billion in total revenue; below the analysts’ expectation of USD6.83 billion10. AMD opened August at USD95.59 and lost 11.21% to close at USD84.87. SBUX delivered earnings results that beat expectations this quarter. SBUX’s EPS was USD0.84, higher than the estimate of USD0.75. Reported revenue was USD8.15 billion, beating expectations of USD8.11 billion. The company did not issue a new forecast this quarter but said that it is still seeing periodic short-term closures in China due to the COVID-19 restrictions. The company also said that it had opened 318 net new locations worldwide during the quarter, taking its global restaurant count to 34,94811. SBUX opened August at USD84.19 and closed 0.14% lower at USD84.07. 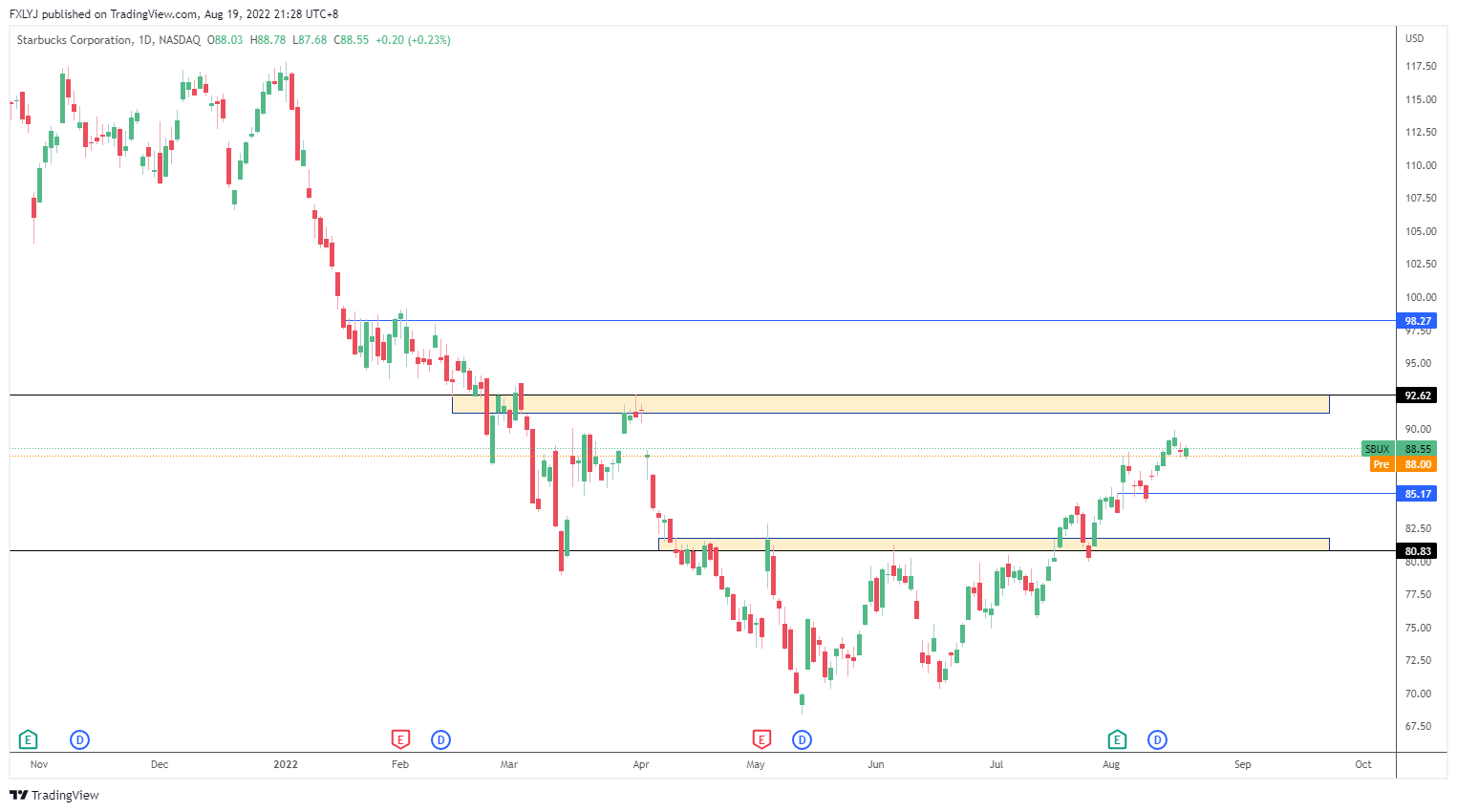 MRNA dropped 19.27% in August. It opened at USD163.85 and closed at USD132.27. MRNA posted results that were better than expected for this quarter. EPS was reported at USD5.24 beating estimates of USD4.55. Revenue was reported at USD4.7 billion beating estimates of USD4.1 billion. The company maintained its 2022 COVID-19 vaccine sales guidance of USD 21 billion. They also announced a USD1.74 billion agreement to supply its updated COVID-19 vaccine12. ABNB reported mixed earnings this quarter in August. EPS of USD 0.56 beat estimates of USD0.43, while revenue of USD2.10 billion missed estimates of USD2.11 billion. The firm guided Q3 revenue to be between USD2.78 billion and USD2.88 billion, ahead of estimates of USD2.77 billion. ABNB opened August at USD110 and gained 2.84% to close at USD113.12.

According to a Phillip Securities Research report dated 5 August 2022, the target price remained unchanged at USD119.00 with a Neutral recommendation. As on 31st August 2022, there are 2,952 Exchange-traded funds (ETF) listed in the US. There are ETFs that fulfil different purposes in the market, ETFs are excellent tools for investors under the current investment climate. Here are two ETFs with leverage for those with a bigger risk appetite. 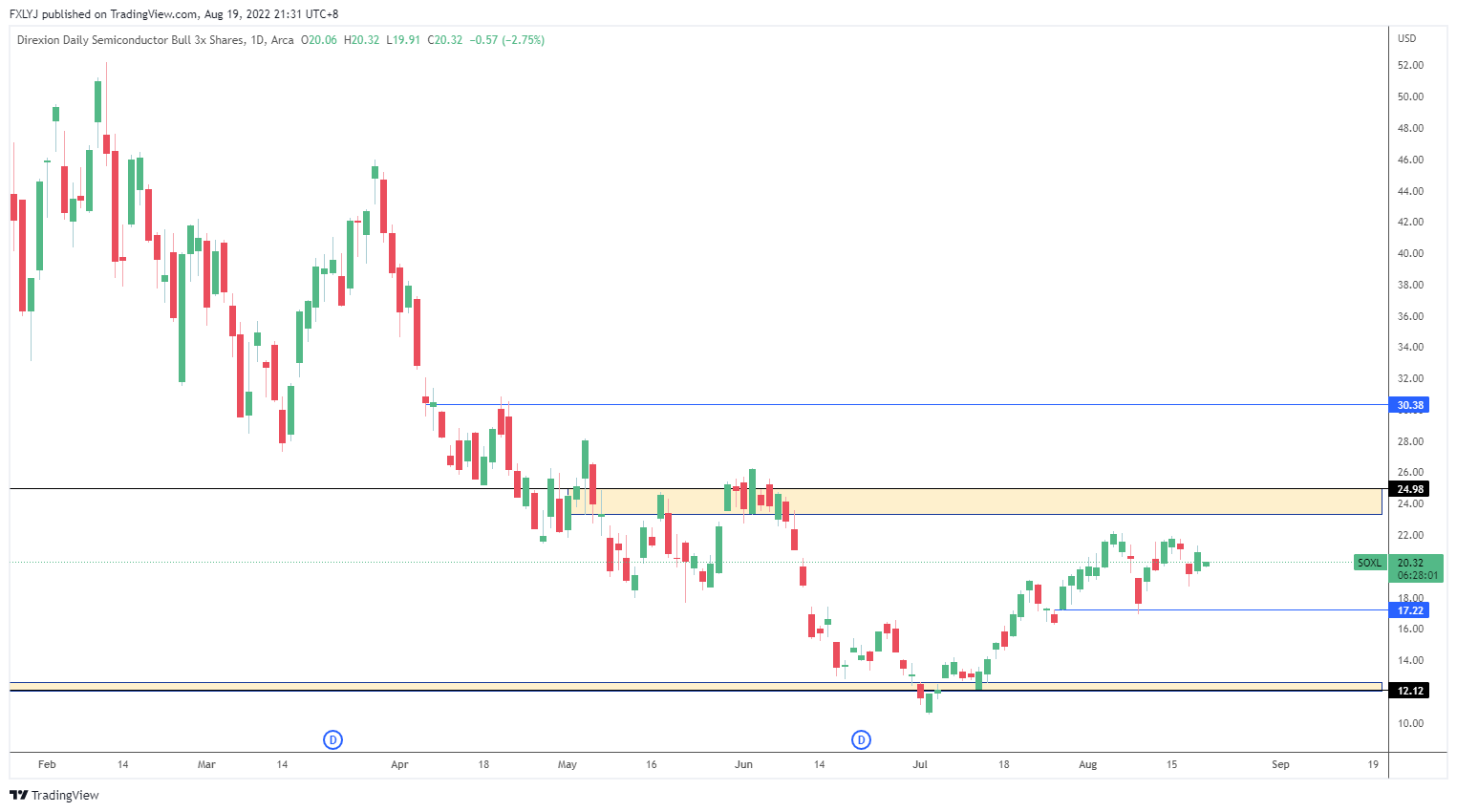 LABU seeks daily investment results, before fees and expenses, of 300% performance of the S&P Biotechnology Select Industry Index. LABU, managed by Direxion, commenced on 28 May 2015 with an expense ratio of 0.96%. LABU has full exposure to the biotechnology industry, with the top 3 holdings of Guerbet; Iovance Biotherapeutics Inc and Twist Bioscience Corp. As of 31 August 2022, its year to date return is -76.25%. LABU opened the month at USD8.14 and gained 6.63% to close at USD 8.68. 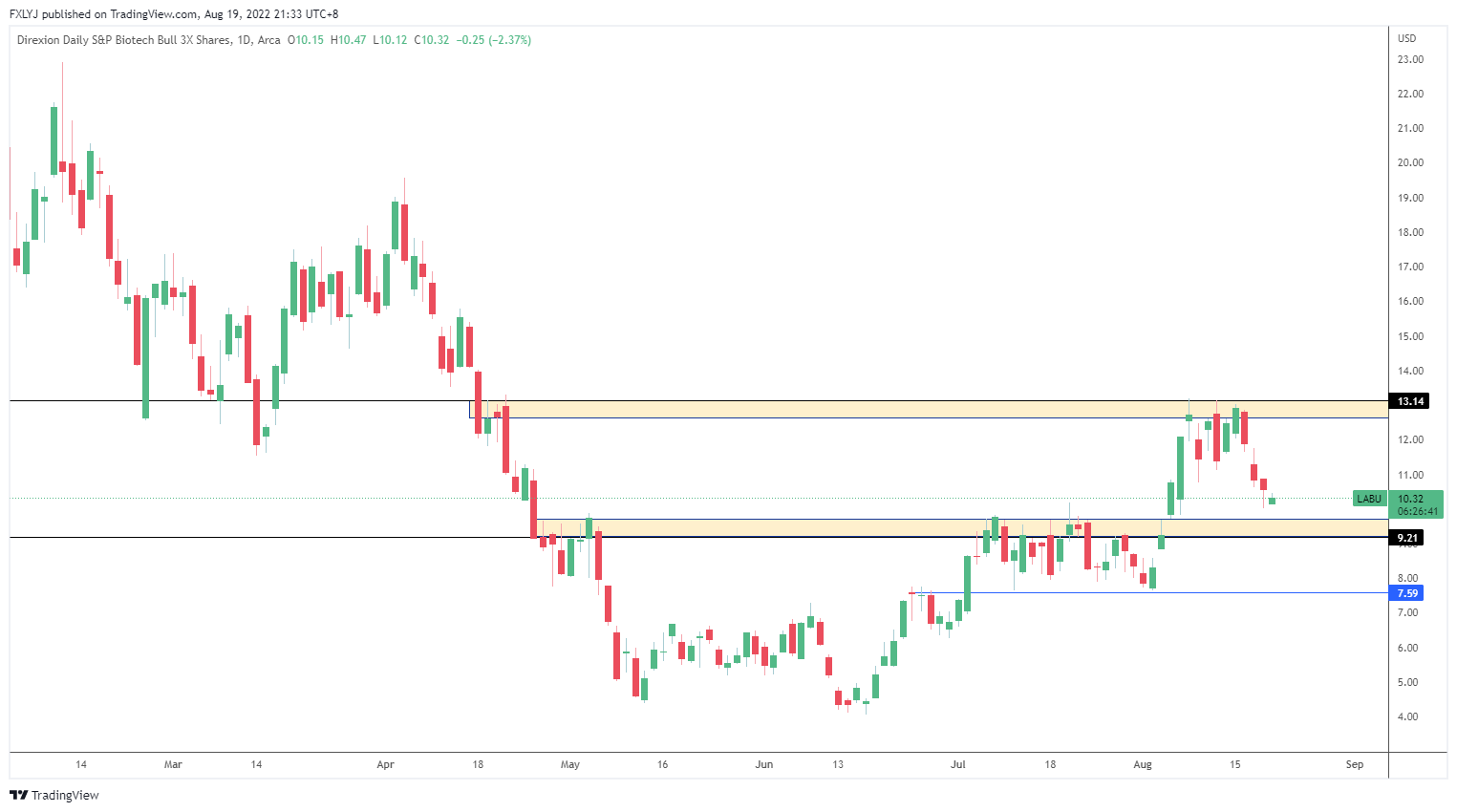 The table below shows the consensus ratings and average ratings of all analysts updated on Bloomberg in the last 12 months. Consensus ratings have been computed by standardising analysts’ ratings from a scale of 1 (Strong Sell) to 5 (Strong Buy). The table also shows a number of analysts’ recommendations to buy, hold or sell the stocks, as well as their average target prices.

Despite many companies reporting stellar earnings performance, there was a broad market retracement after Powell’s speech at the Jackson Hole Symposium. Prior to his speech, investors were expecting the Fed to turn dovish as inflation was starting to cool. However, the hawkishness of Powell led to a downturn in the market as investors started pricing in more aggressive rate hikes and lower growth in the future. Other than the equities market, currencies will be impacted by the Fed’s rate hike. A rate hike generally causes currencies to appreciate as a higher interest rate causes the currency to be more attractive. With the significance of USD globally, a more valuable USD makes USD-denominated debt more expensive to service. Eyes will be on the upcoming Federal Open Market Committee (FOMC) meeting as market participants are interested in determining the Federal Reserve’s level of hawkishness. Springboard towards your financial goals 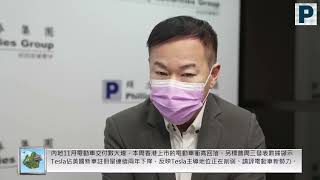 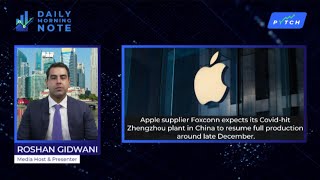 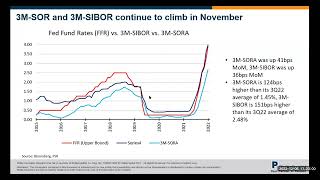 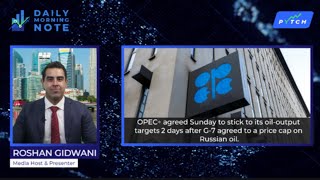 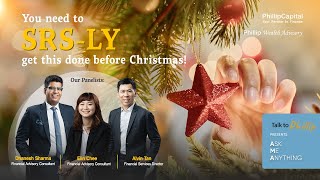 Ask Me Anything: You need to SRS-ly get this done before Christmas! 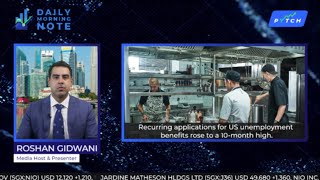