Understanding Amazon’s Gameplan and Investing in their “Copycats” November 22, 2021 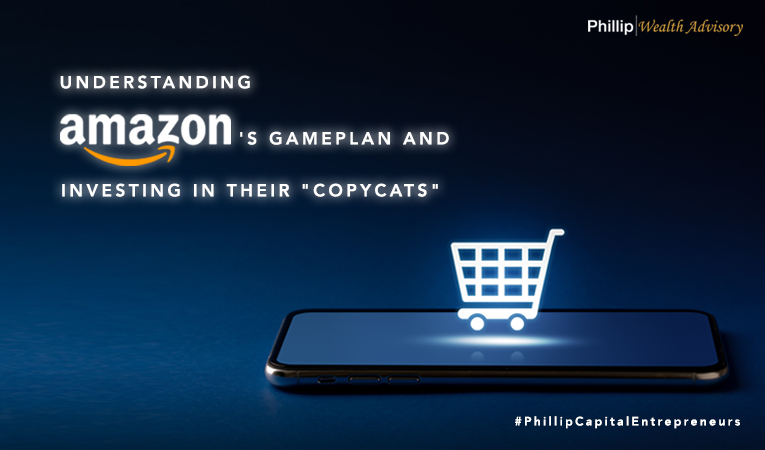 In today’s internet of things, we hardly need to type “www” when we surf the internet. However, the World Wide Web or ‘www’ had in truth sparked off a revolution, leading to many innovations we see today, powering the global economy beyond brick-and-mortar, unconstrained by space nor time. In 1989, the World Wide Web was created by an English scientist Tim Berners-Lee, for scientists around the world to freely share information. This invention has since evolved , resulting in a whole new dimension that we live in today.

“Amazon”, what is the first thought that pops up in your mind? Instead of the Amazon river, most would think of Amazon.com. In a google search, “Amazon.com” actually shows up in more results than the Amazon River.

Amazon started off by selling books on the internet. Before Amzon, Book Stacks Unlimited, founded in 1992 by Charles M. Stack was the first company to sell books on the internet. It was never listed and was later sold to Cendent Corporation in 1996, which was eventually acquired by Barnes & Noble. Ayear later on 15 May 1997, Amazon.com went public on Nasdaq Stock Exchange at $18 per share, valuing the company at US$300 million.

Today’s Amazon is far beyond just an online book-seller. Known as the “Everything” shop, it sells literally everything. It has an outsized market share in the United States that is 6 times larger than its next largest competitor, Walmart. Amazon is so successful that it sparked off copycat companies all over the globe that imitated its business model in their part of the world and achieved similar success as well. The well-known ones include Alibaba and JD.com in China, MercadoLibre from South America, Coupang from South Korea and Shopee by Sea Limited in Southeast Asia. Let’s break down Amazon’s business strategy. As a business segment, its e-commerce unit operates in a highly competitive environment. Margins are squeezed tight with no room for margin expansion for fear of consumers hopping over to other platforms with a single tap of a button.

Jeff Bezos understood the power of the flywheel effect achieved by lowering prices to bring in customer volumes, thereby increasing their sales volumes and revenue. This serves to attract more sellers to the Amazon platform, widening the available selection of goods, attracting a bigger pool of customers, effectively increasing profits. This can then be passed as cost savings to customers by lowering the prices of their goods even further. This feedback loop accelerates growth, allowing Amazon.com to invest in better logistics and platform development, strengthening its competitive advantage of keeping its competitors at bay.

This flywheel effect has resulted in Amazon’s Operating Profit growing at an annualised rate of 44% p.a. from 2011 to 2020. The sheer size of its e-commerce traffic has enabled the internet giant to negotiate for favourable credit arrangements with its suppliers and sellers, enabling it to have a negative Net Working Capital. Essentially, this is the free float that catalysed Amazon’s growth, achieving an average Return On Invested Capital (ROIC) of 17% yearly. 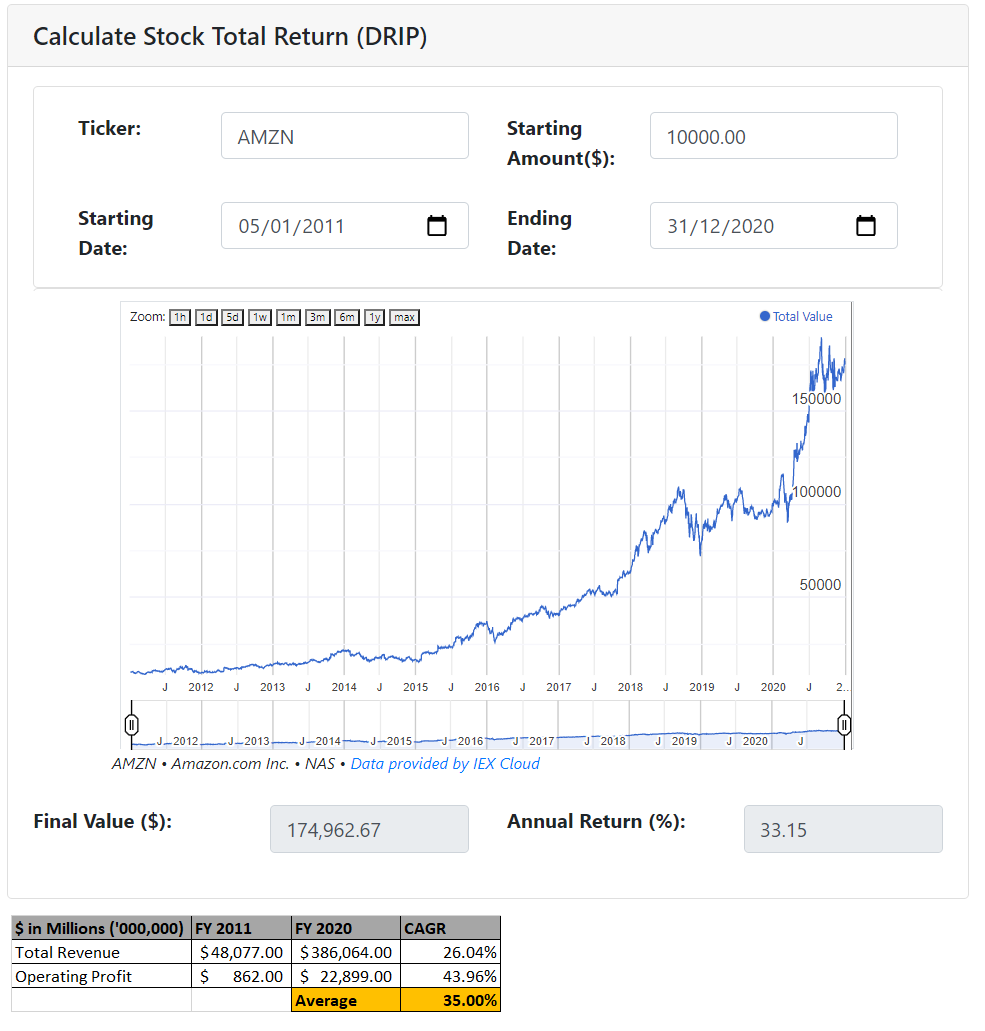 The Flywheel effect is only one side of the coin to Amazon’s two-step strategy to monopolise the market. Although their strategy drove fast growth, the company will need to maintain a low margin to retain its monopoly. Thus, step 2 of Amazon’s strategy is to expand on its e-commerce into other profitable business opportunities; Amazon Web Services (AWS).

AWS offers cloud computing services in an Infrastructure as a Service (IaaS) business model. Traditionally, companies have a team of in-house engineers to put together a server of their own. They will then manage and maintain the domain to ensure smooth operation of their day-to-day business. This is increasingly critical as businesses are driven by an immense trove of data. Companies typically pay for what they use, without needing to fork out an upfront cost to build and maintain the infrastructure of their domain. They are required to pay a premium if they wish to upgrade their services. Cloud Computing Services help small & medium enterprises to cut costs and accelerate their scale up processes. AWS is Amazon’s largest cash contributor. It currently commands the largest market share worldwide; owning a comparatively larger cut than its other 2 competitors combined. 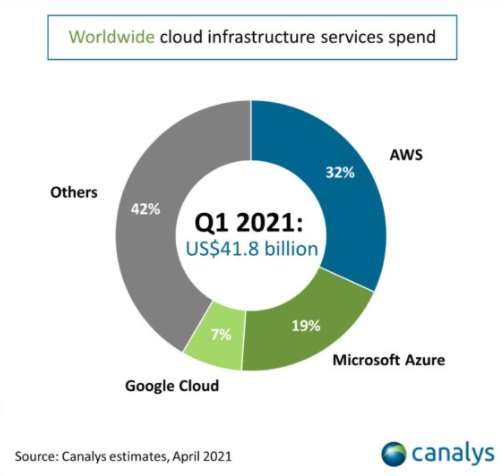 The success of Amazon has inspired many copycats in other parts of the world. As investors, we have the advantage of measuring these companies with past Amazon’s performances.

Take for example, MercadoLibre (Nasdaq: MELI), often referred to as the Amazon of Latin America, was founded in 1999 by Marcos Galperin, who was at that time a student from Stanford University. Merca libre means “_free market_” in Spanish. The company’s business had begun as an online auction platform in Argentina, very much like eBay’s business model.

Since then, MercadoLibre has expanded its businesses and is currently operating under 5 main business segments:

1. MarketPlace, an online platform for users to buy and sell their products – comparable to TaoBao (Alibaba) and Shopee (Sea Ltd)
2. Mercado Pago, a payment platform for online sales, similar to Paypal/Square
3. Mercado Publicado, the advertising arm of the company
4. Mercado Shops, a tool that allows small & medium enterprises to open virtual stores on their websites, similar to Shopify
5. Mercado Credito, the company’s credit line, similar to the “Buy Now Pay Later” (BNPL) concept

Other than these 5 business segments, the company also set up Mercado Envios, its logistics service that solves the logistical issues businesses face while transporting goods across the South American continent. 60% of their roads are unpaved;traffic jams are the norm in their densely populated cities, gangs-invested areas to avoid. Unlike its northern neighbour, there are 12 countries sharing the southern continent and a certain route may require crossing of borders several times within the same day. It is precisely these difficulties that give MercadoLibre the competitive advantage over foreign competitions as the latter lack the local knowledge and expertise that it has. 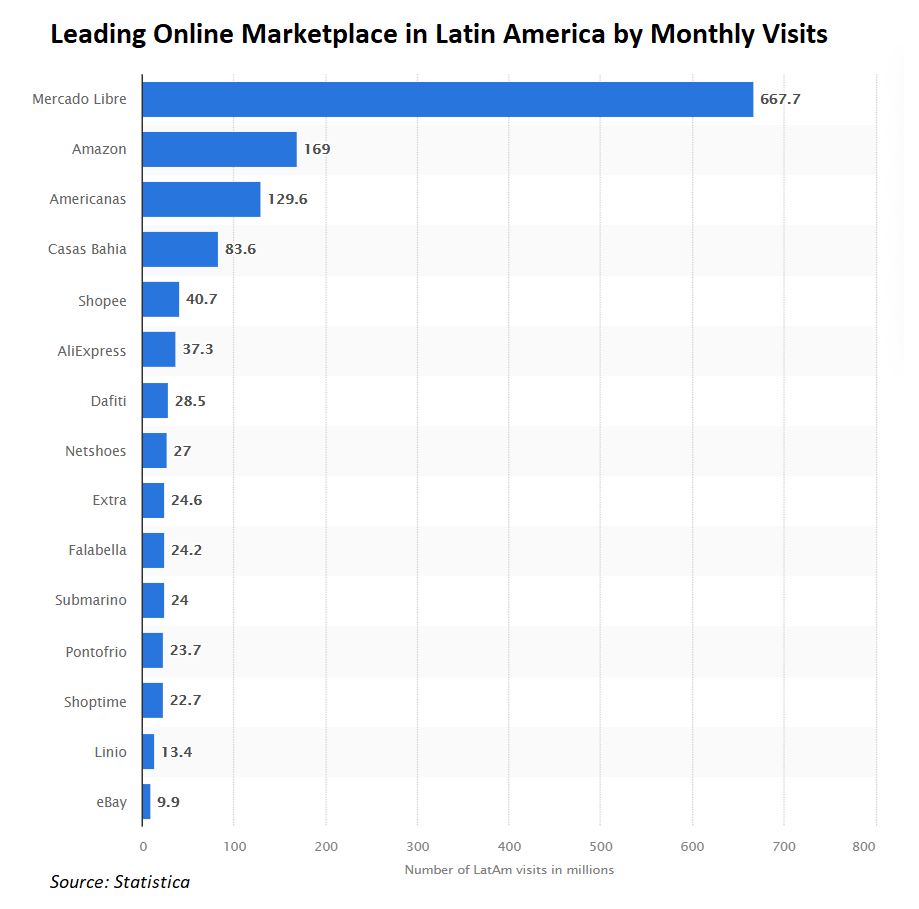 As a result, Mercado Libre dominated the online marketplace space in Latin America by emulating Amazon’s “2 steps” strategy, and and successfully trails Amazon at a distant second.

In 2020, Latin America became the fastest growing e-commerce market globally, with sales growing 37% to US$85 billion. Despite this, its e-commerce penetration rate remains low at just 8%, compared to countries such as the US at 20% and China at 30%. Morgan Stanley projected Latin America’s e-commerce penetration rate would double to 16% by 2025, accelerating its growth. With its outsized market share and strong competitive advantages, we can expect MercadoLibre to capture a large chunk of this growth.

With a dominant market share and a growing TAM (Total Addressable Market), MercadoLibre’s market cap of US$75 billion may pale in comparison especially when compared with its peers like Alibaba, JD.com and Sea Limited.

Eric is a Wealth Manager with Phillip Capital and has been with the company since 2004. In the early days he was already captivated by the workings of Wall Street. Since then, a seed was sown and Eric is in a constant pursuit to decipher the world of investing through the study of business’ fundamentals & crowd psychology embedded in price charts.

Now Eric operates his trading/investment style with one basic concept - 'Fundamentals move prices & Charts reflect crowd psychology'. By combining both FA & TA, he is on a mission to apply this concept into an easy-to-understand Chart to infer a more rounded story on the stock price. The Rise of Netflix amid the COVID-19 pandemic 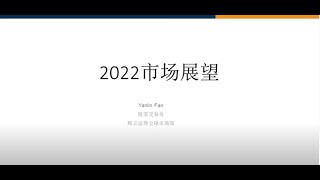 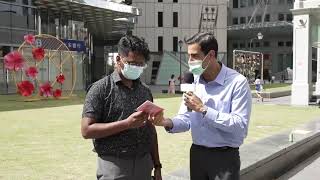 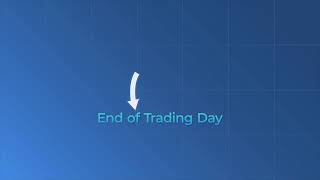 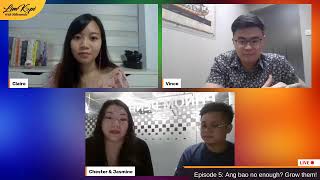 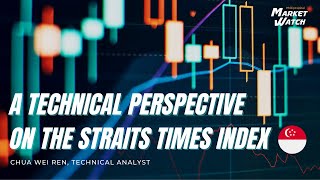 A Technical Perspective on the Straits Times Index : Market Watch 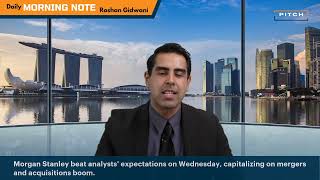 NOTICE:
You have clicked on a link which leaves POEMS website, and you will be redirected to a third party website. POEMS makes no representations nor has any supervision or control over the quality, content, reliability or security of the third party website, nor shall POEMS be liable for its use.
Can China Stocks Rebound?
Register for our webinar to find out more
Register Now