Stocks in Asia looked set for a cautious start on Friday as concerns about an economic slowdown bolster sovereign bonds.

Futures edged up for Japan and Australia, while S&P 500 and Nasdaq 100 contracts dipped after US shares posted their worst first half since 1970.

Hong Kong’s markets are closed for a holiday marking the 25th anniversary of Chinese rule. President Xi Jinping is expected to give a speech later Friday.

Chinese shares are one of the few bright spots in global markets, following a recent rally that’s taken the CSI 300 Index to the cusp of a bull market. Easing Covid curbs and brighter economic data have contributed to the rebound.
Treasury yields sank Thursday as softer than expected consumer spending and inflation bolstered the view that sharp Federal Reserve rate hikes will spark recession. The 10-year yield briefly fell below 3% before closing just above.

A gauge of the dollar retreated. Crude held losses on economic growth concerns. Bitcoin, emblematic of depressed sentiment, struggled below the closely-watched $20,000 level after its latest swoon. 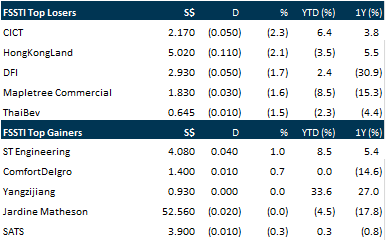 Keppel Infrastructure Trust (KIT) has entered a non-binding term sheet to purchase from its sponsor a 50-per-cent stake in Marina East Water (MEW), which owns the Keppel Marina East Desalination Plant (KMEDP), for an enterprise value of about S$355 million. Post-transaction, KIT and its sponsor, Keppel Infrastructure Holdings, will each hold a 50 per cent joint-controlling stake in MEW, the trust said in a Thursday (Jun 30) bourse filing after trading hours. KIT will receive all of the economic interest from MEW. KMEDP is Singapore’s fourth desalination plant, and the first and only large-scale, dual-mode plant, which can treat seawater or rainwater drawn from the Marina Reservoir. It can produce 137,000 cubic metres of fresh drinking water per day.

Singapore Telecommunications (Singtel) released its first report on Thursday (Jun 30) disclosing the company’s climate-related risks and opportunities, according to a framework developed by the Task Force on Climate-related Financial Disclosures (TCFD). Singtel has found that surface water flooding and bushfires are critical hazards that would bring about the highest financial impact across its Singapore and Australia assets, while its 3 most material transition risks were related to carbon pricing, capital risk and risk of stranded assets, as well as risks from its suppliers and customers. The reporting of a company’s physical and transition risks based on different climate scenarios, as well as its financial impact, are part of the recommendations made by the TCFD to help investors and lenders make more informed financial decisions. The TCFD framework consists of 11 recommended disclosures across 4 elements relating to governance, strategy, risk management, as well as metrics and targets, and the Singapore Exchange is mandating that issuers here provide such disclosures.

The Monetary Authority of Singapore (MAS) has reprimanded Three Arrows Capital (3AC) for providing false information and exceeding the assets under management (AUM) threshold allowed for a registered fund management company. 3AC, one of the most prominent crypto investors in the world, was reportedly served a liquidation order by a court in the British Virgin Islands (BVI) on Monday after it failed to make payments on its loans. On Thursday (Jun 30), MAS said 3AC provided information that was false or misleading and failed to notify the regulator of changes to directorships and shareholdings.

Suspended stock Magnus Energy has inked several agreements to enter the nickel extraction and supply business in Sulawesi, Indonesia, the Catalist-listed company said in a Thursday (Jun 30) bourse filing. MEG Harta Indonesia (MHI), a wholly-owned unit of Magnus, on Jun 14 entered an agreement for the provision of the extraction and supply of nickel ore from mining sites in Kolaka in Sulawesi. MHI and another Indonesian private company, dubbed “Company A”, are buyers. The sellers are an entity owned by the Sulawesi regional government and 2 Indonesian private companies. Magnus said that it is unable to disclose the identities of the parties for reasons of confidentiality, and also because it does not have the relevant consent from them.

Kimly Makan Place (KMP), a wholly-owned unit of Catalist-listed Kimly, has entered a joint venture with a fellow food court specialist to operate and manage an HDB coffeeshop lease at Kitchener Complex on 808 French Road. The joint venture is with 808 Ta Sun, which runs food courts, coffeeshops and eating houses, and is solely owned by Singaporean Tang Hwee Fong. The joint-venture company, Da Sun Food House, will be 49 per cent owned by KMP, while the remainder is held by 808 Ta Sun. KMP paid S$147,000 for its stake, as well as a S$980,000 lease assignment fee, adding to a total consideration of S$1.13 million fulfilled in cash. The joint-venture company will enter a service agreement with KMP, which will operate and manage the coffeeshop. Da Sun Food House will have 2 directors, with 1 director each nominated by KMP and 808 Ta Sun. The chairman of Da Sun Food House’s board will be appointed solely by KMP.

Micron Technology projected fourth-quarter revenue and profit below market estimates on Thursday (Jun 30), a sign that geopolitical turmoil and weakness in consumer spending would weigh on demand for its memory chips. Shares of the Boise, Idaho-based company initially fell 6.3 per cent in extended trading but later pared losses to trade flat. The weak outlook could raise broader concern the chip market is heading into a down cycle after a recent shortage. Micron forecast adjusted revenue for the current quarter at US$7.2 billion, plus or minus US$400 million. Analysts on average expected a figure of US$9.05 billion, according to Refinitiv IBES data.

US inflation-adjusted consumer spending fell in May for the first time this year as persistent price pressures strain household budgets. Purchases of goods and services, adjusted for changes in prices, decreased 0.4 per cent in May after a downwardly revised 0.3 per cent gain a month earlier, Commerce Department data showed on Thursday (Jun 30). Spending on services advanced while outlays for goods declined. The personal consumption expenditures (PCE) price index, which the Federal Reserve uses for its inflation target, rose 0.6 per cent from a month earlier and was up 6.3 per cent since May 2021. The core PCE price index increased 0.3 per cent, less than expected. It was up 4.7 per cent from a year ago, the smallest gain since November. The median forecasts in a Bloomberg survey of economists called for a 0.3 per cent decline in inflation-adjusted spending from the prior month and for the overall price index to be up 6.4 per cent from a year earlier.

Applications for US unemployment insurance fell, though remained near January levels, suggesting that labour market conditions are moderating. Initial unemployment claims decreased by 2,000 to 231,000 in the week ended Jun 25, Labor Department data showed on Thursday (Jun 30). The median estimate in a Bloomberg survey of economists called for 230,000 applications. Continuing claims for state benefits fell slightly to 1.33 million in the week ended Jun 18. Jobless claims have been hovering in the 230,000 range for the past 4 weeks, a level not seen since the beginning of the year when the Omicron variant was at its peak. Demand for labour is expected to weaken further as interest rates rise and firms anticipate a potential recession.

Uni-Asia Group Ltd – A new and higher plateau
Recommendation: Buy (Initiation), Last done: S$1.04
TP: S$1.26, Analyst: Phillip Research Team
• 1Q22 freight rates for Uni-Asia fleet of 10 Handysize dry bulk ships are up 84% YoY to around US$18.4k per day. FY22e PATMI is expected to jump 40% to US$25mn.
– We expect freight rates to remain elevated for the next two years. Supply is constrained by inefficiencies (port congestion and slower speeds), constrained shipyard capacity, and uncertainty on future fuel types due to IMO 2030.
– Initiate coverage on Uni-Asia Group with a BUY rating and a target price of S$1.26. Our target price is pegged to 3x P/E FY22e, in line with industry peers. We believe the tight supply of dry bulkers will keep freight rates elevated for longer. Orders for dry bulkers are at a record low, as a percentage of the order-book. We expect Uni-Asia to pay special dividends from their record earnings.

Phillip Securities Research has received monetary compensation for the production of the report from the entity mentioned in the report.