Singapore stocks bucked the regional trend and ended a tough week lower on Friday (Apr 8), as the aggressive outlook for the Fed’s monetary policy remained the key theme overnight. The benchmark Straits Times Index (STI) fell 0.6 per cent or 20.95 points to 3,383.28. Major indexes in Hong Kong, Japan, South Korea and Australia closed between 0.2 and 0.5 per cent higher. Among STI constituents, ST Engineering was the biggest gainer, closing 1.2 per cent or S$0.05 higher at S$4.10. Trailing behind was Keppel Corporation, which closed up 1.1 per cent or S$0.07 at S$6.58.

The Dow rose and the S&P 500 ended lower in choppy trade on Friday (Apr 8), as beaten-down bank shares gained and investors grappled with how best to deal with an economy that could skid as the Federal Reserve moves to aggressively tackle inflation. The yield on the benchmark 10-year US Treasury note hit a 3-year high of 2.73 per cent, helping boost the S&P banking index , which rose 1.2 per cent, after slumping to 13-month lows on Thursday. The index is down 10.8 per cent year to date. For the week, the S&P fell 1.2 per cent, the Dow lost 0.3 per cent and the Nasdaq shed 3.8 per cent, as the index was hit after Fed officials raised concerns about rapid rate hikes causing a slowdown. 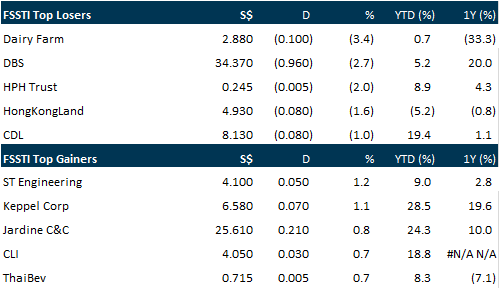 2021 was a year when Covid-19 surged anew in Singapore and globally, but clients of DBS Private Bank barely skipped a beat. Assets under management (AUM) in DBS Private Bank rose by 12.7 per cent in 2021, compared to 7 per cent in 2020. Net new monies jumped by nearly 40 per cent, buoyed by robust growth in key business areas, including in-house managed products and family office advisory. Growth was achieved on multiple fronts. Family office advisory, for example, facilitated the establishment of three times the number of family offices year on year. Family office AUM rose 115 per cent. In-house managed products, which include discretionary portfolios; DBS Barbell Income Fund; the DBS IDEA (innovators, disruptors, enablers, and adapters) Fund; and the ESG Focus Note, saw assets more than double to S$10 billion.

Keppel DC Reit may be headed for more equity fund-raising, as the data centre investor looks to pick up more assets after an active acquisition spree in the past year. Since the initial public offering in 2014, Keppel DC Reit has grown its portfolio from 8 data centres to 21, with assets under management worth S$3.5 billion. Recent deals include data centres in the Dutch city of Eindhoven and London’s Bracknell district, as well as expansion into China with a Guangdong asset. But the most chatter emerged from a deal involving S$580 million in mobile, fixed and fibre assets at M1, which is owned by parent Keppel Corp. Unitholders voted in December to invest in S$89.7 million of bonds and preference shares from the Keppel DC Reit-M1 entity holding those assets. The Reit’s leverage was 34.6 per cent as at end-2021, with S$481.5 million of undrawn credit facilities. Meanwhile, the proceeds from a S$204.3 million private placement – meant to fund the Guangdong and future acquisitions, and to repay debt – have been fully utilised.

Hotel Properties Ltd (HPL) has sold its entire interest in HPL (Olympia) Ltd (HOL) and Maple Olympia Propco 4. The £40.8 million (S$72 million) cash sale to an unrelated party will reap a gain of S$29 million but the group’s net tangible assets will not be affected for the year ended December 2021. The transaction was made via HPL Olympia Pte Ltd (HOPL), which owns HPL (Olympia) and Maple. HOPL is in turn 80 per cent owned by the group’s fully-owned HPL Properties (West) Pte Ltd. Maple owns the 405-room Hilton London Olympia while HOL rents and operates the hotel. HPL substantial shareholder and managing director Ong Beng Seng has a 20 per cent deemed interest in HOPL through Como Holdings. HPL shares ended Friday at S$3.57 on a cum dividend basis, up 0.3 per cent or S$0.01.

Jack Dorsey’s Block Inc and crypto firm Blockstream Corp are working together to build a Bitcoin mining farm with Tesla’s solar-powered battery in Texas. The mining farm will tap into Tesla’s energy storage technology with rechargeable large-scale batteries at the site, Adam Back, chief executive of Blockstream, said at the Bitcoin Conference 2022 in Miami. Back did not specify the location. The venture is the latest manifestation of the aligning interests of Tesla chief executive Elon Musk and Twitter co-founder Dorsey, including over the energy usage of Bitcoin. Earlier this week, Dorsey said he was happy that Musk joined the board of directors of Twitter after Musk revealed his sizeable stake in the social media giant. Musk expressed his interest in Bitcoin and Dogecoin early last year and allowed Tesla customers to buy the electric cars with Bitcoin, helping to send the crypto market to record highs. However, the carmaker later suspended the Bitcoin payment opening citing environmental concerns over Bitcoin mining. Shares of Tesla fell 2.1 per cent, while Block dropped 1.4 per cent. Blockstream is a private company.

US labour board prosecutors plan to formally accuse Starbucks Corp of illegally firing a group of activists who have been trying to unionise their store in Memphis, Tennessee, unless the company first settles the case. Workers United, an affiliate of the Service Employees International Union, alleged in February that the company fired 7 employees – including almost all of the union leaders at the store – because of their support for unionisation. The National Labor Relations Board’s New Orleans-based regional director determined that the workers were illegally fired and will issue a complaint unless there is a settlement, agency press secretary Kayla Blado said in an email Friday (Apr 8). Starbucks did not immediately comment in response to an inquiry. The company has said that the employees were not punished for their involvement with the union or for talking to the media, but rather because they let off-duty staff and non-employees, including reporters, into their store when it was closed, and violated numerous safety rules. The firing of the seven Memphis workers is the most prominent of dozens of cases filed with NLRB offices across the country in which Workers United has alleged illegal anti-union tactics by Starbucks. The company has said that claims of anti-union activity are “categorically false”.

Oil prices rose 2 per cent on Friday (Apr 8) but notched their second straight weekly decline after countries announced plans to release crude from their strategic stocks. Brent crude futures settled up US$2.20, or 2.2 per cent, at $102.78 a barrel. US West Texas Intermediate (WTI) crude futures rose US$2.23 to $98.26. For the week, Brent dropped 1.5 per cent while WTI slid 1 per cent. For several weeks, the benchmarks have been at their most volatile since June 2020. Trading was choppy all day and the contracts spiked higher just before settlement as traders covered short positions ahead of the weekend, said John Kilduff, a partner at Again Capital. Member nations of the International Energy Agency (IEA) will release 60 million barrels over the next 6 months, with the United States matching that amount as part of its 180 million barrel release announced in March.