The Straits Times Index (STI) extended its losing streak on Wednesday (May 11), dipping 0.3 per cent or 8.12 points to close at 3,226.07 points. In the wider Singapore market, gainers outnumbered losers 254 to 193, after 1.48 billion shares worth S$1.56 billion changed hands. The top performer on Singapore’s blue-chip index was DFI Retail Group, formerly known as Dairy Farm International. Reversing from its position as the worst performing STI stock in the previous day, the counter rose 2.7 per cent or US$0.07 to close at US$2.69 on Wednesday. At the bottom of the table was Mapletree Commercial Trust, which fell 2.2 per cent or S$0.04 to end at S$1.79. 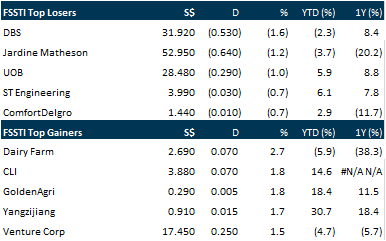 Seafood restaurant operator Jumbo Group has opened its third franchised outlet in Vietnam’s Ho Chi Minh City. Occupying a standalone building within a commercial zone, the outlet has 2 levels with an overall floor space of 8,081 sq ft; it has 7 VIP rooms and a total seating capacity of 166, the group said on Wednesday (May 11). Working closely with its franchise partner, Nova F&B Joint Stock Company, the group has plans for more outlets in Vietnam, the group said in a statement. The latest outlet comes 2 months after the group’s second one opened its doors in the same city. (The first outlet there opened in 2017.) Jumbo’s group chief executive and executive director, Ang Kiam Meng, said the opening of the third outlet is testimony to the resilience of its franchise partner and the strength of the Jumbo Seafood brand in the region.

Q&M Dental Group (Singapore) on Wednesday said it intends to continue executing its business plans, which include expanding the network of dental clinics in Singapore and Malaysia; expanding into the private dental healthcare market in China; expanding in South-east Asia; and rolling out a clinical testing laboratory pipeline of new tests. Total revenue for Q&M ticked up by 7 per cent to about S$46.8 million in the first quarter ended Mar 31, 2022, from S$43.8 million in the year-ago period. Net profit slumped 31 per cent year on year to S$6.5 million, from S$9.4 million previously, according to the mainboard-listed private dental healthcare group’s results on Wednesday (May 11) night. However, excluding other gains, net profit after tax attributable to shareholders increased by 26 per cent to S$6.5 million for the quarter, compared with around S$5.2 million a year ago. Shares of Q&M were up S$0.005 or 1 per cent to finish at S$0.495 on Wednesday, before it announced the financial results.

The board of property developer and hotel group Amara Holdings has appointed Bill Chua Teck Huat, Ginney Lim May Ling and George Seow Ewe Keong as its independent directors (IDs), on the recommendation of its nominating committee (NC). The appointments, which took effect on Wednesday (May 11), come after the departure of two of the group’s IDs. Previous lead ID Foo Ko Hing’s resignation took effect on Apr 27, and Tan Tiong Cheng stepped down after the resolution for him to be re-elected as ID failed to pass at the group’s annual general meeting (AGM) on Apr 26. In a previous announcement to the Singapore bourse, Foo resigned due to “preoccupations and personal reasons”. Chia Kwok Ping, the only ID in Amara from the previous board, had also previously indicated his intention to step down from the board. However, currently he is indicated to be continuing as a board member.

Alphabet owner of the ubiquitous search engine Google, has flagged an interest in bidding for the broadcast rights of the Indian Premier League or IPL, joining the ranks of half a dozen media giants vying for the coveted asset in cricket-crazy India. The American tech company, which also has the video-streaming website YouTube, purchased the bid-related documents from the Board of Control for Cricket in India, or BCCI, according to people familiar with the matter, who asked not to be named as the information isn’t public. SuperSport, a South Africa-based group of television channels, bought the documents too, according to a person familiar.

Digitalbridge Group is taking data centre operator Switch private for US$8.38 billion in cash, the latest deal in a sector benefiting from the digital shift spurred by the pandemic. The transaction announced on Wednesday values each share of Switch at US$34.25, a premium of 15% to the company’s closing price on May 9 when talks of it were first reported. The data centre industry has emerged as a hotbed of consolidation activity thanks to its key role in cloud computing infrastructure and a strong growth outlook underpinned by the increasing digital presence of businesses.

Disney on Wednesday said its profit slipped in the recently ended quarter but its television streaming service and parks were booming. The entertainment giant reported net income of US$470 million, just over half of the US$912 million profit it made in the same period a year earlier. Park attendance that had fallen due to the pandemic, however, rebounded and the Disney+ television streaming service gained 7.9 million subscribers to top 205 million total, the company said.