Local stocks rose alongside regional peers on Wednesday (Apr 13), as traders shrugged off worries over inflation and any looming monetary tightening from the US Federal Reserve. The benchmark Straits Times Index rose 0.4 per cent or 11.97 points to close at 3,342.22, marking the first day of gains this week. Across the broader market, advancers outpaced decliners 299 to 179, after 1.96 billion securities worth a total of S$1.1 billion changed hands. Excluding China indices, Asian stock markets generally ended the day on a positive note. The Nikkei 225 rose 1.9 per cent; the Hang Seng Index added 0.3 per cent, and the Kospi gained 1.9 per cent. The KLCI, however, closed largely unchanged, up just 0.05 points.

Wall Street rallied to end sharply higher on Wednesday (Apr 13), powered by a recovery in interest-sensitive growth stocks as investors digested hot inflation data and a mixed bag of quarterly results. Falling US Treasury yields helped the tech-heavy Nasdaq lead all 3 major US stock indexes higher, with semiconductors outperforming the broader market. Strong demand also drove the Labour Department’s producer price index to a blistering 11.2 per cent year-on-year growth rate, the hottest annual reading since the Labour Department started tracking annual data in 2010. The Dow Jones Industrial Average rose 344.23 points or 1.01 per cent to 34,564.59, the S&P 500 gained 49.14 points or 1.12 per cent to 4,446.59 and the Nasdaq Composite added 272.02 points or 2.03 per cent to 13,643.59. 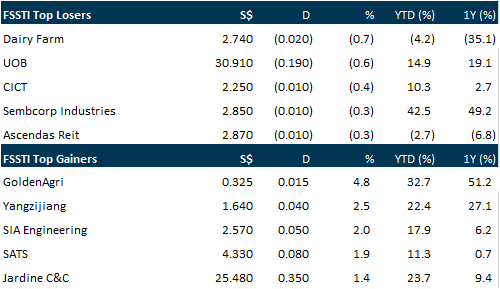 A company wants to acquire Excelpoint Technology for S$1.93 per share in cash, valuing the mainboard-listed electronics component distributor at about S$232.2 million. In a joint filing with WT Semiconductor Holdings to the bourse, Excelpoint Technology said the offer price exceeds the net asset value per share of US$0.9046 as at end-December 2021, as well as the counter’s closing prices in the past 10 years. The counter hit its lowest at S$0.26 in June 2012 during the recent 10-year period. It had traded briefly at over S$2 after listing in January 2004. The company in March stated that talks were under way on a potential transaction involving its shares when addressing the price movements of the counter, catapulting the share price to as high as S$1.84 thereafter. The counter was halted after trading hours on Tuesday (Apr 12) when the price hit a 10-year high at S$1.79, but the halt lifted on Wednesday evening after this offer was made public. Founded by CEO Albert Phuay, Excelpoint Technology is said to serve over 4,000 customers. The company reported a 51.5 per cent jump in net profit to US$12.6 million for the second half of FY2021, on a 43.2 per cent rise in revenue of US$857.6 million.

HDB rents have hit a new high in March, while condominium rents rose for the 15th straight month. Although rental volumes improved on a monthly basis, they are still lower compared with the year-ago period, according to flash figures from SRX Property and 99.co on Wednesday (Apr 13). ERA Realty Network head of research and consultancy Nicholas Mak said the continuing rise in rental rates and lower volume point to the delays in the completion of residential properties due to the supply chain disruption in the construction industry. HDB rents were up for the 21st consecutive month, rising 1.4 per cent month on month and 13.5 per cent year on year. They now surpass the previous peak recorded in August 2013 by 1 per cent. Mature estate rents climbed 1.7 per cent, while non-mature estate rents rose by 1.1 per cent. Year on year, mature estate and non-mature estate rents were up 12.2 per cent and 14.8 per cent, respectively.

The bar for family offices to qualify for tax incentives will be raised from Monday (Apr 18), with new requirements on fund sizes, AUM (assets under management) growth and business spending, among other stricter criteria. From that day, applications for funds managed and/or advised directly by a family office must have a minimum fund size of S$10 million at the point of application. Applicants must commit to increasing AUM to S$20 million within a 2-year period, under the new Section 13O of the Income Tax Act, which pertains to funds for which fund vehicles are incorporated and based in Singapore. Previously, the conditions for tax incentives under this section did not stipulate a minimum fund size.

JPMorgan Chase reported a lower-than-expected quarterly profit on Wednesday (Apr 13) as dealmaking slowed and the lender started building loan loss reserves in the face of decades-high inflation and the Ukraine crisis. Investment banking revenue for big banks stalled after the Russian invasion of Ukraine in late February. In the first quarter, the total value of pending and completed deals fell to its lowest since the second quarter of 2020, according to Refinitiv data. The largest US lender, whose fortunes are often seen as a barometer of the health of the economy, reported a 28 per cent drop in investment banking revenue in the first quarter. Credit costs swung dramatically to US$1.46 billion as the company added to reserves for loan losses. A year earlier, JPMorgan results benefited from a negative provision of US$4.16 billion when it drew down extra reserves it had built up during the pandemic. JPMorgan posted a profit of US$8.28 billion, or US$2.63 per share, in the quarter ended Mar 31, compared with US$14.3 billion, or US$4.50 per share, a year earlier. Analysts on average had expected earnings of US$2.69 per share, according to Refinitiv. It was not immediately clear if the reported numbers were comparable to estimates.

Amazon.com will levy a 5 per cent fuel and inflation fee on online merchants that use its shipping services, according to documents reviewed by Bloomberg, putting pressure on sellers to raise prices. The surcharge, which is scheduled to kick in on Apr 28, will apply to US sellers who use the Fulfillment by Amazon service that stows, packs and ships products. In March, US consumer prices surged 8.5 per cent from a year earlier, the biggest jump since late 1981. Petrol prices, already high, have also soared since Russia invaded Ukraine. The spiralling prices have prompted a range of companies to take action to offset rising costs. Airlines are raising ticket prices, Uber Technologies and Lyft last month added fuel surcharges, and FedEx and United Parcel Service have raised prices, mostly though surcharges that vary by package type. Amazon merchants were already grappling with cost-related fee hikes that took effect in January and averaged 5.2 per cent.

Prices paid to US producers jumped in March from a year ago by the most in records back to 2010, topping all estimates and underscoring persistent early-stage inflationary pressures that risk feeding through to consumers. The producer price index for final demand increased 11.2 per cent from March of last year and 1.4 per cent from the prior month, Labour Department data showed Wednesday. The monthly gain was broad across categories and also the largest on record. Excluding the volatile food and energy components, the so-called core PPI increased 1 per cent from a month earlier and was up 9.2 per cent from a year ago. That stands in contrast to the latest consumer price report which showed a softening in the pace of core inflation. The PPI and CPI reports reinforce pressure on the Federal Reserve to raise interest rates more aggressively. Central bankers have opened the door to a half-percentage point increase in interest rates in May.

Gold prices were flat on Wednesday (Apr 13), after gaining as much as 1 per cent in the last session, as Treasury yields eased after US inflation data and concerns over Ukraine conflict supported safe-haven bids, while a firm dollar capped bullion’s gains. Spot gold was little changed at US$1,964.70 per ounce by 1.36 am GMT, after hitting a near 1-month peak of US$1,978.21 on Tuesday. US gold futures were down 0.4 per cent at US$1,968.80. US Treasury yields moved lower on Tuesday, with the benchmark 10-year Treasury yield on track for its first decline in 8 sessions after a reading on inflation showed an acceleration in March, but sparked hope higher prices may have peaked. US monthly consumer prices increased by the most in 16-1/2 years in March as Russia’s war against Ukraine boosted the cost of gasoline to record highs, cementing the case for a 50 basis point interest rate hike from the Federal Reserve next month. While gold is considered a hedge against inflation, higher US interest rates and yields increase the opportunity cost of holding bullion.

Join our Phillip Securities Research Telegram channel for the latest update on our stock coverage!
Click the link to join: https://t.me/stocksbnb
HK Reports – Read up on our Hong Kong reports here
RESEARCH VIDEOS
Singapore 2Q22 Equity Strategy – A Stagflation Shelter
Date: 11 April 2022
Click here for more on Market Outlook
Sign up for our webinars here, and be among the first to receive economy and market updates.
Phillip Research in 3 minutes: #29 – Keppel Corporation; Initiation
Click here for more videos on Phillip in 3 Mins