Singapore’s stock market was in the red on Monday (Jun 13), alongside most regional key indices that were savaged by fears of bigger policy rate hikes by the United States and China’s possibly re-imposing new lockdowns to stem the coronavirus. The key gauge Straits Times Index (STI) slid 1.33 per cent or 42.38 points to 3,139.35, with only 3 counters having managed to escape unscathed. Singtel trading cum dividend rose 0.79 per cent to S$2.54, Sembcorp Industries was 0.36 per cent higher at S$2.79, and DFI Retail Group (formerly Dairy Farm International) was flat at US$2.90. Yeap Jun Rong, market strategist at IG, pointed out that last week’s sell-off has marked a break below a key downward trendline, which has been supporting the STI on at least 7 occasions since November 2020.

Wall Street stocks officially entered “bear market” territory on Monday following another drubbing as investors bet on more aggressive Federal Reserve rate hikes to address inflation. The S&P 500, the broad-based equity index, plummeted 3.9 per cent to finish the day at 3,749.53, a drop of more than 20 per cent from its most recent peak on Jan 4 – the definition of a bear market. The Dow Jones Industrial Average lost 2.8 per cent to end at 30,516.74, while the tech-rich Nasdaq Composite Index fell 4.7 per cent to 10,809.23. It was Wall Street’s fourth straight day of losses and comes ahead of Wednesday’s Fed decision. 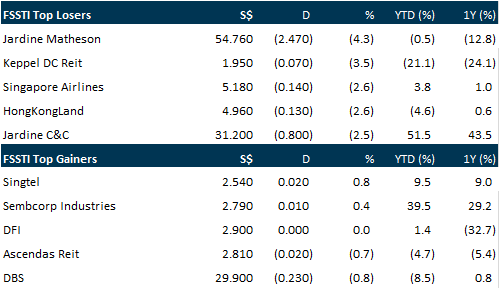 Keppel Infrastructure Trust’s (KIT) trustee-manager on Monday (Jun 13) said that it has tied up with Jinko Power (HK) Company to explore investment opportunities in energy storage and solar farms. Jinko Power (HK) Company is the international investment platform of Shanghai-listed Jinko Power Technology, a renewable energy supplier and service provider. Both parties have inked a non-binding memorandum of understanding (MOU). Under its terms, Jinko will identify up to 1,000 megawatt of solar farm and energy storage projects from its pipeline of assets which KIT can potentially invest in. Each of these assets will be in jurisdictions that meet KIT’s investment criteria, in key developed markets of Asia-Pacific, Europe and the Middle East, the trustee-manager said in a press statement. KIT and Jinko will potentially enter into separate investment agreements to acquire and hold the respective assets through special purpose vehicles. Jopy Chiang, chief executive of the trustee-manager, said KIT intends to increase its exposure to renewable energy by up to 25 per cent of KIT’s equity-adjusted assets under management by 2030. The trustee-manager does not expect the MOU to have any material financial impact on KIT’s distribution per unit for the financial year ending Dec 31, 2022. KIT closed 0.9 per cent or S$0.005 higher at S$0.57 on Monday.

The mandatory cash offer for Procurri at S$0.425 per share has garnered valid acceptances for some 124.4 million shares, representing about 42.1 per cent of total issued shares in the IT solutions provider as at Jun 10, 2022. According to a bourse filing on Monday (Jun 13), offeror DeClout further raised its stake in Procurri by purchasing some 58 million shares, or a 19.63 per cent equity in Procurri, through married trades and open market purchases. This brings the technology incubator’s resultant shareholding in Procurri to 92.53 per cent. Prior to the mandatory cash offer announcement date on May 20, DeClout and its concert parties had collectively owned Procurri shares representing a 30.8 per cent equity stake in the company. DeClout previously announced it intends to maintain the listing status of Procurri following the offer, and does not currently plan to exercise any rights of compulsory acquisition. UOB is the financial adviser to the offeror in connection with DeClout’s mandatory cash offer.

A minority shareholder of Sembcorp Marine (Sembmarine) is urging other shareholders to vote against the company’s proposed merger with the offshore and marine arm of Keppel Corp. Sembmarine closed 0.8 per cent or S$0.001 lower at S$0.12 on Friday.

Electric Last Mile Solutions Inc said it plans to liquidate through a Chapter 7 bankruptcy process, a decision that comes almost a year after the electric-vehicle startup went public and just 4 months after both its chief executive officer and chairman resigned. The Troy, Michigan-based company said in a statement late on Sunday (Jun 12) that its board and interim CEO, Shauna McIntyre, decided to liquidate after a review of Electric Last Mile’s products and plans turned up no better option for stockholders, creditors and other interested parties. Electric Last Mile’s stock plunged 55 per cent in premarket trading on Monday to 23 cents a share as of 7.11 am in New York. It was down 93 per cent so far this year as of the close of trading last week. The filing will make Electric Last Mile the first of the EV startups that merged with special-purpose acquisition companies (SPACs) to go out of business amid the recent market slump. On May 27, the company had warned it might run out of cash this month. Its shares have fallen 93 per cent this year, closing last week at 51 cents. Founders James Taylor and Jason Luo had planned to import electric delivery vans from China and assemble them at a former General Motors Hummer factory in Mishawaka, Indiana. Both men resigned in early February after Electric Last Mile accused them of making improper stock purchases just before the company announced the SPAC merger in December 2020. The company listed on the Nasdaq in late June 2021 in a SPAC transaction that netted it about US$379 million.

Oracle reported better-than-expected quarterly revenue and profit in a sign that demand for information technology hasn’t been slowed by inflation and economic uncertainty. Shares jumped about 12 per cent in extended trading. Sales increased 5.5 per cent to US$11.8 billion in the fiscal fourth quarter, topping the average analyst estimate of US$11.7 billion. Profit, excluding some items, was US$1.54 a share, compared with the average estimate of US$1.38 a share. Cloud revenue – the highly watched segment that Oracle has been trying to expand – rose 19 per cent to US$2.9 billion in the 3 months ended May 31, the Austin, Texas-based company said Monday (Jun 13) in a statement. Cloud sales growth had been greater than 20 per cent since Oracle, the second-biggest software maker by revenue, began disclosing it last year. While sales of applications for management and financial operations have fuelled the company’s cloud effort thus far, Oracle “experienced a major increase in demand in our infrastructure cloud business” of 36 per cent in the quarter, chief executive officer Safra Catz said in the statement. Cloud revenue will accelerate as much as 25 per cent in the current quarter and more than 30 per cent, in constant currency, in the fiscal year, Catz said during a conference call after the results. That revenue could increase as much as 47 per cent in the period ending in August including cloud sales from Cerner, the newly acquired digital medical records provider, she added. Economic headwinds like inflation and currency volatility could lead to corporate cost-cutting that may help drive cloud adoption, wrote JPMorgan’s Mark Murphy ahead of the results. The fast-growing cloud market is led by Amazon.com, Microsoft and Alphabet ‘s Google. The shares closed at US$64.05 in New York, the lowest value in 16 months, and have slipped 27 per cent this year amid a broad rout among technology companies.

Oil prices rose on Monday in a session of volatile trade as tight global supplies outweighed worries that demand would be pressured by a flare-up in Covid-19 cases in Beijing and more interest rate hikes. Brent crude rose 26 cents to settle at US$122.27 a barrel. US West Texas Intermediate crude rose 26 cents to settle at US$120.93 a barrel. Trade was volatile, with prices down about US$3 a barrel earlier. Oil supplies are tight, with Opec and allies unable to fully deliver on pledged output increases because of a lack of capacity in many producers, sanctions on Russia and unrest in Libya that has slashed output. Oil has surged in 2022 as Russia’s February invasion of Ukraine compounded supply concerns and as demand recovered from Covid-19 pandemic-related lockdowns. In March, Brent hit $139, the highest since 2008. Last week, both oil benchmarks rose more than 1 per cent.

Gold prices hit a more than 1-month high on Monday (Jun 13), carrying momentum from a sharp gain in the previous session on concerns over a potential blow to the US economy from an aggressive Federal Reserve approach to combating inflation. Spot gold firmed 0.1 per cent to US$1,872.53 per ounce, as of 12.59 am GMT, while US gold futures edged 0.1 per cent higher to US$1,876.60. Gold is seen as a safe-haven in times of economic crises, and hit its highest since May 9 earlier in the session at US$1,877.05 per ounce. However, benchmark US 10-year Treasury yields also rose to their highest since May 9, capping demand for zero-yield gold. Also limiting gains in greenback-priced gold, the dollar climbed to its highest in nearly 4 weeks. Gold prices saw volatile trading on Friday, as focus turned to economic risks after elevated US inflation readings bolstered bets for aggressive interest rate hikes.