Asian key markets improved on Tuesday (Jun 14) after a bloodletting the day before, although some indices including Singapore’s Straits Times Index (STI) have yet to post gains. The key gauge STI was 0.97 per cent or 30.46 points lower at 3,108.89, following Wall Street’s tumbling into a bear market overnight, with runaway inflation fuelling expectations of steeper rate hikes by the United States central bank.

US stocks mostly fell on Tuesday as markets awaited a key Federal Reserve decision and digested another report showing elevated inflation. Major indices had opened with modest gains but weakened thereafter as investors pondered the likelihood that the Fed would announce a 0.75-percentage-point interest rate increase on Wednesday instead of the telegraphed 0.5-percentage-point rise. Futures markets are currently betting on the bigger increase. “It looks like it’s going to be a 75 basis point hike,” said Quincy Krosby, chief equity strategist of LPL Financial. “We haven’t seen any sign that the Fed wanted to clarify this expectation. In fact, if the Fed stayed with a 50 basis point hike, the market could be disappointed.” The Dow Jones Industrial Average finished down 0.5 per cent at 30,364.83. The broad-based S&P 500 fell 0.4 per cent to 3,735.48, while the tech-rich Nasdaq Composite Index gained 0.2 per cent to 10,828.35. Stocks sank both Friday and Monday following a grim consumer price report that undermined hopes that inflation was peaking. On Tuesday, the Labor Department showed wholesale prices jumped 0.8 per cent in May compared to April, double the increase in the prior month. 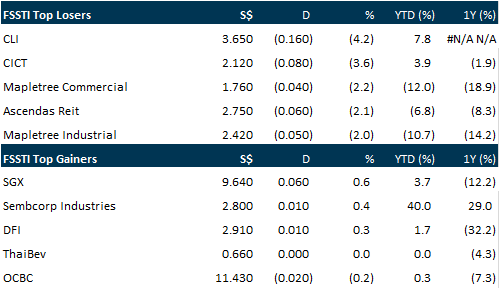 Sembcorp Marine (Sembmarine) has bagged a US$150 million EPC (engineering, procurement and construction) contract from Emgepron, a state-owned company linked to the Ministry of Defence in Brazil. Under the EPC contract, Sembmarine will construct a newbuild support vessel called the NApAnt, which will be deployed by the Brazilian Navy for scientific research under the Brazilian Antarctic Programme. The project will be executed through the group’s Estaleiro Jurong Aracruz (EJA) yard in Brazil to comply with the requirement of local content, said Sembmarine in a press statement on Tuesday (Jun 14). The group also intends to draw from pooled resources of its global network, including knowledge and experience of Sembcorp Marine Specialised Shipbuilding (SMSS) in the design and construction of high-performance and specialised vessels. Both EJA and SMSS are wholly-owned subsidiaries of Sembmarine. Measuring 93.9 metres in length, 18.5 metres in width and weighing about 5,800 metric tonnes with a draft of 6 metres, the new vessel will be built to navigational ice field standards, classified as P-6. Construction will commence in 2022 and is scheduled to complete in the third quarter of 2025. Upon its completion, NApAnt will replace the navy’s current ocean support vessel which is approaching the end of its life cycle. The new vessel is also expected to “add a new operative dimension to the Brazilian Antarctic Programme”, said Sembmarine in its press statement. Shares of the group ended Monday down S$0.005 or 4.2 per cent at S$0.114.

REAL estate company Far East Orchard has acquired a plot of land in Bristol through a joint venture (JV) with Woh Hup Holdings and Way Assets to develop a student hostel in the English city, the mainboard-listed company said in a bourse filing on Tuesday (Jun 14). Located less than a kilometre from the new Temple Quarter Enterprise Campus of the University of Bristol, the purpose-built student accommodation at Plot 6 Silverthorne Lane will feature at least 690 beds and is expected to be fully completed in 2027. Far East Orchard will have an effective 42.5 per cent interest in the development. The company’s share of the committed capital is 13.3 million pounds (S$22.5 million); it said this will be paid in cash through a combination of internal resources and external debt facilities. This development is the company’s fourth and largest investment in Bristol. Its existing 3 properties — St Lawrence House, Harbour Court and King Square Studios — currently offer 600 beds. Far East Orchard noted that the United Kingdom continues to rank as a top study destination, and that the UK-based Universities and Colleges Admissions Service is expecting the volume of international undergraduate applicants to go up by 46 per cent through 2026. Shares of Far East Orchard closed flat at S$1.09 on Tuesday.

The revised offer of S$0.40 per share to privatise property player Hwa Hong Corporation is “fair and reasonable”, the independent financial adviser (IFA) to the deal said on Tuesday (Jun 14). The IFA, Provenance Capital, advised the directors to recommend shareholders accept the offer from Sanjuro United, even though this represented a 20.8 per cent discount to the adjusted revalued net asset value (RNAV) of the group of S$0.5052 per share. The board of directors have concurred with the advice and recommendation of the IFA and have recommended that shareholders accept the offer. Notwithstanding the recommendation, the directors from the controlling Ong family said they do not intend to accept the offer themselves. The IFA noted that the the P/Adjusted RNAV ratio of 0.79 times for Hwa Hong is above the mean and close to the median P/RNAV ratios of 8 fair precedent privatisation transactions of 0.73 and 0.80 times respectively. It also said the price of S$0.40 is 8.1 per cent higher than the initial offer price of S$0.37, and is at a 32.0 per cent premium above the historical volume-weighted average trading price of the shares in the 3 months prior to the offer announcement. The IFA estimated the value range of the shares to be between S$0.40 and S$0.43, representing an adjusted P/ adjusted RNAV ratio of between 0.8 and 0.85 times, and the offer price is fair and reasonable as it is within its estimated value range. Hwa Hong’s adjusted RNAV of S$0.5052 per share is higher than its net asset value (NAV) of S$0.2852 per share as at end Dec 2021, boosted largely by net revaluation surplus arising from the independent valuations of properties held by the group, associates and joint ventures. Hwa Hong shares closed unchanged at S$0.395 on Tuesday.

Cryptocurrency exchange Coinbase Global said on Tuesday (Jun 14) it would slash 18 per cent of its workforce, or about 1,100 jobs, as part of efforts to rein in costs amid volatile market conditions. The layoffs come a day after Bitcoin fell as much as 14 per cent after major US cryptocurrency lending company Celsius Network froze withdrawals and transfers, in the latest sign of the financial market downturn hitting the cryptosphere. Coinbase said earlier this month that it would extend its hiring freeze for the foreseeable future and rescind a number of accepted offers. In a filing on Tuesday, the company said it expects to incur about US$40 million to US$45 million in total restructuring expenses, substantially all related to employee severance and other termination benefits. Coinbase last month reported a 35 per cent slump in total revenue to US$1.17 billion for the 3 months ended Mar 31, missing analyst expectations and weighing on investor sentiment.

Ford Motor has told dealers to temporarily halt deliveries of the Mustang Mach-E over a potential safety defect, a setback for the carmaker as it tries to fortify its position as a leader in electric vehicles (EV). The automaker is recalling 48,924 Mach-Es from the 2021 and 2022 model years made at Ford’s plant in Cuautitlan, Mexico, a spokesperson for the company said Tuesday (Jun 14). Dealers can still sell the car, but cannot deliver it to buyers until the defect is fixed, Ford said. Ford submitted the recall to the National Highway Traffic Safety Administration (NHTSA), which didn’t immediately respond to a request for comment. The issue involves the possible overheating of high-voltage battery main contactors, which can cause vehicles to lose power while in motion or fail to start. The defect is being corrected with a software update that owners can receive over the air or by going to their dealer, Ford said. It added that there are no open investigations with NHTSA. Ford became the second-leading seller of electric vehicles in the US last year, behind Tesla, on the strength of the Mustang Mach-E, which sold 27,140 models in 2021. Sales of the battery-powered crossover SUV were up 50 per cent so far this year to 15,718 units, and the model had its best month yet in May. Chief executive office Jim Farley has accelerated Ford’s push into EVs, with plans to build 2 million annually by 2026. This month, the automaker said it’s spending US$3.7 billion to expand factories in the Midwest. That’s on top of the US$11.7 billion Ford is investing with battery partner SK Innovation to construct EV and battery plants in Tennessee and Kentucky. Ford’s shares rose 3.3 per cent to US$12.20 at 1.07 pm in New York, rebounding after several days of declines.

Gold prices hovered near a 4-week low on Tuesday (Jun 14), as a strong dollar countered safe-haven demand fuelled by economic slowdown fears amid prospects of aggressive monetary policy tightening. Spot gold was up 0.3 per cent at US$1,823.69 per ounce, as of 12.57 am GMT, after falling to its lowest since May 19 at US$1,810.90 earlier in the session. US gold futures fell 0.4 per cent to US$1,825.20. Gold and palladium suffered sharp declines on Monday, as the dollar rallied on bets for steep US Federal Reserve interest rate hikes, eroding the appeal of bullion and other precious metals. The dollar still seemed to be the safe haven of choice, steadying near a 2-decade high scaled on Monday, and drawing most investors away from greenback-priced gold.