US stocks posted modest losses at the end of a choppy session on Monday as talks to end the Russian invasion of Ukraine sent oil prices lower. Investors also are bracing for the Federal Reserve policy announcement on Wednesday which will see interest rates rise for the first time since the pandemic began to contain inflation that has been picking up speed. Major indices gained ground early in the day but retreated later, and the benchmark Dow Jones Industrial Average ended flat at 32,945.24. The broad-based S&P 500 fell 0.7 per cent to close at 4,173.11, while tech shares were mostly in the red, sending the Nasdaq Composite Index down 2 per cent to 12,581.22. 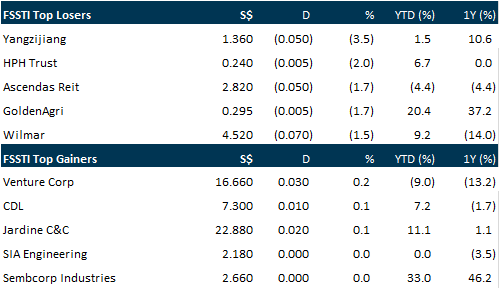 Fintech company Silverlake Axis is offering to buy back up to 242.4 million shares – representing around 9.1 per cent of the total number of its shares in issue – at S$0.33 each in cash, as part of an off-market equal access offer. The buyback will enhance shareholders’ value as it reduces the number of shares in circulation, hence raising the earnings per share of the company, it said in a bourse filing on Monday (Mar 14). The offer also provides shareholders “an opportunity to realise their investments in the shares at a premium over recent market prices of the shares without incurring transaction costs”, it added. The offer price of S$0.33 per share represents a 17.9 per cent premium to its last transacted price of S$0.28 on Mar 11, being the latest date on which the shares were traded prior to the release of the announcement. It is also a 13.8 per cent premium to the volume-weighted average price of S$0.29 for the 1-month period up to Mar 11.

Communications network company Ntegrator International said on Monday (Mar 14) that it has won 2 contracts worth a total of S$29 million from the same regional telecommunications network service provider. In a bourse filing, the Catalist-listed company said both contracts have an option for a 1-year extension, and the total value of the contracts inclusive of the options would be worth a maximum of around S$43.5 million. The first contract is a 2-year S$26 million deal for installation, maintenance and diversion services of fibre and copper cables in Singapore. The customer, who was not named, has an option to extend the contract by an additional year for S$13 million. The second 2-year contract – worth S$3 million – for the provision, installation and maintenance of fibre cables and other telecommunication equipment for commercial buildings also includes an extension option of S$1.5 million. Ntegrator noted its order book as at end-2021 stood at S$67.9 million. It expects all its orders to be delivered within the next 24 months, and “will generate sustainable revenue streams for the group up to FY2024”. The contracts are not expected to have any material impact on earnings of the group for the financial year ending Dec 31, 2022.

The price of gold is fluctuating because of Western investors and speculators, and their actions have jewellers and hoarders from China and India – the 2 largest buyers of physical gold in the world – to cut their purchases. Such has been the speculation in gold since Russia’s invasion of Ukraine last month that hedge fund net holdings of gold futures and options on New York exchanges rose to 168,000 contracts equivalent to 16.8 million ounces at the beginning of March, according to the US Commodity Futures Trading Commission (CFTC). Including smaller investors, the total net speculative holdings in US exchange derivatives has reached the equivalent of 29 million ounces – well above normal CFTC data. Traditionally, investors have turned to gold as a hedge against inflation, especially in an economic downturn and times of uncertainty. Gold prices have surged nearly 18 per cent this year to nearly US$2,050 an ounce, almost at the all-time high of US$2,070 recorded in August 2020. It was trading at US$1,981 an ounce on Monday (Mar 14).

Oil prices fell more than 5 per cent on Monday to the lowest in nearly two weeks amid hopes for progress toward a diplomatic end to Russia’s invasion of Ukraine – a development that would boost global supplies – while a pandemic-linked travel ban in China cast doubt on demand. Brent futures fell US$5.77, or 5.1 per cent, to settle at US$106.90 a barrel, while US West Texas Intermediate (WTI) crude fell US$6.32, or 5.8 per cent, to settle at US$103.01. That was the lowest close for WTI since Feb 28 and the lowest for Brent since March 1. Both benchmarks have surged since Russia’s Feb 24 invasion of Ukraine and are up roughly 36 per cent so far this year. “Oil prices are reflecting a bearish sentiment drawn from expectations of positive developments in the latest round of Russia-Ukraine negotiations,” said Kaushal Ramesh, an analyst at energy research provider Rystad Energy. Russian and Ukrainian delegations held a fourth round of talks on Monday – by video link rather than in person in neighboring Belarus as in the past – but no new progress was announced. Ukraine said it held the talks with Russia on a ceasefire, immediate withdrawal of troops and security guarantees despite the fatal shelling of a residential building in Kyiv.

Amazon.com Inc could be days away from closing its deal to buy MGM, the fabled studio behind Rocky and James Bond, as a mid-March deadline for regulators to challenge the online retailer’s merger plan approaches. Antitrust agencies in the United States and Europe both have to decide if Amazon’s US$8.5 billion deal for the nearly century-old studio breaks antitrust law. Amazon announced the transaction in May 2021, saying it offered a trove of content for the company to develop and draw consumers to its Prime fast-shipping and streaming club. In Europe, EU antitrust regulators are set to clear the planned acquisition without conditions, according to people familiar with the matter. They have a March 15 deadline to act. Shortly after that, the US Federal Trade Commission is approaching its own deadline for making a decision on whether the deal violates antitrust law. The FTC’s deadline is in mid-March, at least a day after the European Commission’s deadline, according to a person familiar with the matter. The online retailer substantially complied with the FTC’s requests for information about the deal, which started the clock for the FTC to make a decision, the Wall Street Journal previously reported.

– 3Q22 results exceeded expectations. 3Q22 revenue and PATMI at 28%/29% of our FY22e forecasts. Revenue from Americas exceeded expectations, but gross profit lower than expected due to inflationary pressures.
– US subsidiary DMFI sales grew 6.5% YoY, mainly supported by branded retail core canned vegetable and fruit and food service channels.
– DMPI saw sales of S&W branded business increase 11.2% YoY, mainly driven by higher sales of S&W fresh pineapple in North Asia and Singapore, and higher prices to counter inflation.
– Maintain BUY with a higher TP of S$0.63, from S$0.62. We raise FY22e PATMI by 7.5%, as we lower our forecasts for operating and interest expenses, in line with the trend for 9M22. Our TP is now pegged to 12x FY22e P/E, down from 13x. We still apply a 20% discount to the industry valuation, which is now 15x, down from 16x.