Asian stocks look set to rise Wednesday and crude oil held a tumble on speculation that geopolitical tension in eastern Europe will ease.

Australian shares climbed, while futures for Japan and Hong Kong pointed higher. U.S. contracts fluctuated after the S&P 500 snapped three days of losses in a rally led by technology stocks.

Russia announced a partial pullback of thousands of troops massed near the Ukrainian border and appeared to favor a diplomatic solution to the crisis there. President Joe Biden said the U.S. has yet to verify Moscow’s claims and an invasion remains possible, which the Kremlin has repeatedly denied. 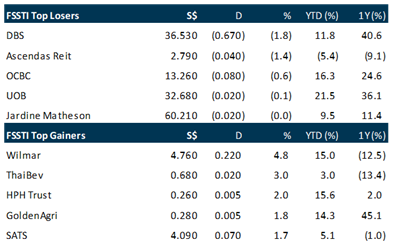 Singtel posted a 23.8 per cent rise in net profit to S$734 million for its third quarter ended Dec 31, 2021, from S$593 million a year ago. This was mainly due to a net exceptional gain from the disposal of its 70 per cent stake in Australia Tower Network (ATN), although this sum was partially offset by provisions for primary tax, interest and penalties from an unfavourable ruling for a tax dispute in Australia, the telco said in its business update on Tuesday (Feb 15). In October, Singtel said it was selling stakes in ATN, which operates telecommunications towers for Singtel’s Australian telco subsidiary Optus, for A$1.9 billion (S$1.83 billion). Upon completion, the company recognised a net gain of S$538 million from the disposal.

Real estate marketplace PropertyGuru expects to complete its listing on the New York Stock Exchange within the first quarter despite signs of waning investor interest in special purpose acquisition companies (SPACs). The company’s Form F-4 registration statement, required for the trading of shares in the US public market, was approved by the Securities and Exchange Commission and declared effective on Monday (Feb 14), chief executive officer (CEO) Hari Krishnan said in a business update on Tuesday. PropertyGuru in July last year announced plans to go public through a merger with Bridgetown 2 Holdings, a blank-cheque company backed by billionaires Richard Li and Peter Thiel, in a US$1.78 billion deal.

Mapletree Logistics Trust on Tuesday (Feb 15) announced that it will acquire 2 parcels of leasehold industrial properties in Subang Jaya in the Malaysian state of Selangor for a total price of RM65.6 million (S$21.0 million). Sitting on total land area of 257,000 square feet (sq ft), the property is located next to MLT’s existing Subang 3 and 4 properties, and a 20-minute drive from MLT’s other assets – Mapletree Shah Alam Logistics Park and Mapletree Logistics Hub – Shah Alam. Ng Kiat, chief executive of MLT’s manager, said this acquisition offers a “rare redevelopment opportunity” for the trust to amalgamate the property with its existing adjacent properties – Subang 3 and 4. “This is in line with our strategy to optimise MLT’s portfolio and future-proof our assets through asset rejuvenation,” she said.

Lendlease Global Commercial Reit (LReit), which currently indirectly holds a 31.8 per cent stake in Jem mall, has proposed to acquire the remaining interest in the prime Jurong property at an agreed property value of S$2.079 billion. If the deal goes through, the real estate investment trust (Reit) will come to own a direct 100 per cent stake in Jem, which will, in turn, bump its total portfolio net lettable area up by a substantial 70 per cent, to around 2.2 million square feet. The enlarged portfolio is also expected to lift its 2021 financial year net property income to S$147.8 million, from S$56.9 million, resulting in a net property income yield of 4.2 per cent.

General Motors Co said Tuesday it is extending a production halt to its Chevrolet Bolt electric vehicle until early April but plans to soon resume retail sales. The largest U.S. automaker in August widened its recall of the Bolt to more than 140,000 vehicles to replace battery modules after a series of fires and halted production and retail sales. In December, GM extended its production shutdown through the end of February. GM said Tuesday it plans to resume production of the Bolt at a Michigan plant the week of April 4.

Gaming company Roblox shares fell more than 11% in after-hours trading Tuesday after missing fourth-quarter expectations on both the top and bottom lines. The company also reported 49.5 million daily active users up 33% year-over-year. Roblox makes an open gaming platform, which lets players create their own “worlds” where they can interact and play with others over the internet and was the first major company working on the metaverse to go public. Roblox sells virtual currency to players, which is used to purchase digital items in the game. Roblox has also signed deals with several big brands in recent months, such as the NFL and Nike.

Disney CEO Bob Chapek on Tuesday appointed an executive to lead the company’s metaverse strategy. Mike White will be Disney’s senior vice president in charge of “next generation storytelling,” Chapek said in a memo to employees that was viewed by CNBC. White was previously in charge of Disney’s consumer experiences and platforms. Before joining Disney in 2011, White worked at tech companies such as Yahoo, according to his LinkedIn profile. The metaverse refers to the concept of new entertainment supplied by virtual reality devices that promise to usher in a new wave of business on the internet. To date, Facebook has made the biggest bet on the metaverse, changing its corporate name to Meta, and spending more than $10 billion on developing virtual reality hardware and software in 2021.

– 9M22 revenue and EBITDA were within expectations, at 75%/75% of our FY22e forecasts. 3Q22 revenue was down a modest 1.3% and EBITDA stable YoY.
– Residential connections rose 7,423 during the quarter, the highest in five quarters. Construction sector capacity has recovered but is still below pre-pandemic levels.
– We are maintaining our FY22e forecast. The DCF target price is lowered from S$1.03 to S$0.96 as we raised our WACC from higher a risk-free rate assumption. Our ACCUMULATE recommendation is downgraded to NEUTRAL. Higher interest rates will raise financing cost, lower valuations and reduce the appeal of bond-like equities. There is a risk that the upcoming regulatory review may lower prices and revenue. However, dividends can be maintained through lower CAPEX or additional financing.

Thai Beverage PLC – Spirits rise but for the margins

– 1Q22 revenue and EBITDA met expectations at 30% and 31% of our FY22e forecasts respectively. 1Q is a seasonally stronger quarter.
– Spirit volumes continue to grow to record levels but margins were hurt by rising molasses cost and a weak Myanmar Kyat. Beer volumes are still 10% below pre-pandemic levels.
– Our FY22e earnings are unchanged. Earnings growth in FY22e will be supported by price increases for spirits, easing of lockdowns and general improvement in economic conditions in Thailand and Vietnam. Maintain ACCUMULATE with an unchanged target price of S$0.765, 18x FY22e earnings, its 5-year average.