Singapore shares rose with most regional peers on Wednesday (Mar 16), as Wall Street’s major indices advanced following another drop in crude prices, which eased inflationary concerns. The Singapore Straits Times Index (STI) was up 1.7 per cent or 54.86 points to 3,290.90. Bargain hunters are also making a move after recent sell-offs in the region. Hong Kong’s Hang Seng Index, in particular, is enjoying the much-needed reprieve; it ended the day 9.08 per cent higher – its strongest daily gain since 2008. South Korea’s Kospi rose 1.44 per cent; Japan’s Nikkei 225 was up 1.64 per cent; the Kuala Lumpur Composite Index gained 0.89 per cent and the Jakarta Composite Index advanced 1.07 per cent.

Wall Street stocks finished solidly higher on Wednesday after the Federal Reserve lifted interest rates in a heavily-telegraphed move designed to counter inflation. The Dow Jones Industrial Average finished up 1.6 per cent at 34,063.10. The broad-based S&P 500 gained 2.2 per cent to 4,357.86, while the tech-rich Nasdaq Composite Index surged 3.8 per cent to 13,436.55. The Fed’s first interest rate hike since 2018 marks an effort to counter spiking consumer prices even as Russia’s invasion of Ukraine introduces new uncertainty in an economy battered by supply chain snarls and labour shortages. 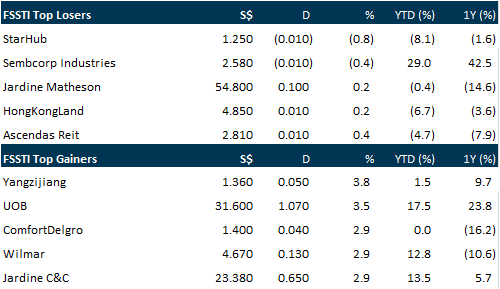 Shares of Olam Group kicked off trading on the Singapore Exchange’s (SGX) mainboard on Wednesday (Mar 16) morning at the price of S$1.69. This was up S$0.01 from the pre-open, but S$0.07 or 4 per cent lower than the last closing price of the counter under its previous security name Olam International, which ended its last day of trading on Mar 9 at S$1.76. Olam Group had briefly dipped 1.8 per cent or S$0.03 to trade at S$1.66 at 9.01 am, following a series of initial sell-downs at the open. It later recovered to trade S$0.03 or 1.8 per cent higher at S$1.71, after about 838,000 of its shares changed hands as at 10.02 am. The counter eventually ended the day at S$1.75, down S$0.01 or 0.6 per cent, with some 2.4 million shares changing hands. No married deals were recorded throughout the day, according to ShareInvestor. Olam Group carries the same market capitalisation as its predecessor at S$6.8 billion, with some 3.8 billion shares outstanding.

Some shareholders of Singapore Press Holdings have seized on the company’s recent divestment of sgCarMart for S$150 million to support the belief that piecemeal disposals of assets can extract a better value than Cuscaden Peak’s all-cash offer of S$2.36 a share. But this is not necessarily the reality, said SPH’s chief executive Ng Yat Chung at a virtual information session organised by the Securities Investors Association (Singapore) last Friday (Mar 11). Details of the proceedings were released on Wednesday (Mar 16). Ng said that while it would be fair to say that the price tag of S$150 million is “above average” of the valuation range, Cuscaden’s all-cash consideration of S$2.36 is around two thirds of the valuation range based on the opinion of the independent financial adviser (IFA) – which set the range from S$1.93 to S$2.57. “Whether or not you want to call it at the top end of the range (is up to you), but it is definitely above the mid-point and is at a good end of the range,” he said. Regarding the question of whether SPH would be better off disposing parts of its portfolio and returning shareholders the capital, Ng stressed that the company is selling some of the assets that are “not quite in (its) core business”. “As a matter of principle, we should not be thinking about returning capital to shareholders unless we have no idea what we want to do with the capital,” he said.

JB Foods on Wednesday (Mar 16) said that it expects its business in Russia to be negatively impacted in the short term due to various factors such as the massive devaluation of the Russian rouble and supply chain disruption from the ongoing conflict. The company, however, noted that it operates in the food and beverage sector, which is considered an essential industry and is not impacted by the current raft of sanctions that is sweeping across Russia, and is hence unlikely to face any immediate demand destruction. Over in Ukraine, JB Foods said its exposure to outstanding receivables there is not expected to have a significant impact on its financial performance. However, in light of the uncertain environment, the company has temporarily halted sales-related activities due to massive damage to public infrastructure and disruptions to its supply chain. JB Foods revealed that Russia and Ukraine jointly accounted for about 17 per cent of its revenue in 2021. The company does not have any physical assets in either country. For the year 2022 and based on actual shipments delivered to-date and forward orders on hand, the company estimated that the revenue contribution from both countries is expected to be around 10 per cent. Of this, the remaining undelivered contracts for 2022 stand at about 7 per cent of the group’s revenue target for the year.

Oil lost ground for the fifth time in the last six days on Wednesday as traders reacted to hoped-for progress in Russia-Ukraine peace talks and a surprising increase in US inventories. The oil market has been on a roller-coaster for more than two weeks, and both major benchmarks have traded in their largest high-to-low range over the last 30 days than at any time since the middle of 2020. Wednesday was no different, as global benchmark Brent traded in a US$6 range, between US$97.55 and US$103.70 before settling at US$98.02, down US$1.89 a barrel, or 1.9 per cent. US West Texas Intermediate (WTI) crude ended down US$1.40, or 1.5 per cent, at US$95.04 a barrel. Last week’s frenzied rally pushed Brent briefly past US$139 a barrel on worries about extended disruption to Russian supply. Brent is now more than US$40 below that point, and some analysts have warned that this reflects too much optimism that the war will end soon. The United States and other nations have slapped heavy sanctions on Russia since it invaded Ukraine more than two weeks ago. This disrupted Russia’s oil trade of more than 4 to 5 million barrels of crude daily.

Gold prices were flat on Wednesday (Mar 16), holding near a 2-week low hit in the previous session, as investors refrained from making big bets ahead of a widely expected interest rate hike decision from the Federal Reserve to contain surging inflation. Spot gold was little changed at US$1,920.71 per ounce by 12.53 am GMT, after touching its lowest since Mar 1 at US$1,906 in the last session. US gold futures fell 0.3 per cent to US$1,923.90. US Treasury yields rose to their highest in more than two-and-a-half years on Tuesday, ahead of an expected Fed announcement on Wednesday of its first interest rates hike in 3 years. Gold is highly sensitive to rising US interest rates, which increase the opportunity cost of holding non-yielding bullion. US President Joe Biden will make his first visit to Europe since the invasion of Ukraine to discuss the crisis with Nato allies next week, the White House said on Tuesday, as the refugee tally hit 3 million amid more Russian air strikes. The Russian central bank said it would suspend the buying of gold from banks from Tuesday to meet increased demand for the metal from households, its latest attempt to weather the storm on Russian markets in the face of Western sanctions.

NortonLifeLock’s US$8.6 billion purchase of Avast hit a snag on Wednesday (Mar 16) after Britain’s anti-trust regulator said it would launch a deeper investigation into the proposed cybersecurity merger following competition concerns. NortonLifeLock in August proposed to buy London-listed rival Avast in a cash-and-stock cyber deal to create a leader in consumer security software catering to more than 500 million customers. Britain’s Competition and Markets Authority (CMA) said the deal could harm competition and lead to British customers getting a worse deal when looking for security software, sending Avast shares tumbling 11 per cent. The CMA’s findings are based on an initial investigation and the regulator has called on the companies to submit proposals to allay its concerns or face an in-depth probe. NortonLifeLock said on Wednesday it did not plan to propose any ‘Phase 1’ remedies, calling the CMA’s decision “surprising”. Avast declined to comment.