The Straits Times Index (STI) inched up on Friday (Jul 15) after losing ground for the better part of the week, closing 0.3 per cent or 8.52 points higher at 3,099.15. There were 234 gainers and losers each in the broader market, with 1.1 billion securities worth S$909.9 million changing hands in the session. Regional indices were mixed as recession fears grew. Japan’s Nikkei 225 added 0.5 per cent, while South Korea’s Kospi index went up 0.4 per cent. Hong Kong’s Hang Seng Index dropped 2.2 per cent, the Jakarta Composite Index shed 0.6 per cent, while the Kuala Lumpur Composite Index fell 0.1 per cent.

US stocks closed sharply higher on Friday (Jul 15), ending several days of sell-offs with a rebound fuelled by upbeat earnings, strong economic data and easing fears of a larger-than-expected interest rate hike by the Federal Reserve. All 3 major US stock indexes posted solid gains, with financials leading the charge in the wake of Citigroup’s earnings beat. This reversed Thursday’s sell-off driven by downbeat guidance from rivals JPMorgan Chase and Morgan Stanley. The Dow Jones Industrial Average rose 658.09 points, or 2.2 per cent, to 31,288.26, the S&P 500 gained 72.78 points, or 1.9 per cent, at 3,863.16 and the Nasdaq Composite added 201.24 points, or 1.8 per cent, at 11,452.42. 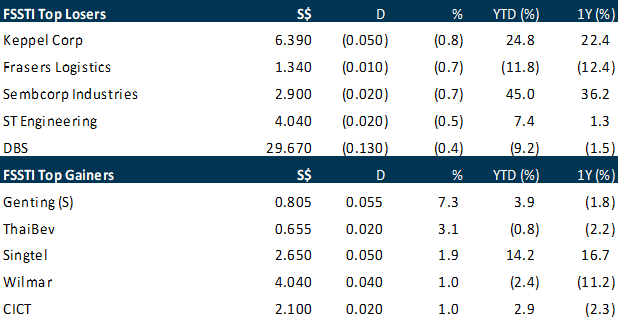 Mainboard-listed Genting Singapore on Sunday (Jul 17) said it is not aware of nor involved in any ongoing discussions on a potential transaction involving the company. The hospitality company was responding to queries from the Singapore Exchange (SGX) regarding “unusual price movements” in its shares on Friday. Shares of Genting Singapore had jumped as much as 9.3 per cent to hit an intraday high of S$0.82 before trading halted during the midday break on Friday. The surge in trading activity came after Bloomberg reported on Friday morning that US rival MGM Resorts International had recently approached the company’s controlling shareholder, the billionaire Lim family, to express its interest in a deal. While those discussions did not lead to an agreement, other potential suitors have also been in the preliminary stages of studying Genting Singapore, reported Bloomberg, citing people with knowledge of the matter. In its response to SGX, the company said that aside from the media reports on the matter, it is not aware of nor involved in any ongoing discussions concerning any potential transaction.

Singapore dollar-denominated bond issuances remained resilient in the first half of 2022 despite the challenging macroeconomic environment of inflation and tightening monetary policy, and there are suggestions demand could continue to be steady. Market participants said volumes rose around 6 per cent compared to H1 2021, which was a better performance than that of G3 issuance volume across Asia ex-Japan. Foreign financial institutions (FIs) raising SGD debt have been among the drivers of activity, and the issuance momentum could carry through for the rest of the year. “The rising rates experienced by the market so far, and expectations of more… rate hikes to come, are seeing SGD bond issuers still active in tapping the market with more urgency before funding rates increase further,” said Clifford Lee, global head of fixed income at DBS. By DBS’s estimations, SGD bond issuance volume was S$11.6 billion in H1 2022. This stood in contrast to Asian ex-Japan G3 issuance volume, which was down by 40 per cent, he said.

The ongoing credit situation in China’s property sector contributed to the S$36.3 million impairment losses taken in Metro Holdings’ financial year ended March 31, 2022, the property group said on Sunday (Jul 17). The impairment losses were on the amounts due from associates; namely, Jovial Paradise and Global Charms, both of which had invested in real estate debt instruments in China. Metro’s commitment for Jovial Paradise was S$48.7 million and S$67.7 million for Global Charm. Responding to questions from shareholders ahead of its annual general meeting on July 22, Metro said: “The impairment assessment was performed based on the associates’ exposure on underlying debt instruments which were tied to the associated development projects of the borrowers.” The group had considered the current market and situation of China’s property sector. It took the impairment after considering the loan-to-value and net asset value coverage of the underlying debt instruments.

The US dollar hovered below a near 2-decade high in Asian trading on Friday (Jul 15), having slipped overnight after 2 Federal Reserve policymakers said they favoured a smaller rate rise than the 100 basis points (bps) that investors were betting on. Traders had ramped up bets that the Fed would go for a super-sized tightening at their Jul 26-27 meeting after data on Wednesday showed consumer price inflation racing at the fastest pace in 4 decades. But those bets were pared after Fed governor Christopher Waller and St Louis Fed president James Bullard both said they favoured another 75 bps hike for this month, in spite of the inflation figures. Fed funds futures currently indicate a 36 per cent chance of a 100 bps increase, down from around 70 per cent before the comments. Against the yen, the dollar was flat at 138.98, keeping it on track for a 2.1 per cent gain. It touched 139.38 overnight for the first time since September 1998 as US Treasury yields widened the gap to their Japanese counterparts. The euro was flat at US$1.00245, after bouncing back from below parity on Thursday for a second day.

Delta Air Lines is poised to kick off the Farnborough International Airshow with orders for Boeing and Airbus jets as sales teams for the rival plane makers race to wrap up deals worth at least US$21 billion ahead of the industry’s largest trade expo. The event outside of London marks the first large-scale gathering of industry leaders in 3 years and will serve to showcase billions of dollars in aircraft transactions. It will also provide a measure of the global aviation industry’s recovery from a pandemic that flattened international travel, and serve as an update on logistics meltdowns and labour shortages that have hampered manufacturers’ efforts to speed up work in their factories. Held as the UK issues an extreme heat warning, sustainability will also be a big topic. After years of negotiations, Delta is expected to announce orders and commitments for as many as 130 of Boeing’s 737 Max 10 jetliners, providing an endorsement for the final and largest member of the narrow-body jet family, according to people familiar with its plans. Atlanta-based Delta is also preparing to order a dozen of Airbus’s A220 jets, topping up an earlier deal. A purchase order for 130 737 Max 10 jets and 12 A220s would be valued at around US$6.7 billion, according to figures from leading aircraft appraiser Avitas.

Starbucks Corp. has asked its adviser Houlihan Lokey to assess interest for its UK operations, the Times reported on Saturday (Jul 16). The coffee chain continues to “evaluate strategic options” for its company-owned international operations, the newspaper reported, without specifying how it obtained the information. A Starbucks spokesperson told Bloomberg it “is not in a formal sale process for the company’s UK business”. The UK is Starbucks’ largest market in Europe, the Middle East and Africa. As at last year, it had 1,000 stores in Britain, with 297 company-owned and 703 run by licensees, the company said in a financial report for the fiscal year ending in October 2021. Total revenue was £328 million (S$544.6 million) for the fiscal year, and Starbucks UK Coffee had repaid in full a £25 million loan from its parent company to offset losses from reduced sales during the first months of the coronavirus pandemic, it said. While the coffee chain experienced a rebound in revenue after Covid-19 lockdowns eased in the UK, it said the financial performance of company-owned stores had not recovered to pre-pandemic levels. Office, travel and inner-city stores had lagged other locations. Starbucks opened 14 new company stores during fiscal year 2021 and closed 5, it said.