Stocks may stabilize in Asia on Tuesday with US equity futures pointing higher and a gauge of the dollar retreating. Futures for Japan, Australia and Hong Kong all rose, signaling better sentiment after the worst weekly drop in global shares since March 2020. Investors are continuing to keep a close eye on China’s Covid flareups and its efforts to shore up economic growth. The yen remains around a 24-year low against the dollar, while Bitcoin held above $20,000.

Asia’s red-hot food prices will likely heat up further in the coming months, with Singapore, South Korea and the Philippines set to see the sharpest price increases, according to Nomura. Singapore is expected to see food inflation double to 8.2% in the second half from 4.1% now, while India will likely see the highest print at 9.1% due to rising feedstock costs, based on Nomura estimates. Inflation is already spreading beyond cereals and edible oils to other categories like meat, processed food and even dining out. Rice, a staple for 3 billion people, has so far been kept stable by ample stocks. But it may be next if demand surges as nations seek alternatives to expensive wheat. 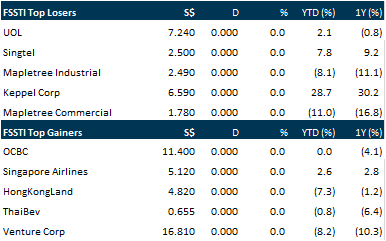 Keppel DC Reit has entered into conditional transactions to acquire 2 data centres in Guangdong, China, for a total price of about 1.6 billion yuan (S$338.3 million), the company said in a bourse filing on Monday (Jun 20). These acquisitions are expected to be accretive to the Reit’s distribution per unit. They will also bump up the Reit’s portfolio occupancy rate to 98.9 per cent from 98.7 per cent as at end-March, and raise its weighted average lease expiry to 8.8 years from 7.7 years. Keppel DC Reit will acquire these 2 facilities located at Bluesea Intelligence Valley Data Centre at Shaping Street in China from Guangdong Bluesea Data Development Co and its parent company, Guangdong Bluesea Mobile Development Co. The properties will be leased to Bluesea on a triple net basis for 15 years.

Nearly 2 in 3 S-Reits are faring worse than at IPO, but total returns mostly positive. Real estate investment trusts (Reits) have been a favoured asset class for investors here seeking stability and yield. But ahead of the 20th anniversary of S-Reits coming up in July, nearly two-thirds of the 41 actively traded S-Reits and property trusts have sunk below their initial public offering (IPO) prices after adjusting for corporate actions.Notably, all but 4 of the 22 S-Reits that listed on the Singapore Exchange (SGX) over the past decade since 2012 are below where they started, according to data compiled by The Business Times.. Investors can take comfort from the fact that only 8 of the 41 actively traded S-Reits have failed to deliver positive total returns since listing. The other 3 S-Reits that have generated negative total returns since their listings are Lippo Malls Indonesia Retail Trust, BHG Retail Reit and Dasin Retail Trust. Interestingly, all 8 of these underperforming S-Reits are focused on overseas assets outside of Singapore.En bloc hopeful Chuan Park gets offer of S$860m, lower than reserve price. Based on the EOI offer price of S$860 million, owners of residential units could stand to receive sales proceeds ranging from S$1.11 million to about S$2.45 million. Owners of a 474 square foot (sq ft) commercial unit and a 1,238 sq ft commercial unit could receive about S$1.05 million and S$1.94 million respectively.

Australia-listed real estate group Lendlease announced on Monday (Jun 20) that it will be entering into a partnership agreement with PGGM, a pension fund manager based in the Netherlands, with an investment of S$1 billion. The new collaboration, coined Lendlease Innovation Limited Partnership, will see PGGM holding an 85 per cent interest, while Lendlease holds the other 15 per cent. The funds invested into the partnership will be used for investments in “real estate assets in the innovation and life science space” specifically in Australia, Japan and Singapore, said Lendlease in its press release. Lendlease said that it will be providing services to the partnership based on the assets’ needs, including investment management and development management. At the time of its announcement, Lendlease said it had already secured its first asset in Yokohama, Japan. The 12-storey freehold property, listed for commercial use, is located close to “clusters of high-tech, knowledge-intensive R&D (research and development) and innovation operations in Yokohama’s Minato Mirai district”, said Lendlease.

Sembmarine doubles down on merger narrative after minority shareholder revolt. This comes ahead of a Jun 20 virtual dialogue session organised by the Securities Investors Association (Singapore) which is slated to be held at 5 pm, and after a minority shareholder known as Philip Loh launched an online campaign against the proposed deal.

US house prices are likely to fall as mortgage rates exceeding 6 per cent crimp affordability for the average buyer, according to Capital Economics. Property prices could contract an annual 5 per cent by the middle of next year, Matthew Pointon, senior property economist, said in a research note on Monday (Jun 20). He’d previously projected no change in values by that time. An average household looking to buy a home for the median price will now have to put more than a quarter of their annual income toward mortgage payments, according to the report. That surpasses the average 24 per cent seen in the mid-2000s. “That deterioration in affordability will shut many potential buyers out of the market,” Pointon wrote. “That will reduce the competition for homes, and sellers will eventually see the need to accept a lower price for their property.”

American chipmaker Intel has filed a claim for 593 million euros (US$624 million) in interest from the European Commission, 5 months after it convinced Europe’s second-top court to scrap a 1.06-billion-euro EU antitrust fine, an EU filing showed on Monday (Jun 20). Europe’s top court paved the way for such damage demands last year in a landmark ruling which ordered the EU executive to pay default interest on reimbursed fines in annulled antitrust cases. Intel in its application to the Luxembourg-based General Court said the Commission, which acts as the competition watchdog in the 27-country European Union, had refused to reimburse the company the default interest. The Commission returned US$1.2 billion to Intel after its court defeat in January this year.

Nearly 1 in 4 European companies in China are considering moving their investments out of the country as the ongoing Covid outbreaks and lockdowns dim the outlook for the world’s second-largest economy, a survey showed. Some 23 per cent of the businesses that responded to the survey are thinking of moving their current or planned investments away from China, said the report released Monday (Jun 20) by the European Union Chamber of Commerce in China. The survey was conducted at the end of April, when Shanghai was still in shutdown and restrictions in places like Jilin disrupted business activity. The number of European firms reassessing their options in China was the highest proportion in a decade in the survey, and also more than double the 11 per cent recorded in a February poll, said the chamber. Some 372 businesses responded to the April poll, whereas 620 responded to the February one.

HRnetGroup Limited – Resilient demand, buy-backs and more regional expansion
Recommendation: BUY (Maintained); TP S$1.18, Last close: S$0.765; Analyst Paul Chew
– Demand for jobs remains robust in Singapore with record job vacancies.
– The franchise is expanding further regionally with new co-owners in Indonesia, Shenzhen, Hong Kong and Shanghai. HRnet announced on 13 June 22 that it is undertaking a S$30mn share buyback, equivalent to almost six months average daily volume.
– While the barrier to entry in the recruitment industry may be low, we believe the barriers to scale are immense. HRnet possesses a network of more than 700 recruiters across 14 Asian cities. These barriers allow HRnet to maintain an asset-light model with minimal fixed assets of S$1.5mn. The reported return on equity is 16% but arguably much higher. Total attributable equity is S$370mn, almost equivalent to the net cash of S$327mn. In other words, HRnet could return a large chunk of capital to shareholders and still sustain profitability, especially with S$114mn working capital already tied as trade debtors.
– We maintain our BUY recommendation with an unchanged target price of S$1.18. Our valuation is benchmarked to the mid-range of the historical 5-year range, 12x PE FY22e ex-cash. HRnet dividend yield is 5% based on their guided payout of 50% of a recurrent net profit.