Singapore stocks ended the day slightly higher on Monday (Feb 21), bucking regional trend in the first trading day after the government rolled out another expansionary Budget. The benchmark Straits Times Index (STI) climbed much of the day to close 0.2 per cent or 7.46 points higher at 3,436.36.

European shares dropped to a four-month low on Monday, with auto and technology stocks leading the losses after comments from the Kremlin quelled hopes of a resolution to Europe’s biggest military crisis in decades. The pan-European Stoxx 600 slid 1.3 per cent to its lowest level since October over concerning headlines related to the Russia-Ukraine conflict. The technology sub-index shed 2.6 per cent to its lowest since March last year and marked their fourth straight day of losses. The sector, along with the European benchmark, has spent seven of eight weeks in negative territory so far this year. 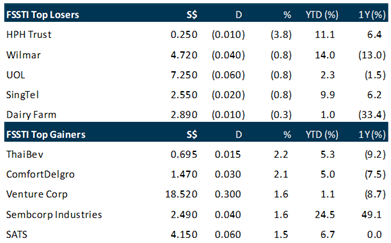 SIA Engineering, the maintenance arm of Singapore Airlines, posted a net profit of S$33.2 million for the third quarter ended Dec 31, 2021, up S$25.5 million from S$7.7 million the previous year, it said in a business update. Excluding government wage support and a one-time write back of tax provisions, SIA Engineering would have been in a loss position of S$7 million. Even with the progressive opening of vaccinated travel lanes, the group said on Monday (Feb 21) that recovery remains uncertain given that recent spikes in Covid-19 cases as a result of the Omicron variant has disrupted international air travel. The group recorded revenue of S$140 million for the quarter, 33.8 per cent higher than the S$104.6 million reported over the same period the previous year. This was attributed to the increase in transit handling-related revenue due to the higher number of flights handled. Expenditure rose at a higher rate of 42.8 per cent to S$147.8 million as the government wage support weaned. Excluding the impact of government wage support, expenditure would have increased by just 12.4 per cent. Earnings per share stood at 2.96 Singapore cents as at Dec 31, 2021 from 0.69 cents the year before. Net asset value per share came in at 142.4 cents compared with 135.8 cents previously.

Telecommunications company StarHub on Monday (Feb 21) announced it has scored the Singapore broadcast rights to screen the English Premier League (EPL) for the next 6 years, regaining the broadcast rights from rival Singtel. StarHub will screen all 380 matches from the upcoming season that kicks off on Aug 6, the mainboard-listed company said in a bourse filing. It aims to offer access to matches through its StarHub TV+, mobile and broadband services, with full pricing to be announced in June 2022, the filing added. Other services include an interactive user interface with features like split screen viewing and performance statistics. On-demand match replays will also be available.

Oil prices rose on Monday over the stand-off between Russia and the West over Ukraine, adding to supply concerns that have kept oil prices near US$100 a barrel. Brent crude futures jumped US$2.74, or 2.91 per cent, to US$96.28 a barrel by 2 pm ET (1910 GMT). US West Texas Intermediate (WTI) crude futures rose US$2.79, or 3.06 per cent, to US$93.86 a barrel at 1915 GMT. Russian forces killed a group of five saboteurs who breached the country’s southwest border from Ukraine on Monday, news agencies quoted the military as saying, an accusation that Ukraine called fake news. French President Emmanuel Macron said earlier on Monday that US President Joe Biden and Russian President Vladimir Putin had agreed in principle to a summit over Ukraine, but the Kremlin said there were no immediate plans.

Luxshare Precision Industry Co Ltd, an Apple Inc supplier, said on Monday it aims to raise up to 13.5 billion yuan (S$2.86 billion) to fund six projects, including building a production line for wearable devices. The company plans to issue up to 2.1 billion shares to up to 35 investors at a price that will be disclosed at a later stage, Luxshare said in a filing to the Shenzhen stock exchange. The move came as Luxshare pushed to “improve the company’s production capacity in downstream applications such as consumer electronics and smart vehicles,” it said in the filing. The six projects included the construction of production lines of smart wearable devices, smart mobile terminal precision components, and high-voltage connection systems for new-energy vehicles, said the filing.

Donald Trump’s new social media venture, Truth Social, launched late on Sunday (Feb 20) in Apple’s App Store, had, by the end of Monday, become the top free app available at the store. The app could mark the former president’s return to social media following his being banned from several platforms last year. The app was available to download shortly before midnight ET and was automatically downloaded to Apple devices belonging to users who had pre-ordered the app. Some users reported either having trouble registering for an account or were added to a waitlist with a message: “Due to massive demand, we have placed you on our waitlist.” The app has been available for people invited to use it during its test phase, Reuters previously reported. Trump was banned from Twitter, Facebook and Alphabet’s YouTube following the Jan 6, 2021, attack on the US Capitol by his supporters, after he was accused of posting messages inciting violence. Led by former Republican US Representative Devin Nunes, Trump Media & Technology Group (TMTG), the venture behind Truth Social, joins a growing portfolio of technology companies that are positioning themselves as champions of free speech and hope to draw users who feel their views are suppressed on more established platforms.