Wall Street stocks finished with modest losses Wednesday (Jun 22) as oil prices retreated and Federal Reserve Chief Jerome Powell acknowledged interest rate hikes could lead to a recession. Stocks began lower but pushed into positive territory for a time after Powell reiterated the need to counter inflation, but added that a recession was “certainly a possibility” amid the ongoing interest rate hikes. Fears of a downturn were a driver of the oil market, which fell sharply, a move that has helped petrol prices retreat a bit in recent days from record highs. The Dow Jones Industrial Average dropped 0.2 per cent to end at 30,483.13. The broad-based S&P 500 dipped 0.1 per cent to close at 3,759.89, while the tech-rich Nasdaq Composite Index declined 0.2 per cent to 11,053.10.

US President Joe Biden called on Congress to suspend the federal gasoline tax, saying “by suspending the 18-cent federal gas tax for the next 90 days, we can bring down the price of gas and give families just a little bit of relief.” But the strategy, which has been blocked in the past by the GOP, is unlikely to gain traction. 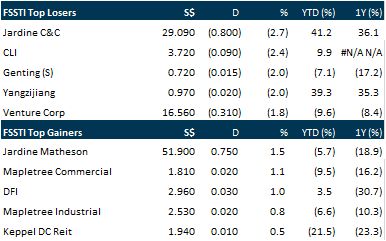 MAS issues 3 crypto licence in-principle approvals for its much-coveted digital payment token (DPT) licence, which allows companies to offer crypto services. The applicants were not named by the Monetary Authority of Singapore (MAS), though prominent crypto exchange Crypto.com later said in a statement that it was one of the awardees. Trading platforms Genesis and Sparrow Exchange (through its entity Sparrowtech) were also granted the in-principle approval, The Business Times understands.

Singtel is reportedly in talks to sell its advertising technology unit Amobee in a deal that analysts said should lead to an improvement in the telco’s profitability. Tremor International, a UK-listed advertising technology company, is said to be in talks with mainboard-listed Singtel to purchase Amobee for £165 million (S$280.4 million), according to a Sky News report on Monday (Jun 20). Sources suggested the deal could be closed “in the next fortnight”.

Moody’s Investors Service has downgraded the corporate family rating of Lippo Malls Indonesia Retail Trust (LMIRT) from B1 to B2, it said on Wednesday (Jun 22). The backed senior unsecured rating for bonds issued by LMIRT’s wholly-owned subsidiary, LMIRT Capital, was also downgraded from B1 to B2. The bonds are guaranteed by the trustee of LMIRT. Moody’s maintains its negative outlook on all ratings. The trust’s interest coverage is expected to stay weak at 1.5 times to 1.6 times through 2023, said Chua, the lead analyst for LMIRT at Moody’s. It will worsen with rising interest rates, given its high proportion of floating-rate debt, which has been increasing in proportion over the past 3 years, she added. As at Mar 31, 2022, only 42.5 per cent of LMIRT’s debt was fixed-rate.

Private market exchange ADDX has entered into a partnership with the Chongqing and Singapore branches of China Construction Bank to help Chinese domestic investors in participate in the country’s official offshore investment scheme. In a statement on Thursday (Jun 23), ADDX said both financial institutions had signed a memorandum of understanding (MOU) that will enable them to work together on the custody and distribution of a US$200 million quota allocation under the Qualified Domestic Limited Partnership (QDLP) scheme. China Construction Bank is one of China’s leading banking groups with a market capitalisation of US$175 billion as at end-2021, making it the 6th most valuable bank in the world. The bank also has a network of 14,510 branches and more than 351,000 employees.

Raw material costs for electric vehicles more than doubled during the coronavirus pandemic, according to a new report Wednesday by AlixPartners, forcing automakers from General Motors and Tesla to start-ups like Lucid and Rivian to significantly raise prices on new vehicles. Average raw material costs for an EV totalled $8,255 per vehicle as of May, up 144% from $3,381 per vehicle in March 2020, led by materials such as cobalt, nickel and lithium – all essential for the production of batteries used to power electric cars and trucks. EV-specific costs have increased to $4,500 from roughly $2,000 in the past two years, according to AlixPartners. The cost increases aren’t limited to EVs: Raw material costs for traditional vehicles with internal combustion engines have also more than doubled during that time period to $3,662 per vehicle, up 106% from an average of $1,779 per vehicle in March 2020. That uptick is being led by increases in steel and aluminium.

Coinbase shares fell almost 10% on Wednesday after rival crypto exchange Binance.US said it’s dropping certain trading fees for customers.Binance.US, the U.S. affiliate of the largest crypto exchange in the world by trading volume, said it will allow users to make spot bitcoin trades for the U.S. dollar and stablecoins tether, USD Coin and Binance USD without paying spot trading fees. Shares of Coinbase were down 9.7%. Robinhood slipped by less than 1%.

Apple CEO Tim Cook recently gave the closest thing to a confirmation that Apple’s building a headset. Cook was asked in a recent interview with China Daily USA what he thinks the key factors are for augmented reality, or AR, to succeed in the consumer market. “I am incredibly excited about AR as you might know. And the critical thing to any technology, including AR, is putting humanity at the center of it,” he said, echoing comments he’s made in the past about how important AR is to the company.

Retail holding company Franchise Group is weighing lowering its bid for Kohl’s to closer to $50 per share from about $60, according to a person familiar with the deal talks.Kohl’s shares closed down nearly 9% on Wednesday at $38.61 per share. They traded as low as $34.64 in late May. Franchise Group shares ended the day up about 1% at $36.08 per share. Franchise Group, owner of The Vitamin Shoppe and other retailers, is actively considering whether buying Kohl’s is the best use case of Franchise Group’s capital, said the person, who asked to remain anonymous since the conversations are private and ongoing.