Futures edged up for Japan, Australia and Hong Kong, while US contracts fell after a choppy Wall Street session that yielded a modest climb in the S&P 500. Apple Inc. and Google’s Alphabet Inc. weighed on the tech-heavy Nasdaq 100.

Retailer Walmart Inc. slid in extended trading on a disappointing profit outlook that could fan worries about corporate prospects as the US economy flirts with a recession amid tightening monetary settings.

A dollar gauge has dropped back to the lowest level since early July. Crude oil hovered around $96 a barrel. Bitcoin dropped below $22,000. 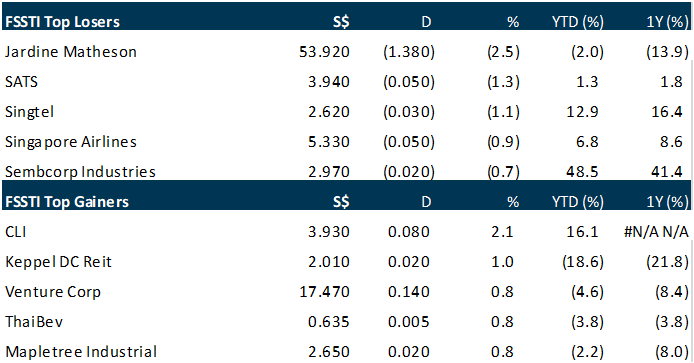 Mainboard-listed SIA Engineering reported a 15.3 per cent fall or S$1.7 million in Q1 FY2022-23 ended Jun 30 profit after tax to S$12.8 million Excluding government wage support Q1 FY2022-23 profit after tax would fall to S$4.2 million. In a business update, the aircraft maintenance company reported Q1 FY2022-23 revenue increased 36.9 per cent y-o-y to S$171.5 million. This was driven by increase in line maintenance revenue as a higher number of flights were handled. The number of flights handled in June 2022 has now reached 55 per cent of pre-pandemic volume. SIA Engineering reported a 42 per cent q-o-q growth or a doubled y-o-y growth in flights handled for Q1 FY2022-23.

Mapletree Industrial Trust (MIT) reported a 4.2 per cent year-on-year gain in distribution per unit (DPU) to 3.49 cents in the first quarter of its financial year ended Jun 30, its manager said on Monday (Jul 25). Sequentially however, its DPU was flat. Net property income for Q1 rose 24 per cent year on year to S$129.9 million, while gross revenue grew 31 per cent to S$167.8 million. The amount available for distribution to unitholders for Q1 FY22/23 increased 11.4 per cent year on year to S$92.1 million, mainly due to higher net property income partially offset by higher borrowing costs and manager’s management fees. Unitholders can expect to receive their quarterly DPU for the second quarter on Sep 9.

Real asset manager ESR Group on Monday (Jul 25) announced the first close of more than US$1 billion in equity commitments for its inaugural data centre fund. The Hong Kong-listed company said in a statement it will raise a separate discretionary capital sleeve to co-invest into its Data Centre Fund 1, which will likely close the balance of the fund at the hard cap of US$1.5 billion. The partners, which include sovereign wealth and pension funds, have an “upsize” option to commit additional equity of US$1.5 billion. This would bring the total investment capacity to US$7.5 billion over time, ESR said.

Data centre-focused Keppel Data Centre (DC) real estate investment trust (Reit) reported 2.5 per cent growth in its H1 2022 distribution per unit (DPU) to S$0.05049 from S$0.04924 a year prior. Distributable income rose 8.2 per cent to S$91.2 million, mainly due to contributions from the 3 accretive acquisitions — Guangdong Data Centre, London Data Centre and Eindhoven Campus — as well as investment in the NetCo bonds.

The US dollar fell and major rivals gained on Monday (Jul 25) as risk appetite returned to currency markets and investors weighed up the possible impact of an expected US rate hike this week. Currency markets were choppy. The safe-haven US dollar had initially gained in early European trading hours, following a cautious Asian session in which investors were worried about the global growth outlook. But the US dollar started dropping around 0800 GMT while European stock indexes, which had opened in the red, gradually strengthened. The US Federal Reserve has signalled a 75 basis-point rate hike at its July 26-27 meeting, although data last week showing inflation hit 9.1 per cent year on year in June raised the possibility of a larger 100 bps hike later this year.

Barclays will start to buy back as much as US$17.6 billion of securities after it accidentally sold more structured and exchange-traded notes than it had registered for sale. The bank said the repurchase period will start on Aug 1 and will expire on Sep 12, according to a statement on Monday (Jul 25). Barclays separately said it plans to resume the issuance and sales of some iPath exchange-traded notes, which had been suspended in April. In March, the bank said it had issued billions more securities than it had registered with the Securities and Exchange Commission. The error requires the firm to repurchase affected securities at their original price under a so-called rescission offer. Barclays said in Monday’s statement that the securities in question consist of about US$14.8 billion of structured notes and around US$2.8 billion of exchange-traded notes. It will also pay interest on the structured notes.

Tesla Inc has received a second subpoena from the US Securities and Exchange Commission over its chief executive Elon Musk’s tweets in 2018 about taking the company private, the electric automaker disclosed in a regulatory filing on Monday (Jul 25). The company said it received the subpoena on Jun 13 and will cooperate with the government authorities. The regulator did not immediately respond to a Reuters request for comment. In November last year, the regulator had subpoenaed Tesla related to a settlement that required Musk’s tweets on material information to be vetted. Musk had in 2018 settled a lawsuit by the regulator over his go-private tweets by agreeing to let the company’s lawyers pre-approve tweets with material information about the company.

Tech solutions provider Aztech Global reported a 79 per cent surge in net profit to S$29 million in the second quarter of financial year 2022, thanks to “strong production volume and shipment” of Internet of Things (IoT) and data communication devices, according to the company’s interim financial statement on Monday (Jul 25). This has brought the net profit to S$42.8 million for the 6 months ended Jun 30, a 45.7 per cent jump compared to the same period last year, despite ongoing challenges posed by the Covid-19 pandemic and supply chain disruptions. Likewise, revenue in Q2 leapt 77 per cent year on year to S$236.6 million, but saw an 84.8 per cent surge sequentially. For the first half of the year, the company reported a 46 per cent year-on-year boost in revenue to S$364.6 million.

Apple Inc announced a rare retail promotion in China on Monday (Jul 25), offering 4 days of discounts on its top-tier iPhones and related accessories in advance of the launch of its next-generation devices. The company, usually reluctant to alter pricing, will take up to 600 yuan (S$123) off the price of its top-line iPhone 13 Pro series between Jul 29 and Aug 1, said a notice on its website. To be eligible, buyers have to use one of a select number of payment platforms, such as Ant Group Co’s Alipay. Certain AirPods and Apple Watch models are also part of the promotion. The discounts come as China’s economy tries to bounce back from major Covid-19 lockdowns in business hubs Shanghai and Beijing, which have hurt sales of leading domestic smartphone brands from Xiaomi Corp to Vivo and Oppo. Apple bucked the trend by registering healthy growth in China shipments in June, according to national statistics, though the discounts suggest even it has surplus inventory heading into the latter half of the year.