Stocks in Asia may come under pressure after U.S. shares sank with mixed earnings fueling concerns economic growth will slow down. The risk aversion sparked a jump in Treasuries and bolstered the dollar. Futures for Japan, Australia and Hong Kong fell, while U.S contracts wavered, after the S&P 500 slid to a six-week low and the technology-heavy Nasdaq 100 plumbed levels last seen in 2021. Meanwhile, Tesla’s valuation took a $126 billion hit as the stock fell 12% on investors’ concern that Elon Musk may sell shares to complete his $44 billion Twitter takeover.

China said it would step up infrastructure construction after a meeting chaired by President Xi Jinping, the latest pledge to bolster an economy that’s been hammered by a widening series of Covid-related lockdowns. The move came as mass testing for the virus kicked off in Beijing, sparking fears of a Shanghai-style lockdown. As the government takes ever-more extreme steps to stamp out transmission, one thing it hasn’t been able to do is create its own mRNA vaccine — possibly the country’s biggest Covid failure of all. Elsewhere, blood tests show well over half of the U.S. population has been infected with Covid-19 at some point. 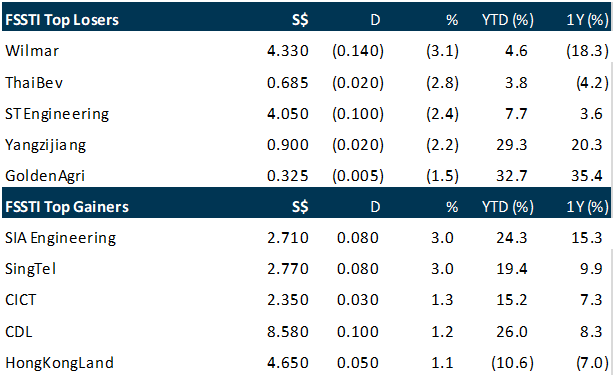 Frasers Centrepoint Trust 1H22 SPU rose 2.3% year on year to 6.136 cents. Gross revenue rose 1.5% year-on-year to $176.2 million on full contribution from the ARF acquisition and was partially offset by the loss of contribution from properties divested. NPI was up 3.8% year-on-year due to decrease in property expenses which arose from lower net allowance for doubtful debts and other property expenses in FY21. All properties in FCT’s portfolio registered better or steady occupancy quarter-on-quarter. The retail property portfolio registered improved committed occupancy of 97.8%, up 0.6 percentage-points from the previous quarter.

Sheng Siong’s Q1 FY22 net profit up 13.9% year on year. Revenue for the quarter rose 6 per cent to S$358 million, from S$337.5 million a year ago. This was due to an increase in comparable same store sales by 4.7 per cent year-on-year in Singapore and 1 per cent year-on-year in China, it noted. It added that its new store in Singapore contributed 0.3 per cent increment to the total revenue increase. Sheng Siong has 64 stores in Singapore and 4 stores in China today. As inflationary pressures mount, Sheng Siong noted that consumers are “increasingly concerned with the higher cost of living and may choose to dine-in more at home,” which may continue to support sales at their supermarkets. Lim Hock Chee, Sheng Siong’s chief executive, also shared that the group secured the leases of 3 stores last year and is targeting to open 3 to 5 new stores per year for the next 3 to 5 years, with a focus on areas where it is not present in yet.

Sabana Reit unitholders vote against appointment of director Chan Wai Kheong at AGM. Chan, a hedge fund founder and former Credit Suisse trader, was appointed to the board of Sabana Reit in June last year. At an annual general meeting (AGM) on Apr 26, unitholders representing some 77 per cent of votes cast voted against Resolution 3 to endorse his appointment as a director of the Reit manager. Unitholders holding a total of 355.6 million units had voted in the resolution. Unitholders holding another 270.7 million units, including Sabana Reit’s major unitholder ESR Cayman and its concert parties, had abstained from voting in that resolution.

The 30-counter Straits Times Index (STI) is set for a shake-up later this week, with the smallest companies on the market barometer fighting to stay on the index. This has been triggered by index constituent Yangzijiang Shipbuilding : BS6 -2.17% (YZJ Shipbuilding), which is spinning off its investment arm into a separately listed entity. The shipbuilding segment remains in YZJ Shipbuilding while Yangzijiang Financial Holding (YZJFH) will list on Thursday (Apr 28). As a component of YZJ Shipbuilding, YZJFH will be included in the STI on day 1. Index provider FTSE Russell has announced that all constituents will be ranked by their full market capitalisations on Apr 28, and the smallest constituent will be removed effective May 5. Investors in the smallest STI counters should keep a close watch on the companies at risk of deletion, as passive index trackers would need to sell shares in the counter that gets deleted.

General Electric on Tuesday pegged its full-year earnings at the lower end of its previous forecast as the US industrial conglomerate was dogged by persistent supply chain disruptions and rising freight and raw material costs. Two years into the pandemic that has snarled supply chains across the globe and driven up costs for everything from labour to raw materials, companies are scrambling to produce enough to feed current demand and also to restock inventory shelves. In January, the company projected adjusted profit for the year to be in the range of US$2.80 to US$3.50 per share. It also expected to grow its profit margin by 150 basis points and to generate US$5.5 billion to US$6.5 billion in free cash flow.

JetBlue shares slump after airline drastically cuts 2022 growth plans. JetBlue is scaling back its 2022 growth plans to no more than 5% to avoid further flight disruptions. The airline previously said it expected to grow as much as 15% this year. Airlines have been forced to rethink growth plans as they grapple with weather delays, tight staffing and higher fuel costs.

Sales of new US homes drop to lowest in four months indicating high prices and surging borrowing costs are putting more of a squeeze on the market. Purchases of new single-family homes decreased 8.6 per cent to a 763,000 annualised pace, government data showed Tuesday. The median estimate in a Bloomberg survey of economists called for a 768,000 rate. Mortgage rates have sharply escalated as the Federal Reserve signals aggressive steps to combat decades-high inflation. The average for a 30-year loan climbed to 5.11 per cent last week, up two full percentage points from the end of last year and the highest since 2010, the latest Freddie Mac data show. The steep ascent in borrowing costs, combined with high home prices across markets, is sidelining more prospective buyers.

Pfizer and BioNTech on Tuesday asked the Food and Drug Administration to authorize a third dose of its Covid vaccine for children ages 5- to 11-years-old. The application comes after Pfizer released data earlier this month from a small lab study of blood samples from 30 kids in the age group, which showed a 36-fold increase in antibody levels against the omicron variant compared to two doses of the vaccine. The booster shot is a 10-microgram dose, the same level as the primary vaccination series for the age group. The third shot did not demonstrate any new safety concerns in the trial, according to Pfizer. Only about 28% of children ages 5 to 11 had received their primary series of two doses as of April, according to CDC data.The FDA previously authorized Pfizer booster doses for teenagers 12 to 15-years-old in January as the omicron variant swept the nation.

– 1Q22 revenue of $2.1bn was below of our forecasts, at 23.5% of FY22e. The drag came from the Urban Development business.
– The update mentioned 1Q22 net profit was higher YoY, with improved performance from all its business segments except Urban Development. Keppel Offshore & Marine’s (KOM) recorded a significantly reduced net loss and was EBITDA positive.
– Significant progress made on advancing the sale of KOM legacy rigs and associated receivables, working towards definitive agreements by 30 April 2022.
– Maintain BUY with unchanged SOTP TP of S$7.07. We valued the Group based on the four new segments unveiled during Vision 2030 to better reflect the Group’s reporting segments going forward. Our TP translates to about 1.0x FY22e book value, in-line with its 5-year average. Catalysts expected from a successful resolution of its O&M unit.