Stocks may extend a rally Monday but questions abound about how long the bear market can be kept at bay amid high inflation, monetary tightening and the risk of a recession.

Futures rose for Japan, Australia and Hong Kong after a near-5% jump in global shares last week, the best such performance in a month, as investors snapped up beaten-down shares in defensive sectors like healthcare and technology.

Contracts for the S&P 500 and Nasdaq 100 fluctuated in early Asian trading, while the dollar was mixed against major peers.

Treasury yields have retreated as worries about economic growth take centre stage, leaving the US 10-year yield at 3.13%. Whether that marks the end of the worst Treasury bear market of the modern era is another live debate.

Oil dropped to about $106 a barrel. The Group of Seven nations is evaluating a potential price cap on Russia crude over its invasion of Ukraine. 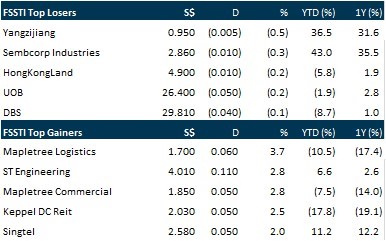 Food and beverage (F&B) company Katrina Group announced on Saturday (Jun 25) that chief executive officer Alan Goh Keng Chian has received a notice to attend an interview in relation to an investigation by the Urban Redevelopment Authority (URA). The URA investigation involves possible breaches of the minimum stay requirement by ST Hospitality and its subsidiaries. Katrina on Jun 22 had also announced that 2 employees – a senior employee and a junior employee – of subsidiary ST Hospitality are assisting with the URA investigation. Katrina said that the investigation is ongoing, and no charges have been filed against the group nor any of the relevant persons as at Jun 25.

The Consumers Association of Singapore (Case) is calling for stronger consumer safeguards for buy now, pay later (BNPL) schemes, in the hopes that these moves will ultimately help consumers “enjoy a seamless and smooth BNPL experience”. In an article posted on the consumer watchdog’s website on Friday (Jun 24), Case president Melvin Yong noted that the association received 18 consumer complaints involving BNPL service providers from Jan 1, 2021 to Jun 23 this year. These complaints included technical issues with payments, as well as the inability of consumers to seek refunds. Although Yong acknowledged that such disputes are “unfortunately inevitable”, he said that relevant parties in Singapore need to do more to shape the “nascent” BNPL scene.

Spirit Airlines said on Friday (Jun 24) it has renewed its support for a merger deal with Frontier Group after Frontier raised its cash offer by US$2 per share to buy the rival ultra-low-cost carrier, according to a regulatory filing. On Monday, JetBlue Airways sweetened its takeover offer for Spirit to US$33.50 per share, an increase of US$2, as it sought to convince Spirit’s board to agree to its deal. Frontier’s offer, at its closing price on Friday, is worth US$24.29 in stock and cash. Spirit’s board said on Friday that based on the improved offer from Frontier it “reiterates its unanimous recommendation that Spirit stockholders vote” in favour of the merger.

Software maker Zendesk agreed to be acquired by a group of buyout firms led by Hellman & Friedman and Permira for about US$9.5 billion. The all-cash transaction offers shareholders US$77.50 a share, a premium of 34 per cent over Zendesk’s closing stock price on Thursday (Jun 23), the company said in a statement on Friday. The stock jumped about 29 per cent to US$74.75 on the news. Including debt, the deal is valued at about US$10.2 billion. The announcement comes after Zendesk said earlier this month that it would remain independent after failing to find a potential buyer. The San Francisco-based company said Jun 9 that it would no longer seek to sell itself after a strategic review that reached out to 16 potential strategic partners and 10 financial sponsors. Ultimately, “no actionable proposals were submitted,” Zendesk said in a statement, and final bidders cited “adverse market conditions and financing difficulties at the end of the process”.

With global tensions rising over Ukraine, the cutthroat competitiveness of the US financial sector is yielding to partnership over the conviction that a cyberattack against even a group of minor banks – or a third-party service provider – could imperil everyone in a highly connected system. Some of the nation’s largest banks are now working with the Treasury Department, engaging in role play and sharing information they would have guarded closely in the past. “You’re only as good as your weakest link,” said Ron O’Hanley, chief executive officer of State Street, one of the largest US money managers and custody banks. “Networks are put together not just by what you’re doing, but the vendors you’re relying on, the counter-parties you’re dealing with, even regulators you’re dealing with,” he said in an interview.

The US dollar slipped on Friday (Jun 24) and posted its first weekly decline this month, as traders pared back bets on where interest rates may peak and brought forward their outlook on the timing of rate cuts to counter a possible recession. A significant factor during the week has been the fall in oil and commodity prices, which has eased inflation fears and allowed equity markets to rebound. This has eroded the safe-haven bid that has been boosting the dollar against major currencies.

US crypto firm Harmony said on Friday that thieves stole around US$100 million worth of digital coins from one of its key products, the latest in a string of cyber heists on a sector long targeted by hackers. Harmony develops blockchains for so-called decentralised finance – peer-to-peer sites that offer loans and other services without the traditional gatekeepers such as banks – and non-fungible tokens. The California-based company said the heist hit its Horizon “bridge”, a tool for transferring crypto between different blockchains – the underlying software used by digital tokens such as bitcoin and ether.

Del Monte Pacific Limited – Stellar 38% earnings growth
Recommendation: BUY (Maintained), Last Done: S$0.37
Target price: S$0.69, Analyst: Paul Chew
– 4Q22 PATMI jumped 38% YoY. The results were better than expected. FY22 revenue and PATMI were 101%/105% of our FY22e forecasts. Despite a one-off US$2mn stock compensation, the 4Q22 earnings beat was from lower operating expenses. Final dividends up 42% YoY to 1.70 cents.
– US subsidiary DMFI registered a 4-fold jump in PATMI in 4Q22 to US$19mn. Gross margins recovered QoQ from 21% to 25% due to higher selling prices and new products contributing 5% to revenue.
– Consumer staples are enjoying a lift in demand as US households dine more at home as food inflation escalates. The Philippines is expected to remain weak with consumers shifting away from less essential canned fruits. EPS will also benefit from lower interest expenses and preference dividends. We maintain our BUY recommendation with a higher TP of S$0.69, from S$0.63. Despite a cut in gross margin assumption, our FY23e PATMI is raised by 9% from lower operating expenses. Our TP is pegged to 10x FY22e P/E, a 30% discount to the industry valuation due to its smaller market cap and higher gearing. Del Monte valuations are attractive at 5x PE FY23e and pay a 6% dividend yield.