Stocks in Asia look set for a soft start on Tuesday after a global bounce from a bear market stalled in the US amid a climb in crude oil prices and Treasury yields.

China’s bourse has become a bright spot in an otherwise dour backdrop. The CSI 300 is up more than 5% this quarter, compared with a 14% drop in global shares. Central bank Governor Yi Gang vowed to maintain supportive monetary policy to boost the economy’s recovery from Covid and other stresses.

Treasuries fell after weak demand at auctions. The 10-year yield climbed back to around 3.2%. The dollar was little changed. Crude rose toward $110 a barrel — Libya and Ecuador flagged potential output cuts on political unrest. 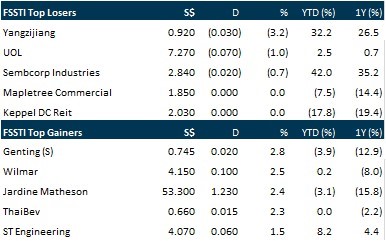 Catalist-listed Axington Inc may have breached Catalist rules on corporate disclosures and internal controls over a placement announcement in 2020, according to an independent review released on Monday (Jun 27). The company may also have potential claims against its former directors Marjory Loh and Michael Wong, and the Loh cousins of scandal-hit Bellagraph Nova Group, over breaches of duties, said the review by TSMP Law Corp. However, commencing civil action against these individuals would not be meaningful or in the best interests of its minority shareholders, Axington’s board said in a Monday filing accompanying TSMP’s report.

Nike beat estimates for quarterly revenue on Monday (Jun 27), as strong demand for its athletic apparel and sneakers in Europe helped the company counter lower sales in China following pandemic-related lockdowns in the country. The company’s shares rose about 1 per cent to US$111.80 after the bell and Nike also announced a new US$18 billion class B stock repurchase plan. Affluent customers remain largely unaffected by decades-high inflation and are splurging on higher-priced products, helping Nike sustain a pandemic-induced boom in athletic wear sales. The company’s sales in Europe, Middle East & Africa rose 9 per cent to US$3.25 billion in the reported quarter. Sales in Greater China fell 19 per cent, hurt by strict Covid-19 lockdowns.

For years, investors valued Facebook’s parent company as if its growth would never falter. Now that it has, fund managers who buy cheap, out-of-favour stocks are finally getting a chance to own shares of Meta Platforms Inc. Stock pickers at value firms Dodge & Cox, First Eagle Investment Management and Artisan Partners bought millions of Meta shares this year. Index-tracking investors now will be buying too: After FTSE Russell’s annual overhaul of its equity benchmarks, Meta on Monday (Jun 27) joined other former growth darlings Netflix Inc and PayPal Holdings Inc in the firm’s value indexes, which serve as the basis for billions of dollars of passive portfolios.

Prosus is planning to sell more of its US$134 billion stake in Chinese Internet giant Tencent Holdings Ltd to finance a buyback programme, reversing a pledge to hold onto the full shareholding despite regulatory uncertainty. Tencent erased earlier gains in Hong Kong on Monday (Jun 27) as investors pondered the extent to which Prosus, the Chinese company’s biggest shareholder, will unload its stock. The shares fell as much as 2.5 per cent and traded 1.8 per cent lower as of 3.20 pm local time.

Goldman Sachs Group analysts downgraded Coinbase Global to a sell rating as the crypto winter continues to take its toll on the struggling digital currency exchange. Shares of the firm slumped as much as 11 per cent to US$56.02 on Monday (Jun 27), putting them on track to extend their 75 per cent decline this year with Bitcoin now at less than half its value from just 6 months ago. Goldman analyst William Nance cited the “continued downdraft in crypto prices” and the broader drop in activity levels across the industry. “We believe Coinbase will need to make substantial reductions in its cost base in order to stem the resulting cash burn as retail trading activity dries up,” Nance wrote in a note on Monday.

Crypto broker Voyager Digital has issued a notice of default to hedge fund Three Arrows Capital (3AC)for its failure to make required payments on a loan of 15,250 BTC and $350 million USDC, Voyager said in a statement on Monday (Jun 27). The broker said it intended to pursue recovery from 3AC and is in discussions with its legal advisors concerning the legal remedies available.

The US dollar struggled versus its major rivals on Monday (Jun 27) as softening inflation expectations prompted a reassessment of the prospects for aggressive interest rate hikes but volatile markets cushioned a broader decline. Aggressive rate hike bets have boosted the US dollar with an index rising to a near 2-decade high of 105.79 earlier this month. But with some high-frequency data indicators showing economic momentum starting to cool and a broader drop in commodity prices, investors are becoming cautious.