Singapore shares ran out of steam and traded underwater through most of Tuesday (Jun 28), although an uphill struggle in the final hour paid off with marginal gains, as caution set in with lingering inflation and recession worries. The Straits Times Index (STI) finished 2.67 points or 0.09 per cent higher at 3,140.21, following an overnight pause in US stocks’ relief rally.

Wall Street stocks tumbled on Tuesday (Jun 28) as a gloomy consumer confidence report offset positive news about China’s move to scale back Covid-19 restrictions. Equities opened solidly higher but dropped into negative territory soon thereafter following a consumer confidence reading at its lowest level in more than a year on surging inflation. The downcast report was due in part to the feeling higher prices would persist, suggesting consumers aren’t sure the Federal Reserve’s aggressive efforts to tame inflation will work. The Dow Jones Industrial Average dropped 1.6 per cent, a loss of nearly 500 points, to close at 30,946.99. The broad-based S&P 500 shed 2.0 per cent to 3,821.55, while the tech-rich Nasdaq Composite Index sank 3.0 per cent to 11,181.54. 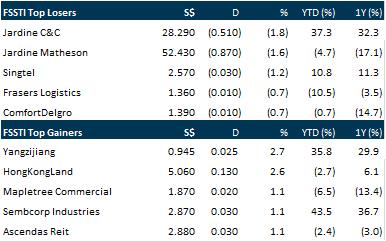 Ma Zhi has been terminated from his role as an executive director of Raffles Infrastructure after internal investigations, the company disclosed in a Tuesday (Jun 28) bourse filing. “(Ma) had failed to meet the standards of the duties and obligations of an executive director of the company,” Raffles Infrastructure said in the filing, adding that the decision was based on documentary evidence. Further details were not provided. Ma had been appointed to the role in April 2020. According to the company’s website, his other roles include serving as the non-executive director of China Moutai Tasting Centre (Hong Kong Limited) and as a partner in GSR Capital. He had started out as a reporter and producer at CETV Station in 2003, before embarking on a corporate career. Shares of Raffles Infrastructure closed flat at S$0.06 on Tuesday.

DBS has inked an agreement to sell 33 Changi North Crescent (33CNC), a property which the bank had previously taken possession of from embattled Tee International. In a bourse filing on Tuesday (Jun 28), Tee disclosed that DBS has entered into a sale and purchase agreement with Applied Materials South East Asia for 33CNC, with the completion expected to take place on or around July 18. The aggregate sale consideration for 33CNC was determined based on the fair value of the property of S$18 million. DBS will use the proceeds to satisfy outstanding amounts owed by Tee to the bank, as well as to other creditors who have a security over the sale proceeds of the property. It will also cover transaction expenses incurred by DBS. In February, Tee received an order on Feb 17 to assist the Commercial Affairs Department with an investigation regarding an offence under the Securities and Futures Act. Trading in shares of Tee has been suspended since mid-2021.

The 10-year average return for the July issue of Singapore Savings’ Bond (SSB) soared to one of its highest at 2.71 per cent, just a few basis points short of its last peak in November 2015. The first-year interest rate for the SSB stands at 1.69 per cent, while its 10-year interest rate was offered at 3 per cent. The higher interest rates reflect the tightening economic environment in recent times, coupled with expectations of further rate hikes from the Fed after it raised benchmark interest rates three-quarters of a percentage point — representative of its most aggressive hike since 1994. Published forecasts also showed that most policymakers expect rates would rise to 3.4 per cent by the end of the year. The maximum amount offered in the upcoming issue of SSBs is capped at S$600 million. The first interest payment will be made on Jan 1, and subsequently pay out every 6 months on Jul 1 and Jan 1 until maturity. Applications for the last round of bonds issued in June totaled S$916.5 million, though only S$350.0 million were alloted. The first-year interest rate was 1.43 per cent and the 10-year interest rate stood at 2.71 per cent. The average return over 10 years was valued at 2.53 per cent per annum.

Leaders of the Group of Seven rich nations on Tuesday watered down a key pledge on ending fossil fuel financing abroad, as the need to tackle global warming clashed with fears over energy shortages. The G-7 countries – Britain, Canada, France, Germany, Italy, Japan and the United States – ended a summit in the Bavarian Alps by reaffirming their goal to reduce reliance on dirty fossil fuels and speed up the green energy transition. But after 3 days of haggling, they also agreed to allow public investment in new international fossil fuel projects under certain conditions, as countries scramble to break free from Russian oil, coal and gas following the invasion of Ukraine. German Chancellor and summit host Olaf Scholz “promised a crucial boost for international climate action and he didn’t deliver,” said Friederike Roder, vice president at the non-profit group Global Citizen. An alliance of civil society organisations including Oil Change International also issued a scathing verdict, condemning the “loopholes” on gas that made it into the final communique. The text reiterates that G-7 nations will still halt new public investments in overseas fossil fuel projects by the end of 2022.

The US trade deficit in goods narrowed in May as exports increased, suggesting that trade could contribute to economic growth this quarter for the first time in nearly two years. The goods trade deficit fell 2.2 per cent to US$104.3 billion, the Commerce Department said on Tuesday. Goods exports rose US$2.0 billion to US$176.6 billion. Imports of goods slipped US$0.4 billion to US $280.9. A record trade deficit weighed on the economy in the first quarter, resulting in gross domestic product declining at a 1.5 per cent annualised rate. Trade has subtracted from GDP for seven straight quarters.

Uber Technologies and Australia’s main transport union agreed on Tuesday to back a federal body that enforces minimum pay for the company’s drivers, joining a global thawing of relations between the ride-hailing giant and industrial bodies. In a joint statement, Uber and the Transport Workers Union (TWU) said they signed an agreement to support an unspecified federal body to “set minimum and transparent enforceable earnings and benefits/conditions for platform workers”. The new body would also oversee disputes that resulted in drivers in the so-called “gig economy” having their accounts shut off, and protect drivers’ rights to organise with a “collective voice”, the statement said. The move, though largely symbolic, reflects a broader response by the San Francisco tech giant to pressure from unions around the world to put a floor under wages that supersedes its fee-setting algorithms.