U.S. stocks closed slightly higher following a choppy session, and bond yields remained near their highest levels in three years, with investors preparing for a campaign of interest-rate increases from the Federal Reserve. Stocks rose at the open, lost ground throughout the morning and then recovered to finish the day. The S&P 500 added 32.46 points, or 0.7%, to close Monday at 4575.52. Consumer discretionary, technology and real-estate stocks rose, while energy shares led the benchmark’s decliners. The tech-focused Nasdaq Composite rose 185.60 points, or 1.3%, to 14354.90, while the Dow Jones Industrial Average added 94.65 points, or 0.3%, to close at 34955.89. The moves followed last week’s rebound, as stocks rose for a second consecutive week.

The yield on the 10-year Treasury note declined to 2.476%, while the yield on the 2-year Treasury note climbed to 2.340%. Investors are eyeing the possibility of a so-called yield inversion, where the two-year note yields more than the 10-year, which is historically tracked as a predictor of recession. Oil prices fell after Shanghai imposed stringent pandemic restrictions that could weaken energy demand in China. Brent crude futures, the international benchmark, declined $8.17 a barrel, or 6.8%, to $112.48. 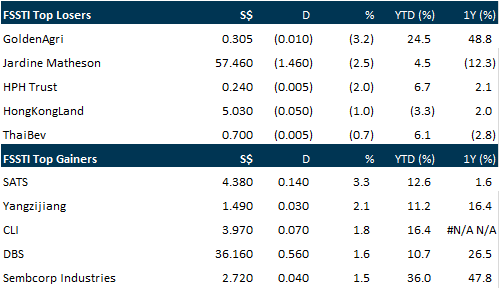 Mainboard-listed Venture Corporation will temporarily halt its operations in Shanghai for a short period this week, after Shanghai’s city government announced that the city will go through a two-phase lockdown for 9 days, starting with residents to the east of the Huangpu river. In response to The Business Times’ queries, the company said it will continue to monitor the situation closely as it evolves and that the safety and well-being of its employees remains its top priority. Its initial assessment of the lockdown suggests that there is no significant impact to the business.

From April 4, ComfortDelGro will be temporarily increasing distance fares on all its taxis due to a spike in fuel prices, said the transport company on Monday (Mar 28). For regular taxis, distance-timed rates will rise by 1 Singapore cent every 400m (or every 350m after 10km) and waiting-time fees will go up by 1 cent every 45 seconds. The flagdown fare, which was increased from March 1 by 20 cents, will remain unchanged, said ComfortDelGro in a media release. This means that fares will increase by about 32 Singapore cents for every 10 km travelled.

Singtel’s technology services arm NCS has acquired a digital services company in Australia, ARQ Group, for A$290 million (S$296.8 million), as part of its regionalisation plans, it said on Monday (Mar 28). ARQ is a Melbourne-based digital consultancy group specialising in mobile applications, cloud and data analytics. The acquisition will be NCS’s fourth in Australia in the past 15 months

The trustee-manager of Keppel Infrastructure Trust (KIT) has proposed new base fee and performance fee structures pegged to distributable income and distribution per unit (DPU) growth respectively. The move will help the trustee-manager better align its interests with the business trust’s unitholders and support KIT’s growth plans, it said in a bourse filing on Monday (Mar 28). The trustee-manager is proposing its base fee be amended to 10 per cent per annum of KIT’s distributable income, versus its existing base management fee of S$2 million per annum.

Koufu will be delisted from the Singapore Exchange (SGX) mainboard on Tuesday (Mar 29) at 9 am, following the completion of Dominus Capital’s compulsory acquisition of shares from dissenting shareholders of Koufu. Koufu’s founders in December 2021 made a S$0.77 per share cash offer to take the company private.

Technology specialist TalkMed Group on Monday (Mar 28) said it received in-principle approval from the Singapore Exchange (SGX) on Mar 25 for its transfer to the bourse’s mainboard. The company will be seeking shareholder approval for the proposed transfer at an extraordinary general meeting which will be held at a date to be confirmed.

Tesla will seek investor approval to increase its number of shares to enable a stock split in the form of a dividend, the electric-car maker said on Monday (Mar 28), sending its shares up 5 per cent before the bell. The proposal has been approved by its board and the shareholders will vote on it at the annual meeting. The stock split, if approved, would be the latest after a 5-for-1 split in August 2020 that made Tesla shares cheaper for its employees and investors.

Tesla Inc is extending the production pause at its Shanghai plant to Thursday following the city’s move into a phased lockdown to curb a surge in Covid-19 cases, people familiar with the matter said. Originally suspended for a day, production at the Gigafactory near China’s main financial centre will now be halted for four days, to resume at this stage on April 1, said the people, who asked not to be identified because they’re not authorized to speak publicly.

Shopee, the e-commerce arm of South-east Asia’s Sea, said in a statement on Monday (Mar 28) that it is closing down its India operations “in view of global market uncertainties”. The Singapore-headquartered technology group launched in India in October 2021 as part of an international push that saw it expand into Europe. The retrenchment comes weeks after Shopee announced it was pulling out of France and after India banned Sea’s popular gaming app Free Fire.

Apple Inc is planning to lower iPhone and AirPod production due to a demand slowdown caused by the Ukraine crisis and rising inflation, the Nikkei newspaper reported on Monday, citing sources briefed on the matter. The company plans to produce 20 per cent fewer iPhone SEs – or about 2 million to 3 million units – next quarter than originally planned, the report said. It added that Apple has also reduced 2022 orders for AirPods by more than 10 million units.