Stocks in Asia looked set for a tailwind Tuesday after gains in the technology sector helped to push U.S. shares higher. Crude oil jumped on the prospect of tougher sanctions on Russia over the war in Ukraine. Futures rose for Japan and Australia, while those for the U.S. were steady. Tech stocks on Wall Street climbed after Elon Musk, the world’s richest man, ignited a Twitter Inc. rally by disclosing a 9.2% stake in the social media platform.

U.S.-listed Chinese equities surged on easing fears about potential delistings after Beijing moved toward meeting audit disclosure requirements. Markets in Hong Kong and China are closed Tuesday for holidays. Commodities including oil and wheat advanced amid renewed fears about supply disruptions stemming from the war. The European Union is working on new Russian sanctions for alleged atrocities, while the U.S. said it may impose further penalties this week.

Treasuries were mixed, with the spotlight remaining on flat or inverted yield curves pointing to an economic downturn should the Federal Reserve deliver a series of aggressive interest-rate hikes to tamp high inflation. 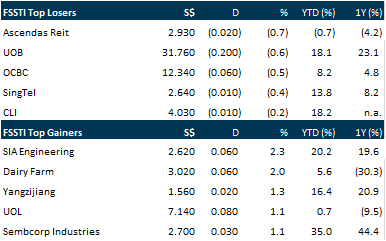 Capitaland Development (CLD) is investing in 2 prime residential sites in China as it banks on a recovery amid headwinds in China’s real estate sector. In a statement released on Monday (Apr 4), CapitaLand Group’s development arm said it has landed 1 site each in Wuhan and Chengdu for a total of 3.49 billion yuan (about S$748 million). The developer is looking to construct 1,581 quality homes on the two sites, targeting first-time home buyers and upgraders, lifting its residential pipeline under development to 19,139 units. Sealed for 2.31 billion yuan, the 45,709 sq m site in Wuhan’s central business district has a gross floor area (GFA) of 146,000 sq m and will yield 1,058 residential units. Meanwhile, the Chengdu site, bagged for 1.18 billion yuan, is located in the Chenghua District and covers an area of 29,382 sq m, with a GFA of 73,453 sq m. Construction for the 2 projects is slated to begin this year.

Cromwell European Reit issued some 1.3 million new units at an issue price of 2.2409 euros per unit last Thursday (Mar 31), bringing up the number of issued units to 562.4 million. Announcing this in a bourse filing on Monday (Apr 4), the real estate investment trust’s (Reit) manager said the new units were issued under a distribution reinvestment plan in respect of its distribution of 0.08459 euro per unit for the second half of last year. A distribution reinvestment plan is a programme that lets investors reinvest their cash dividends into additional shares or fractional shares of the stock on the dividend payment date. The new units rank pari passu in all respects with the existing units, the Reit manager added. Units of Cromwell European Reit closed down 1.3 per cent or 0.03 euro at 2.28 euros on Monday.

A fully digitalised task management system and reusable window masks for aircraft that are being repainted were among the internal creative triumphs that SIA Engineering Company (SIAEC) put on display at launch of its Innovation Week on Monday (Apr 4). These ideas were hatched and implemented as SIAEC tried to reposition itself during the significant downturn in business during the pandemic. After launching the second phase of its transformation programme in January last year, SIAEC is on track to spend the S$40 million it had originally estimated in November 2020 on such new initiatives. Speaking to the media at the launch of its Innovation Week, chief executive Ng Chin Hwee said that he was impressed by the ingenuity of employees who had injected their own ideas to improve both productivity and safety of the company’s operations.

Wing Tai Holdings’ Malaysian subsidiary has sold its property at 166A Rifle Range Road in Penang for RM17.5 million (S$5.6 million). The aggregate consideration for the disposal of the property, which comprises a leasehold land and a 5-storey factory building, is higher than RM13.7 million net book value as at Monday (Apr 4), Wing Tai said in a bourse filing on Monday. The buyers are Dapper Corporation and Chiao Huat, which are not related to Wing Tai, its subsidiaries nor its controlling shareholders.

Vertex Venture Holdings (Vertex Holdings) posted a net profit of US$530.9 million for the financial year ending Dec 31 last year, reversing a net loss of US$40.4 million the year before. The net profit for FY2021 comes on the back of a 69.5 per cent increase in its total fair value of investments to US$2 billion from US$1.2 billion, said the venture capital firm in a bourse filing on Monday (Apr 4). It includes unrealised gains totalling US$962.7 million. The share of results from its associates came in at US$537.7 million, a 500 per cent increase from US$89.4 million, while its revenue jumped by 8,173.9 per cent, climbing from US$900,000 to US$79.3 million over the same period. Its earnings before interest and taxes grew to US$614 million from a loss of US$32.5 million the year before. This is the company’s first earnings announcement after its special purpose acquisition company, Vertex Technology Acquisition Corporation (VTAC), went public on the Singapore Exchange on Jan 20.

Oiltek International’s subsidiary in Malaysia has secured new contracts amounting to some RM49.2 million (S$15.8 million) to date for its current fiscal year ending Dec 31, 2022. In its announcement on Monday (Apr 4), the Catalist-listed company said its most recent contract win entails the design, fabrication, supply and commissioning of a crude palm kernel oil refinery plant and a lauric refinery plant with ice condensing vacuum systems in Indonesia. The refinery plants will each have a capacity of 1,500 metric tonnes per day and 600 metric tonnes per day, respectively, upon completion.

Citigroup is among underwriters that have temporarily paused initial public offerings (IPOs) of new US special purpose acquisition companies (SPACs) until they get more clarity on the potential legal risks posed by recently proposed rules, according to people with knowledge of the matter. The New York-based bank is awaiting feedback from legal advisers regarding underwriter liability among other topics, said the people, who requested anonymity because the bank’s decision isn’t public. The firm has no plans to exit the business, some of the people said. Last week, the Securities and Exchange Commission (SEC) issued a sweeping plan for tightening oversight of SPACs after US lawmakers and investor advocates argued the listings were bypassing rules imposed on traditional IPOs and exposing retail shareholders to risks.

Howard Schultz’s first day back at the helm of Starbucks kicked off with an announcement that the coffee chain is suspending stock buybacks to invest back into operations. Shares of the company fell nearly 3% in premarket trading on the news. The decision comes as Starbucks faces a union push from its baristas. To date, nine of its locations have voted to unionize, including a cafe in its hometown of Seattle and its Reserve Roastery flagship in New York City. More than 180 company-owned locations have filed petitions for a union election, although that is still a small fraction of Starbucks’ overall U.S. footprint of nearly 9,000 stores. In a letter to workers, Schultz said his first task is to spend time with employees. Another job he deemed essential was suspending the company’s share repurchase program.

Do Kwon, the founder of Terraform Labs, which powers the Terra blockchain, said the Bitcoin market is “liquid” enough to handle any potential de-pegging of its stablecoin. “People need to have a little bit more faith in crypto,” the South Korean entrepreneur said during an interview Monday (Apr 4) on Bloomberg Quicktake. “If you look at Bitcoin, it turns over more than US$20 billion per day and I think with time, it’s going to be even more liquid.” Terra has been the talk of the cryptocurrency market since Kwon announced last month that it will eventually buy US$10 billion in Bitcoin to serve as a reserve to back its decentralised stablecoin. The coins are used to facilitate trading on exchanges by minimising the volatile price swings seen by most cryptocurrencies. Kwon’s Singapore-based Luna Foundation Guard has helped purchase more than US$1.4 billion of Bitcoin so far.

– The STI was up 9.1% in 1Q22. This was its best performance since an 11.3% rally in 1Q21.
– The global economy is facing stagflation shock. Inflation made worse by the Russia-Ukraine conflict and global growth to decelerate as interest rates climb.
– The Singapore market stands out as a shelter in the current stagflation environment. Bank earnings will enjoy a lift as interest-rates rise and reopening of borders a further boost for corporate earnings.