Singapore shares rose on Monday (Jul 4) amid mixed trading in regional markets, led by strength in financial stocks. The benchmark Straits Times Index (STI) climbed 0.8 per cent or 24.65 points to close at 3,120.24. Local banks were among the top performers, with OCBC rising 1.1 per cent to S$11.42 and DBS climbing 1.7 per cent to close at S$30. UOB shares jumped 2 per cent to S$26.68, finishing at the top of the index performance table. Shares of Jardine Cycle & Carriage were the top STI decliner after falling 1.3 per cent to close at S$27.75. Shares of seafood supplier Oceanus were the most actively traded by volume. The counter fell 5.9 per cent to close at S$0.016 after 76.5 million shares worth S$1.3 million changed hands. 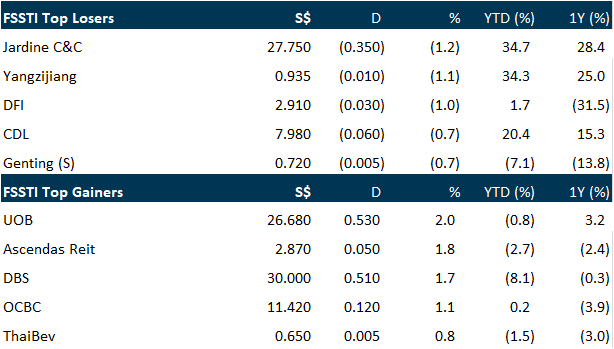 Oxley Holdings said in a business update on Monday (Jul 4) that it intends to focus its property development activities in developed countries such as the United Kingdom and Ireland as it deems them to be “relatively more politically stable and transparent”. In its update, the property developer noted that it has S$305 million of unbilled contract value in the overseas market that will be recognised as revenue upon projects obtaining their temporary occupation permits (TOPs). It also highlighted its Riverscape development, which overlooks Lyle Park and River Thames in London, UK, as well as a mixed-use development located at Connolly Station, which is at the busiest railway station in Dublin, Ireland. The Riverscape development, in which the company has a 50 per cent stake, has a total gross development value (GDV) of S$683 million. The company also owns a 90 per cent stake in the Connolly Station development, which has an estimated GDV of S$1.4 billion. Both projects are expected to obtain TOP status in 2025. Shares of Oxley closed 1.2 per cent or S$0.002 higher at S$0.17 on Monday.

Singapore-based crypto lending and trading platform Vauld said on Monday (Jul 4) that it would suspend withdrawals and trading and seek new investors, the latest sign of stress in the embattled crypto industry. Vauld chief executive Darshan Bathija said in a blog post that it was facing “financial challenges” due to “the volatile market conditions, the financial difficulties of our key business partners inevitably affecting us, and the current market climate, which has led to a significant amount of customer withdrawals in excess of a US$197.7 million since Jun 12”. The crypto industry has been shaken by a series of collapses in recent months, including the failure of so-called stablecoin TerraUSD, large US-based lender Celsius network pausing withdrawals and Singapore-based crypto hedge fund Three Arrows Capital entering into liquidation. Vauld said it had appointed legal and financial advisers, was in discussions with potential investors, and would also apply to the Singapore courts for a moratorium that would have any proceedings against it halted to give it time to carry out a restructuring.

Frank Khoo has resigned from his position as City Developments Limited’s (CDL) group chief investment officer. According to a filing posted on SGX, Khoo is leaving CDL for “personal reasons”. Khoo served the position for more than four years. His last day with CDL will be Sept 30, 2022. As the group chief investment officer, Khoo assisted the group CEO in the sourcing and execution of new investment opportunities, while also setting up a dedicated fund management platform. Shares in CDL closed 6 cents lower or 0.75% down on July 4 at $7.98.

An energy-starved world is turning to coal as natural-gas and oil shortages exacerbated by Russia’s war against Ukraine lead countries back to the dirtiest fossil fuel. From the U.S. to Europe to China, many of the world’s largest economies are increasing short-term coal purchases to ensure sufficient supplies of electricity, despite prior pledges by many countries to reduce their coal consumption to combat climate change. The global competition for coal—also now in short supply after years of declining investment in new mines and resources—has driven benchmark prices to new records this year. Spot coal prices at Australia’s Newcastle port, a key supplier to Asia, topped $400 a ton for the first time last month. The push is being led by Europe, which is boosting coal purchases to ensure it can keep power flowing to homes and factories after Russia cut gas supplies to the continent. Germany, which has promised to eliminate coal as a power source by 2030, is among the nations now importing more. Economy Minister Robert Habeck called the increased reliance on coal bitter but necessary.

The pandemic-era boom in semiconductors that spurred a global shortage is showing its first signs of weakness, driven by a slump in personal-computer sales and a rout in cryptocurrency markets. The frenzy to buy laptops and other gadgets early in the Covid-19 pandemic has vanished as inflation dissuades people from upgrading machines that they bought in the past couple of years amid the shift toward remote work and learning. The fading of the crypto boom has also put an end to early pandemic scenes of people camping outside computer stores to buy chips for cryptocurrency mining and high-end videogaming. Now, chip companies, including giants Intel Corp and Nvidia Corp are warning of rockier months ahead after two years of surging demand across their product lineups, pointing to a chillier consumer climate.

A slide in all manner of raw-materials prices—corn, wheat, copper and more—is stirring hopes that a significant source of inflationary pressure might be starting to ease. Natural-gas prices shot up more than 60% before falling back to close the quarter 3.9% lower. U.S. crude slipped from highs above $120 a barrel to end around $106. Wheat, corn and soybeans all wound up cheaper than they were at the end of March. Cotton unraveled, losing more than a third of its price since early May. Benchmark prices for building materials copper and lumber dropped 22% and 31%, respectively, while a basket of industrial metals that trade in London had its worst quarter since the 2008 financial crisis. Many raw materials remain historically high-price, to be sure. And there are matters of supply and demand behind the declines, from a fire at a Texas gas-export terminal to better crop-growing weather. Yet some investors are starting to view the reversals as a sign that the Federal Reserve’s efforts to slow the economy are reducing demand.

Phillip 3Q22 Singapore Strategy – Demand destruction spiral
Analyst: Paul Chew
– The STI was down 9.1% in 2Q22. After reversing all the gains chalked up this year, the index was flat in 1H22.
– The global economy is facing a downward spiral of demand destruction, caused by a duet of higher inflation and interest rates.
– Economic conditions in Singapore remain resilient. Industrial growth is hovering at 9% this year, FDI is close to the record levels of 2019 and employment is surging with record vacancies.