Singapore stocks ended lower on Tuesday (Jul 5), bucking the regional trend as most markets in the Asia-Pacific rose. The benchmark Straits Times Index (STI) fell 0.5 per cent or 16.13 points to close at 3,104.11. Just 2 of the 30 STI constituents ended the day in positive territory, with DBS up 0.23% and 0.15% for Keppel Corp. CapitaLand Integrated Commercial Trust was the most actively traded counter by value with some 53.8 million units worth S$111.4 million traded and Jardine Cycle & Carriage ended at the bottom of the index performance table after sliding 3.7 per cent to S$26.72.

THE Dow fell on Tuesday as recession fears pounded petroleum-linked equities, but tech shares rallied with markets eyeing chances for less severe interest rate hikes in light of the weakening economic outlook. After a bruising morning spent deep in negative territory, US equities rallied in the afternoon, enabling two of the three major indices to finish higher. The shift came as the yield on the 10-year US Treasury note, a proxy for interest rates, fell further below three per cent. The tech-rich Nasdaq Composite Index ended up 1.8 per cent at 11,322.24. The Dow Jones Industrial Average declined 0.4 per cent to 30.967.82, while the broad-based S&P 500 added 0.2 per cent at 3,831.47. 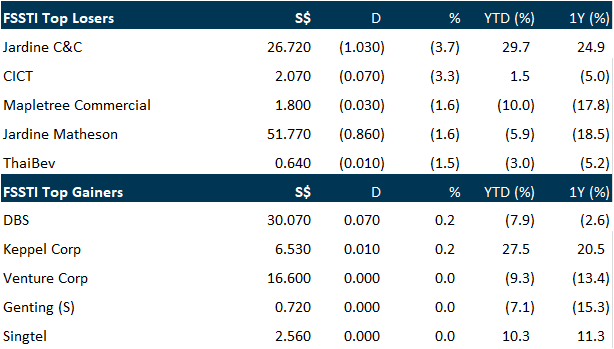 MAPLETREE Commercial Trust (MCT) announced in a bourse filing on Tuesday (Jul 5) that it has appointed former OCBC chief executive Samuel Tsien as a non-executive director of the manager of the real estate investment trust (Reit). Concurrently, Tsien is a non-executive director of Mapletree Investments, the sponsor of MCT, and a member of the sponsor’s investment committee. In addition, he is also a non-executive independent director and audit committee member of Jardine Cycle & Carriage and a non-executive, non-independent director and risk-management committee member of the Singapore Exchange. Tsien had served as the group chief executive and executive director of OCBC for 9 years and then retired in April last year. In May, MCT unitholders voted in favour of a merger with Mapletree North Asia Commercial Trust (MNACT), which led to the creation of Mapletree Pan Asia Commercial Trust (MPACT), one of Asia’s 10 largest Reits. MCT units closed down 1.6 per cent or S$0.03 at S$1.80 on Tuesday before the announcement.

Singapore Airlines (SIA) is adding frequencies and service points to Japan, Los Angeles, Paris and India by December, raising its group capacity to 81 per cent of pre-pandemic levels. The mainboard-listed airline group said in a statement on Tuesday (Jul 5) that the increase in frequencies and service points is in response to strong demand for air travel as the northern winter season (Oct 30 to Mar 25, 2023) approaches. The group will monitor the demand for air travel and adjust its services accordingly, said JoAnn Tan, senior vice-president for marketing planning at SIA. Together with other adjustments to the full-service carrier and its low-cost carrier Scoot network, the SIA group is projected to be flying at around 81 per cent of pre-pandemic levels by December 2022. SIA shares were S$0.05 lower at S$5.08 on Tuesday when market closed, before these additional flights were announced.

The Monetary Authority of Singapore (MAS) is considering tighter measures on cryptocurrency trading platforms, said Tharman Shanmugaratnam, minister in charge of the regulator, in a written answer to a parliamentary question. The authority has already restricted marketing and advertising of cryptocurrency services by cryptocurrency platforms in public areas since January; the tightened curbs have included the removal of cryptocurrency ATMs from public areas. Currently, cryptocurrency platforms are licensed under the digital payment token (DPT) services under the Payment Services Act, which empowers the regulator to impose additional measures to ensure better consumer protections, financial stability and safeguard the efficacy of monetary policy. Fourteen licences have been issued, with 3 issued recently to Crypto.com, Genesis and Sparrow Exchange on Jun 22. The MAS is now considering additional consumer protection safeguards on cryptocurrency platforms. “These may include placing limits on retail participation and rules on the use of leverage when transacting in cryptocurrencies,’ said Tharman.

Oil prices dropped US$6 on Tuesday as concerns about a possible global recession curtailing demand outweighed supply disruption fears, highlighted by an expected production cut in Norway. Brent crude was down US$6.65, or 5.9 per cent, at US$106.85 a barrel by 1344 GMT, and US West Texas Intermediate (WTI) crude fell US$5.65, or 5.2 per cent, to US$102.78 a barrel from Friday’s close. There was no WTI settlement on Monday because of a US holiday. Investors are becoming more concerned as the latest surge in gas and fuel prices adds to worries about recession. Supply concerns still linger, initially lifting WTI and Brent earlier in the session, amid worries about potential output disruption in Norway, where offshore workers began a strike. The strike is expected to reduce oil and gas output by 89,000 barrels of oil equivalent per day (boepd), of which gas output makes up 27,500 boepd, Norwegian producer Equinor has said. Meanwhile, Russia’s former president Dmitry Medvedev said on Tuesday a reported proposal from Japan to cap the price of Russian oil at about half its current level would mean less oil on the market and could push prices above US$300-US$400 a barrel. G-7 leaders agreed last week to explore the feasibility of introducing temporary import price caps on Russian fossil fuels, including oil, in an attempt to limit resources to finance Moscow’s “special military operation” in Ukraine.

Uber Technologies Inc said it was launching its ride-hailing and platform in Israel by connecting to a nationwide network of licensed taxis, as it continues to expand globally. Thousands of taxi drivers — both independent and working for companies — have already joined up, with the service that also includes ride sharing mainly available to passengers in Israel’s two largest cities, Jerusalem and Tel Aviv, it said. Uber, which operates in more than 70 countries and 10,000 cities globally, will compete locally with services such as Gett and Yango. A previous attempt by Uber to operate in Israel was halted by a court in 2017. Israel’s Transportation Ministry, Taxi Driver Union and a rival ride-hailing company had won the injunction after complaining that the U.S. company used drivers who lacked the proper business licenses and insurance.

The US government has received more than 300 requests as of Tuesday to retain the tariffs on Chinese goods imposed by former president Donald Trump. President Joe Biden is considering how and whether to remove some of the tariffs imposed by his predecessor, as he faces growing pressure to offer some relief to soaring US inflation, but is expected to talk first to Chinese leader Xi Jinping. Trump imposed tariffs on about US$350 billion in annual imports from China in retaliation for Beijing’s theft of American intellectual property and forced transfer of technology, but some were set to expire starting on Wednesday unless extended by Washington. As part of a scheduled four-year review, US Trade Representative Katherine Tai’s office has solicited input from stakeholders, and a single request would trigger a review and continuation of the tariffs. By Tuesday evening, USTR had received more than 300 for the US$10 billion in tariffs set to end on Wednesday, and nearly 80 for the next round due to expire August 23. The agency’s website does not identify the firms posting comments, but a source confirmed more than 300 called for the tariffs to be continued.