Stocks in Asia looked set to fall Thursday after the Federal Reserve outlined plans to pare its balance sheet by over $1 trillion a year while hiking interest rates in a push to curb elevated inflation.

Futures declined for Australia, Japan and Hong Kong, while those for the U.S. fluctuated. Technology was among the sectors the led a retreat on Wall Street, saddling the Nasdaq 100 index with its worst two-day loss in nearly a month. Longer tenor Treasuries dropped but shorter maturities climbed, steepening the yield curve, and a gauge of the dollar advanced as investors digested the minutes of the Fed’s March meeting.

The minutes signaled half-point rate increases are under consideration and that the central bank will reduce its massive bond holdings at a maximum pace of $95 billion a month to tighten financial conditions.

Commodity markets continue to be whipsawed by disruptions sparked by Russia’s war in Ukraine and efforts to curb raw-material costs. Oil was around its lowest price since mid-March after the International Energy Agency said it will deploy 60 million barrels from emergency stockpiles to bolster the historic release announced by the U.S. 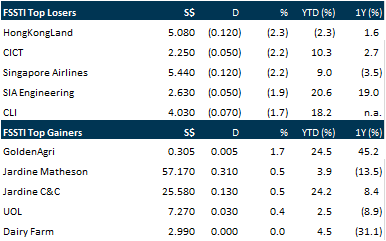 iWOW Technology, a local technology provider that specialises in Internet of Things (IoT) solutions, launched its initial public offering (IPO) on Wednesday (Apr 6) for a Catalist listing on the Singapore Exchange (SGX). The company is looking to sell 26 million shares at S$0.25 apiece, to raise gross proceeds of about S$6.5 million. Net proceeds are expected to come in at about S$5.2 million. This placement represents about 10.4 per cent of iWow’s enlarged share capital of 250.4 million shares. The company will have a theoretical market capitalisation of S$62.6 million after the placement, and a price-to-earnings ratio of 16.9 times. iWOW is one of the manufacturers of TraceTogether tokens. The company and electronics distributor Siix Singapore formed a consortium back in 2020, and went on to win one of the tenders to design and manufacture subsequent batches of the tokens. Another tender went to electronics manufacturer PCI. Other than TraceTogether tokens, iWOW’s other products include smart-metering solutions to remotely monitor water and gas consumption, electronic monitoring devices for ex-offenders and accused persons, and alarm alert systems for the elderly.

Capitaland Investment will be issuing S$400 million worth of senior notes at a fixed rate of 3.33 per cent that are due in 2027. They will be issued at par on Apr 12 under a S$6 billion euro medium term note programme established in November last year, said the real estatement investment arm of property developer CapitaLand in a bourse filing on Tuesday (Apr 5) evening. According to deal stats seen by The Business Times, these notes were oversubscribed by almost twice, with an order book of S$780 million across 80 accounts. Almost an equal number of orders came from private banks (33 per cent) and insurers or funds (30 per cent). Other banks and corporations took up 25 per cent of the orders, while the remaining went to the public sector. The funds raised will be used to refinance the company’s existing borrowings and finance its investments, as well as for other general corporate purposes.

Property developer Oxley Holdings has issued S$50 million worth of notes with a fixed interest rate of 6.9 per cent that are due in July 2024. These notes are its third tranche in a series, issued under a US$1 billion guaranteed euro medium term note programme, said the company in a bourse filing on Tuesday (Apr 5) evening. This third tranche is to be consolidated to form a single series with the first and second tranche, both of which were issued last year, under the same programme. The first comprises notes amounting to S$70 million, while the second one is worth S$85 million. Oxley said that certain controlling shareholders, as well as entities or individuals related to them, will be subscribing for about 40 per cent of this third tranche of notes. This means they would be subscribing to about 34 per cent of the entire series of notes, thus giving them substantial holding.

Hatten Land‘s new partner has already delivered 80 per cent, or 40 of the pilot batch of 50 Bitmain Antminer S19J Pro crypto mining rigs originally due end-April. In response to queries from the Singapore Exchange (SGX), Hatten Land on Tuesday (Apr 5) said the first 40 pilot batch machines have since been installed and are now operating smoothly, mining Bitcoins continually and around the clock on an automated basis. Its agreement with the new partner includes an option to deliver an additional 500 rigs within 2022.

Apple said Tuesday that its annual developers conference, WWDC, will begin on June 6. The company will hold a launch event on the first day of the conference. Apple usually unveils new iPhone, iPad, Apple Watch, Apple TV and Mac software at a presentation featuring its CEO, Tim Cook, on the first day of WWDC. WWDC 2022 will be virtual and streamed on Apple’s website. The event runs through June 10. Apple has held virtual events since 2020. The software revealed at WWDC is distributed in beta form over the summer before being widely released alongside new iPhone models in the fall. This year, Apple’s iPhone software will likely be called iOS 16.

Federal Reserve officials discussed how they want to reduce their trillions in bond holdings at the March meeting, with a consensus around $95 billion a month, minutes released Wednesday showed. Officials “generally agreed” that a maximum of $60 billion in Treasuries and $35 billion in mortgage-backed securities would be allowed to roll off, phased in over three months and likely starting in May. That total would be about double the rate of the last effort, from 2017-19, and represent part of a historic switch from ultra-easy monetary policy. In addition to the balance sheet talk, officials also discussed the pace of interest rate hikes ahead, with members leaning toward more aggressive moves. At the March 15-16 meeting, the Fed approved its first interest rate increase in more than three years. The 25 basis point rise— a quarter percentage point — lifted the benchmark short-term borrowing rate from the near-zero level where it had been since March 2020.

President Joe Biden’s top economic adviser said that a shortage of semiconductors last year probably shaved a full percentage point off US economic output in 2021, and that administration officials will brief Congress on the crisis on Wednesday (Apr 6). “We are 100 per cent vulnerable to foreign supply chains on those advanced semiconductors,” the director of Biden’s National Economic Council, Brian Deese, told reporters at a breakfast hosted by the Christian Science Monitor on Wednesday. “The best estimates are that the lack of available semiconductors probably took a full percentage point off of GDP in 2021.” Commerce Secretary Gina Raimondo, White House National Security Adviser Jake Sullivan and Deputy Defense Secretary Kathleen Hicks will hold a classified briefing on Wednesday for lawmakers on the chip shortage, Deese said.

General Motors expects sales of its electric Chevrolet Bolt models can rebound from a high-profile recall after several vehicles caught fire to achieve record results in 2022. “We see record numbers of sales and production for ’22, and we see ‘23 being bigger than ’22. We are bullish on both EV and EUV,” Steve Majoros, vice president of Chevrolet marketing, told media Wednesday. The automaker restarted production and shipments of the Bolt EV and a larger “EUV” version this week. Production of the vehicles at a plant in Michigan had largely been down since August, when the automaker recalled every Bolt that had been produced at the factory since 2016.