Stocks in Asia looked set for a muted start Friday as investors digest the Federal Reserve’s plan for aggressive policy tightening and monitor the economic fallout of China’s Covid lockdowns.

Futures rose for Australia and Japan but dipped for Hong Kong. U.S. contracts fluctuated following modest Wall Street gains Thursday. Global shares are on course for their worst week in four, hurt by the risk of an economic downturn as the Fed tackles high inflation.

Longer-maturity Treasuries fell while the two-year note climbed. The yield curve has steepened in the wake of the Fed minutes on Wednesday, which showed officials are intent on quelling price pressures and outlined plans to pare the central bank’s balance sheet by more than $1 trillion a year.

A dollar gauge advanced for a sixth day, its longest winning streak since the middle of 2021. Oil mostly held recent losses, squeezed by plans to release millions of barrels of crude from strategic reserves. 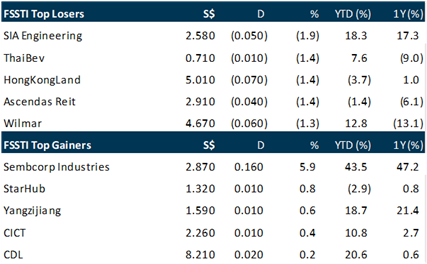 Embattled kitchen systems vendor Kitchen Culture said its wholly-owned subsidiary KHL Marketing Asia-Pacific entered into compulsory liquidation on April 5. The court had on March 18 dismissed the company’s application for judicial management. Kitchen Culture on Thursday (Apr 7) said it did not appeal against the decision, and the winding up application filed by its landlord Kim Hup Lee & Co was therefore granted by the court on April 5. KHL Marketing Asia-Pacific allegedly owes Kim Hup Lee outstanding rental arrears amounting to S$1.8 million for the first, second and third floors of 25 New Industrial Road between 2016 and 2018.

Medical eye-care provider ISEC Healthcare has proposed to acquire 2 specialist eye clinics in Ipoh and Kampar, Malaysia for RM56.7 million (S$18.3 million). Of this amount, about RM36.1 million will be satisfied in cash, while the remaining is to be fulfilled through the issuance of 21.8 million new ISEC Healthcare shares. The cash portion will be funded by internal resources, the group said in a bourse filing on Thursday (Apr 7). ISEC Healthcare is also looking to subscribe for shares in 3 Malaysia specialist eye clinics located in Manjung, Teluk Intan and Taiping. These clinics have yet to conduct any business as they have applied for but not obtained the licence to operate or provide a private healthcare facility or service as per the Private Healthcare Facilities and Services Act 1998 of Malaysia. ISEC Healthcare expects IE Centre and Kampar Eye to provide the group with a growing stream of recurring income and cash flow in Malaysia where the demand for specialised and quality medical eye-care services is expected to increase.

Management consulting company Zico Holdings said in a bourse filing on Thursday (Apr 7) that its indirect subsidiary Zico Trust has been served with a writ of summons on Apr 4. The writ, filed by CPS German 1 on Mar 31, claimed that the trust company had received funds amounting to US$5 million and S$720,000 in 2 accounts and is liable to return them. In addition to this sum, CPS German 1 also claimed damages worth US$1 million and S$144,000, from Zico Trust, as well as 3 other defendants that were also named in the writ. They are Seed Global Investment, Tew See Mong and Lim Soon Cheng. Tew is the chief executive officer of Seed Global Investment, an investment consultancy firm.

Tencent is shutting down its video game streaming platform months after Beijing shut down a huge merger that would have made the Chinese internet giant a major player in the area. The service Penguin Esports will shut down from June 7, Tencent said, citing a change of business strategy. Like Amazon’s Twitch, Tencent’s Penguin Esports hosts livestreams of professional gaming tournaments and other video game-related content. Tencent is one of the world’s largest online gaming players and is aggressively pushing into the area of professional gaming, also known as e-sports, for a potential new revenue stream.

Uber is driving ahead with its plan to become a travel “superapp”. The San Francisco-headquartered firm announced Wednesday that it is adding trains, buses, planes and car rentals to its U.K. app this year. The move is part of a pilot that could be expanded to other countries at a later date if it goes well. While Uber won’t provide these travel services itself, it will allow users to book them through its app following software integrations with platforms that sell tickets. The tech giant, which may take a cut on each booking, said it plans to announce various partners in the coming months. Uber said the integrations will help to boost app usage among its users in the U.K, who also have the choice of using apps like Bolt and Free Now. The U.K. is one of Uber’s largest markets outside the U.S.

Shell has announced that it will write off between $4 and $5 billion in the value of its assets after pulling out of Russia following the country’s unprecedented invasion of Ukraine. Thursday’s announcement offers a first glimpse at the potential financial impact to Western oil majors of exiting Russia. “For the first quarter 2022 results, the post-tax impact from impairment of non-current assets and additional charges (e.g. write-downs of receivable, expected credit losses, and onerous contracts) relating to Russia activities are expected to be $4 to $5 billion,” Shell said in a statement Thursday. “These charges are expected to be identified and therefore will not impact Adjusted Earnings.”

Walmart said Thursday that it is raising pay for long-haul truck drivers and launching a new program to train the next generation, as it seeks the staffing it relies on to replenish store shelves and warehouses across the country. The retailer said truck drivers will now make up to $110,000 in their first year with Walmart, which the company said will raise their average pay. The company did not provide the current salary range for a new truck driver at Walmart, but said they have made an average of $87,500 in their first year. Walmart has also started a 12-week program in Sanger, Texas and in Dover, Delaware, where people can earn a commercial driver’s license and join Walmart’s fleet. It will cover the cost of earning a license, which can run between $4,000 to $5,000, said company spokeswoman Anne Hatfield.

Chase is partnering with EVgo to pilot electric vehicle charging stations at select branches across the country, the company announced Thursday. The move is part of the bank’s push to promote sustainability and reduce its carbon footprint. The company said it’s aiming to have EV chargers installed at 50 branches across the country by summer 2023. Construction on the first location in Carmel, Indiana, has already begun, and will open this summer. Locations will have between two and six DC fast chargers, with most having four. The chargers will not be reserved for Chase customers. The aim is to also have the general public use the charging stations. Chase has just over 4,700 locations across the lower 48 states, so the 50 selected branches represent a small portion of the bank’s overall footprint.

The labor market tightened further last week, with initial jobless claims falling to their lowest level in more than 53 years, the Labor Department reported Thursday. Initial filings for unemployment dropped to 166,000, well below the Dow Jones estimate of 200,000 and 5,000 under the previous week’s total, which was revised sharply lower. The department noted that it revised claims from 2017 to 2021 and changed the seasonal factors it is using to calculate the numbers. Last week’s total was the lowest since November 1968. The numbers nevertheless reflect a jobs market that is subject to a severe worker shortage. There are about 5 million more employment openings than there are available workers, a situation that has driven up wages and contributed to spiraling inflation.