Welcome to our Daily Morning Note from our Research team!

Asian stocks look set for a mixed open Tuesday after another late dip in U.S. shares as investors weigh the potential impact of tightening monetary policy on the economic outlook. Futures for Japan were little changed, while Australia’s slipped and those for Hong Kong rose. Wall Street shares reversed gains in the last hour of trading, dragged down by technology stocks such as Meta Platforms Inc. Volumes on U.S. exchanges were among the lowest of the year. Longer maturity Treasuries fell, extending a global bond selloff on the prospect of interest-rate hikes to fight inflation. The dollar slipped against key peers. Oil’s scorching rally took a breather. In cryptocurrencies, Bitcoin held gains and was trading around $44,000. 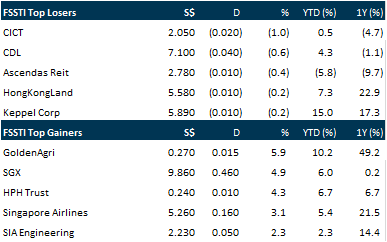 As penalty for the widespread disruption of its digital banking services in November last year, DBS now has to set aside about S$930 million in additional regulatory capital to guard against operational risks. The Monetary Authority of Singapore (MAS) announced on Monday (Feb 7) that it has imposed an additional capital requirement on South-east Asia’s largest bank, by requiring DBS to apply a multiplier of 1.5 times to its risk-weighted assets for operational risk.

A unit of troubled liftboat operator Ezion Holdings has entered into a 24-month bareboat charter, with an obligation to purchase (BBC), to dispose of a vessel to buyer April Pearl. April Pearl – a subsidiary of JUB Pacific – will eventually purchase the liftboat, Teras Conquest 1, for a minimum consideration of US$11.35 million and a maximum consideration of US$11.5 million, minus the deposit, monthly payments and any amounts payable and paid by April Pearl.

The Covid-19 pandemic has dented Frasers Logistics & Commercial Trust‘s distributable income by about S$0.2 million for Q1 2022, but this has not been material to the real estate investment trust (Reit), said its manager in a business update on Monday (Feb 7). The figure comprises mainly rental waivers and allowance for doubtful receivables attributable to the pandemic.

Hotel Grand Central (HGC) has reached an agreement to sell an office building in Melbourne for A$80.8 million (S$77.1 million), it said on Monday (Feb 7). The property was purchased in 2013, with a 7-year lease to the then-vendor, Victoria University, for A$51.45 million (including stamp duty). Victoria University occupies the entire property as tenant and currently pays a rent of about A$5.36 million per year, plus outgoings. The tenancy, which was extended, expires in October 2022.

Mainboard-listed trading company Intraco has agreed to acquire a 51 per cent stake worth about S$47.2 million in digital asset platform MHC Singapore, the company said in a bourse filing on Monday (Feb 7). This comes after the companies entered into a binding heads of agreement (HOA) on Dec 13, 2021, which was revised in a second binding HOA on Dec 22, 2021.

Tyson Foods Inc said it is expanding efforts to boost productivity as a tight labour market and smaller livestock herds prompt the biggest US meat company to raise prices for consumers. Tyson is targeting US$1 billion in productivity savings by the end of fiscal 2024 and US$300 million to US$400 million in fiscal 2022, relative to a fiscal 2021 cost baseline, said a statement Monday.

Alibaba Group Holding registered 1 billion American depositary shares (ADSs) that hadn’t been registered before, suggesting SoftBank Group may intend to sell some of its shares. Japan’s SoftBank backed Alibaba before its initial public offering so a large portion of its holdings in the company is not registered as ADSs, Citigroup analysts including Alicia Yap wrote in a note. SoftBank owns 5.39 billion ordinary shares of Alibaba, equivalent to 673.76 million ADSs, or a 24.8 per cent stake, according to Citi’s calculations.

Swedish price comparison firm PriceRunner said on Monday (Feb 7) it was suing Alphabet-owned Google for about 2.1 billion euros (S$3.23 billion), the latest firm to take legal action alleging the search giant manipulated search results. Google in November lost an appeal against a 2.42 billion-euro fine it received in 2017 which found using its own price comparison shopping service gave the company an unfair advantage over smaller European rivals.

Join our Phillip Securities Research Telegram channel for the latest update on our stock coverage!

Webinar Of The Week

For more on Market Outlook

For more videos on Phillip in 3 Mins