Singapore shares made gains on Thursday (Jul 7), mirroring a rally in regional markets as lower oil prices provided some relief to investors. The Straits Times Index (STI) closed 0.8 per cent or 25.74 points higher at 3,129.40. Across the broader Singapore market, gainers outnumbered losers 249 to 201, after 1.2 billion securities worth S$944.3 million were traded. Wilmar International led gainers on the STI, climbing 3.2 per cent to close at S$4.14. Other top performers include DFI Retail Group and Jardine Matheson Holdings, which were both up 2.4 per cent. Just 2 STI counters ended the day in the red, including Hongkong Land, which slipped 0.4 per cent to US$4.94. Yangzijiang Shipbuilding – which announced on Wednesday that it clinched an order for 4 containerships – ended at the bottom of the index performance table, falling 1.6 per cent to close at S$0.915.

Wall Street stocks finished solidly higher on Thursday, extending a positive stretch that has cut into the market’s losses thus far in 2022. Equities were in positive territory the entire session, a rarely upbeat day in a year in which stocks have been dogged by worries over inflation and tightening monetary policy. The Dow Jones Industrial Average climbed 1.1 per cent to 31,384.15. The broad-based S&P 500 rose 1.5 per cent to 3,902.47, while the tech-rich Nasdaq Composite Index jumped 2.3 per cent to 11,621.35. 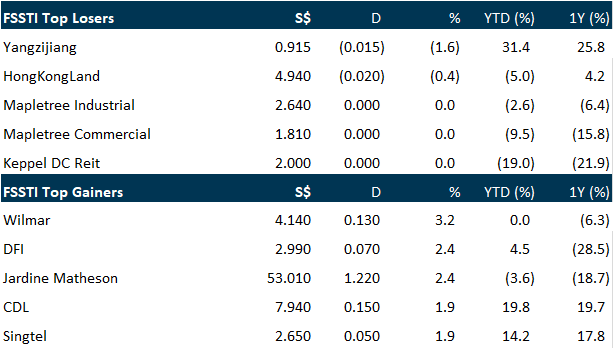 Cromewell European Real Estate Investment Trust (Cromwell E-Reit) is continuing its pivot to the light industrial and logistics sector with the divestment of its largest office asset in Finland and the acquisition of its third logistics property in the UK. The manager on Thursday (Jul 7) announced the divestment of its Kiinteistö Oy Opus 1 office asset in Herttoniemi, Helsinki, Finland for 16.2 million euros (S$23.2 million). The buyer of the asset is real estate corporation Julius Tallberg-Kiinteistöt Oyj. The divestment was made at a 20 per cent premium to its 2018 purchase price of 13.5 million euros, and a 6.4 per cent premium to its latest valuation of 15.2 million euros as at Dec 31, 2021, the manager noted. Simultaneously, Cromwell E-Reit has acquired its third logistics asset in the UK for £18.9 million (S$31.6 million) from a third-party vendor. The asset is fully leased to Kammac, a UK-focused third-party logistics company, on a 10-year triple net lease. It has a gross lettable area of 14,120 sq m, which consists of a 7,733 sq m high-bay warehouse, a 5,184 sq m normal 9-metre height-bay warehouse and 1,203 sq m in office and other ancillary areas. The total cost of acquisition is around £20.3 million, which includes the purchase consideration, acquisition fee payable to Cromwell E-Reit’s manager, as well as fees and expenses related to the deal. The transaction was funded through a combination of Cromwell E-Reit’s existing cash balances and drawing down from a revolving credit facility. This brings the Reit’s pro-forma net gearing as at May 31 to below 38 per cent, the manager added.

THC Venture announced in a bourse filing on Thursday (Jul 7) that it has extended the closing date of its privatisation offer for TTJ Holdings from Jul 8 to Jul 22. As at Thursday 6 pm, the company had received valid acceptances from shareholders holding about 4.2 per cent of the shares. Together with its concert parties, the total number of shares owned, controlled or agreed to be acquired by the offeror and its concert parties stood at about 88.7 per cent. THC Venture is an investment holding company held solely by Teo Hock Chwee, the executive chairman of TTJ. He held about 84.4 per cent of TTJ’s shares and offered S$0.23 in cash per share to take the structural steel specialist private in May this year. The news comes after 4 TTJ directors spoke out against the deal on Jun 24 after the independent financial adviser, Zico Capital, said the deal was “not fair and not reasonable”. It noted that the offer price was below the estimated share price value of between S$0.37 and S$0.46. On Jun 29, THC Venture said that it does not intend to raise the offer price. TTJ shares closed flat at S$0.225 on Thursday, before the announcement was made.

SPH Reit posted a 5.1 per cent increase in distribution per unit to 1.45 Singapore cents for the third quarter ended May 31, 2022, from 1.38 Singapore cents a year ago. This gives it an annualised distribution yield of 5.8 per cent. In its business update released on Jul 7, the real estate investment trust’s (Reit’s) manager noted that year-to-date third quarter gross revenue rose 0.9 per cent year-on-year to S$211.6 million. It attributed this to high Covid-19 vaccination rates and the easing of safe distancing measures that helped to stabilise portfolio performance. The distribution will be paid on Aug 29, after the record date on Jul 18. The Reit manager added that year-to-date third quarter FY2022 sales at its properties in Singapore and Australia properties rose by approximately 12 per cent and 2 per cent year-on-year respectively. SPH Reit’s occupancy rate stands at 97.6 per cent as at May 31. Meanwhile, its weighted average lease expiry (WALE) by net lettable area stood at 5.4 years and its WALE by gross rental income stood at 2.9 years. Units of SPH Reit rose 2.3 per cent or S$0.02 to close at S$0.905 on Thursday (Jul 7), before the business update was released.

Bank of America (BofA) said customer spending continues to show signs of resilience despite surging inflation, with pent-up demand for travel and leisure countering rising petrol prices and other increased costs. Spending on credit and debit cards was up 11 per cent from a year earlier in June, compared with a 13 per cent increase in April and 9 per cent gain in May, the bank said on Thursday (Jul 7). The higher spending comes amid rising prices and fears that the US is poised to slide into recession. Financial giants have been reporting signs of consumer strength even amid soaring inflation, which accelerated to a new 40-year high in May, and rising interest rates. The largest US banks saw spending on credit cards surge in the first 3 months of the year as customers began travelling and dining out again following Covid-19 lockdowns. While overall spending has remained strong among Bank of America customers, growth has slowed on a per-household basis, climbing 3.3 per cent in the 28 days till Jun 30 from the year-earlier period. Some of the slowdown may be the result of a pullback from previous pent-up demand for vacations, the Charlotte, North Carolina-based company said. For lower-income households, Bank of America saw total card spending excluding petrol and groceries contract 1 per cent. Among higher-income households, such spending “remained positive but is on a downward trend”, the company said.

Binance.US, the US partner of the world’s largest cryptocurrency exchange, named former PayPal Holdings executive Jasmine Lee as its chief financial officer on Thursday (Jul 7). Lee most recently served as the CFO and chief operating officer of investing application Acorns. Before that, she spent 8 years at PayPal in top executive roles. Her appointment comes at a time when investors have been dumping digital assets on fears that aggressive interest rate hikes from global central banks would spark an economic slowdown. The crypto industry has also been in the crosshairs of regulators who worry that the meltdown in the volatile market could hit the broader financial sector. That has prompted a push for more rules on the largely unregulated industry. Lee replaces interim CFO Eric Segal, who had held the role since October and has now left the company, the Wall Street Journal reported, citing a company spokesman. Launched in 2019, Binance.US had fetched a pre-money valuation of US$4.5 billion in April when it raised US$200 million in a funding round. Last year, the company’s former chief executive Brian Brooks resigned just 3 months after taking up the role.

Mortgage rates in the US posted the biggest 1-week decline since 2008. The average for a 30-year loan fell to 5.3 per cent, the lowest in a month and down from 5.7 per cent last week, Freddie Mac said in a statement on Thursday (Jul 7). Buyers are getting a slight reprieve from this year’s massive rise in rates that has started to cool parts of the US housing market. The jump in costs has pushed more buyers out of the real estate hunt, causing inventory to increase. Sellers have started to cut prices in certain areas. “While the drop provides minor relief to buyers, the housing market will continue to normalise if home-price growth materially slows due to the combination of low housing affordability and an expected economic slowdown,” said Sam Khater, Freddie Mac’s chief economist. Even as price gains start to decelerate slightly, the market is the least affordable since the mid-1980s, numbers from mortgage data provider Black Knight showed. At the current 30-year average, a borrower with a US$300,000 mortgage would pay roughly US$1,665 a month, about US$383 more than at the end of last year, when rates hovered around 3.11 per cent.