Welcome to our Daily Morning Note from our Research team!

Stocks in Asia may get a boost Wednesday after broad-based gains on Wall Street on expectations economic growth will withstand higher interest rates. Treasuries extended declines. Futures rose in Japan, Australia and Hong Kong. The S&P 500 closed near session highs amid gains in financials and materials sectors. Dip-buying in some big tech names like Apple Inc. and Microsoft Corp. helped lift the Nasdaq 100. The Russell 2000 of small-caps outperformed. The 10-year Treasury yield climbed toward levels last seen in 2019 as the Federal Reserve gears up to raise rates to combat inflation. The dollar edged higher against a basket of peers. China’s stocks will be in focus. Chinese state-backed funds intervened in the stock market on Tuesday, helping the benchmark index stage a strong recovery from its biggest intraday drop since August 2021. The Nasdaq Golden Dragon China Index jumped the most in a week. 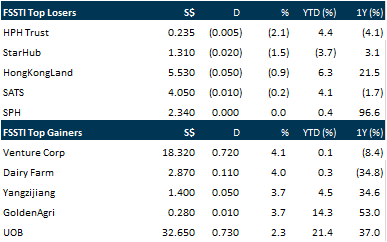 The revised scheme consideration for ESR Reit’s offer for ARA Logos Logistics Trust (ALog) was determined by various factors such as the merger’s commercial appeal, the quality of ALog’s portfolio and the strong conviction that a merger is the best way forward for both, ALog’s manager has said. In a filing to the Singapore Exchange which highlighted the manager’s response to unitholders’ frequently asked questions, ALog’s manager emphasised that the “proposed transaction is intended as a merger and not a complete sell-out of ALog and/or its underlying assets”.

Mermaid Maritime’s subsidiary, Mermaid Subsea Services (International) (MSSI), has entered into a two year charter-in contract for a DP2 diving support construction vessel (DSCV), of which it has already taken delivery. In a filing to the Singapore Exchange on Tuesday, Mermaid Maritime said MSSI will deploy the DSCV Van Gogh to support its various subsea projects, starting this month. The contract also comes with two one-year extension options, which, if exercised, would extend the charter period through to February 2026.

The manager of Ascendas Reit is planning to deepen its presence in the US and Europe markets as the real estate investment trust (Reit) continues to seek growth. But chief executive of the Reit manager William Tay believes it is “tough” to exceed the pace of acquisitions completed in FY2021. Ascendas Reit completed S$2.12 billion worth of acquisitions and developments in FY2021, including the purchase of 11 data centres in Europe and 11 logistics properties in the US.

Chinese property developer Yanlord Land Group logged 9.81 billion yuan (S$2.07 billion) in total contracted pre-sales from residential and commercial units, as well as car parks in January 2022, up 87.7 per cent from the 5.22 billion yuan it recorded a year ago. The pre-sales were for a contracted gross floor area (GFA) of 170,486 square metres, a 6.7 per cent increase from January 2021, according to the group’s unaudited key operating figures filed on Tuesday (Feb 8).

Thomson Reuters on Tuesday ( Feb 8) reported higher revenue in the fourth quarter and raised its dividend and sales forecast, but said operating profit was down from a year ago, when it saw a significant gain from an investment sale and other items. The news and data provider and parent company of Reuters News said fourth-quarter operating profit fell 73 per cent year on year to US$257 million. Adjusted earnings per share, which exclude one-time items, fell to 43 US cents per share from 54 US cents.

Pfizer’s forecast for full-year sales of its Covid-19 vaccine and antiviral pill fell short of lofty Wall Street estimates on Tuesday, sending the drugmaker’s shares down 4 per cent before the bell. Pfizer said it expects to post US$54 billion in combined sales of both the products this year, with Covid-19 vaccine sales coming in at US$32 billion and sales from Paxlovid, its oral antiviral to treat the disease, at US$22 billion.

The US Commerce Department said on Monday it had added 33 Chinese entities to its so-called ‘unverified list’, which requires US exporters to go through more procedures before shipping goods to the entities. WuXi Biologics saw its stock plummet more than 25 per cent on Tuesday to wipe US$9.9 billion off its market value following the addition of its units in Wuxi and Shanghai to the list. Trade in its shares was later halted.

Boeing said on Tuesday (Feb 8) it delivered 32 aircraft in January, the lowest in three months, as its sidelined 787 Dreamliner programme continued to weigh on the planemaker’s ability to capitalise on a recovery in air travel. The company handed over 27 737 MAX jets in January and three widebody aircraft, including a 777 freighter, Boeing said in its closely watched monthly report.

• FY21 results were in line with revenue and PATMI at 99% and 102% of our FY21 forecasts respectively, excluding a pre-tax valuation gain of US$11.8bn from the initial public offering (IPO) of Rivian.
• Amazon Web Services (AWS) 4Q21 revenue growth accelerated to 40% YoY, above consensus of 35% and our FY21 forecast of 33%. AWS is Amazon’s key growth driver, contributing 75% of FY21 operating income.
• New Amazon Prime membership price increases of 17% in 1Q22 should largely translate to bottom line and add about 10% to FY22e profit before taxes.
• The challenge from the tight US labour market is easing. However, guidance for net sales for 1Q22 was 3-6% weaker than consensus, signalling moderating demand. Amazon’s fulfilment network is no longer running at 100% capacity. As a result, we cut FY22e revenue by 3% and reduce operating margins from 8% to 6% due to still elevated wage and fulfilment costs, which lowers our FY22e PATMI by 31%. The swing factor is in margins from easing supply constraints. Maintain BUY with a lower target price of US$4079.00 based on DCF with a WACC of 6.2% and terminal growth of 5.0%.

Join our Phillip Securities Research Telegram channel for the latest update on our stock coverage!

Webinar Of The Week

For more on Market Outlook

For more videos on Phillip in 3 Mins