President Joe Biden said the U.S. will ban imports of Russian fossil fuels including oil, a major escalation of global efforts to hobble Russia’s economy in retaliation for its attack on Ukraine. The U.S. move will be matched in part by the U.K., which announced a ban on Russian oil imports, though it will continue to allow natural gas and coal from the country. “The U.S. is targeting the main artery of Russia’s economy,” Biden said Tuesday in Washington. “We will not be part of subsidizing Putin’s war.” The escalation in sanctions comes as the United Nations reported that close to 500 civilians have been confirmed killed by Russian attacks across Ukraine, including dozens of children, though it added the actual number is likely much higher.

US stocks lost more ground on Tuesday after President Joe Biden imposed a ban on imports of Russian petroleum, and more major firms announced they were shutting operations in Russia. Britain also announced it was phasing out energy purchases from Russia after the invasion of Ukraine, while oil giants Shell and BP, both based in Britain, said they would stop buying Russian oil and natural gas immediately. The latest steps sent oil prices up another 4.6 per cent, with Brent futures rising to US$128.77 a barrel. The broad-based S&P 500 dropped 0.7 per cent to end at 4,170.7, while the tech-rich Nasdaq Composite lost 0.3 per cent to 12,795.55. 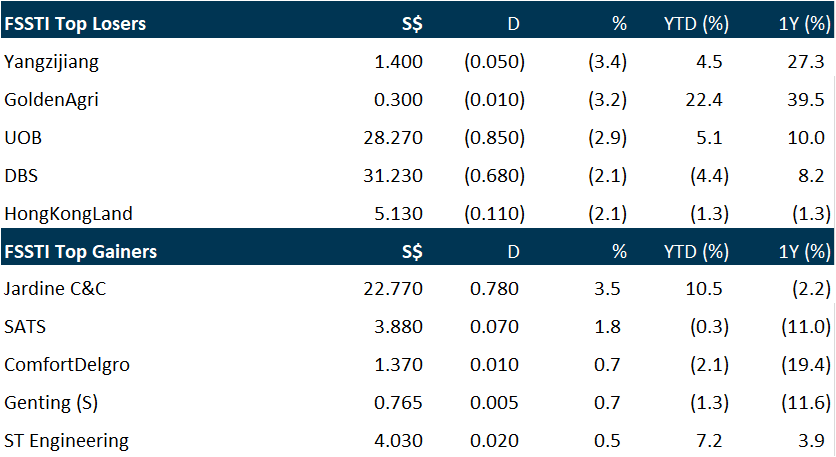 Singapore new home sales sink 27% in February. NEW home sales sank in February in the absence of major new launches. Chinese New Year festivities and the declining inventory of unsold new homes also dampened sales during the month, analysts said. “Some developers were holding back their new project launches until the current wave of Omicron Covid-19 infections has subsided,” said Nicholas Mak, head of research and consultancy at ERA Singapore. PropNex Realty head of research and content Wong Siew Ying added that as at the end of Q4 2021, the unsold inventory in the rest of central region (RCR) and outside of central region (OCR) were both at record lows of 4,306 and 3,972 units respectively. Based on caveats lodged, developers sold 490 new private homes last month, a 27.2 per cent drop from January’s 673 units.

Proxy advisers give cautious nod for ARA Logos Logistics Trust (ALog Trust) unitholders to accept merger offer. Proxy advisory firms Institutional Shareholder Services (ISS) and Glass Lewis have recommended that unitholders of ALog Trust vote in favour of the merger with ESR-Reit, based on the revised terms of the offer. Both ISS and Glass Lewis had in January recommended that unitholders vote against the merger on grounds that the process had been “questionable” and that the offer price was unfair to ALog Trust unitholders.

Malaysia’s Top Glove has postponed its plan to raise US$347 million via a Hong Kong listing as Russia’s invasion of Ukraine weighs on investor sentiment and heightens markets volatility, according to a person with direct knowledge of the matter. The company, which benefited from demand for disposable gloves during the Covid-19 pandemic, has a primary listing in Kuala Lumpur and a secondary listing in Singapore, and had planned the Hong Kong listing to broaden its investor base. The source could not be named as the information has not yet been made public. The rubber glove producer had initially aimed to raise US$1 billion in the Hong Kong listing, which would have been a dual primary, but has scaled down the size of the deal over the past year. Top Glove received shareholder approval in December to issue up to 793.5 million new shares which at the current price of RM1.83 would have raised about US$347 million.

S$63 million to enhance Green Mark Incentive Scheme for Existing Buildings. The Green Mark Incentive Scheme for Existing Buildings will be enhanced to the tune of S$63 million, although applicants will now need to meet higher standards to qualify, Minister for National Development Desmond Lee said at his ministry’s Committee of Supply Debate on Tuesday (Mar 8). The grants under the scheme help building owners undertake retrofits, and achieve higher standards of energy efficiency and sustainability, said Lee. These include changes such as upgrading the cooling system, installing solar panels, or redesigning spaces for natural ventilation. Under the enhanced scheme, the minimum qualifying standard will be raised to Green Mark Platinum, from the previous Green Mark Gold. For example, a project that achieves Zero Energy certification can receive up to S$1.2 million under the enhanced scheme.

US trade deficit hits new record in January as exports fall. A jump in oil and auto imports in January combined with a sharp drop in exports caused the US trade gap to widen again in January, according to official data released Tuesday. The trade deficit in the world’s largest economy increased by 9.4 per cent compared with December to a record US$89.7 billion, the Commerce Department reported. Exports fell 1.7 per cent to US$224.4 billion while imports rose to US$314.1 billion, the report said. US firms have been trying to replenish depleted inventories and bring in parts and materials that have proved hard to find due to the pandemic disruptions that have snarled global supply chains.

A bipartisan group of more than 140 U.S. lawmakers on Tuesday urged leaders in Congress to approve $52 billion in government subsidies for semiconductor chips production and research. The U.S. House of Representatives on Feb. 4 narrowly passed a bill aimed at increasing American competitiveness with China in part by allocating $52 billion to boost U.S. semiconductor manufacturing. The funding will “help prevent future shortages that cause GDP drag, job losses, more expensive consumer goods, and national security vulnerabilities,” said a letter signed by lawmakers, including Representative Doris Matsui and Senator Mark Warner, both Democrats, and Republican Representative Michael McCaul and Senator John Cornyn.

Google on Tuesday announced it has agreed to buy cybersecurity firm Mandiant for around $5.4 billion, one of the largest acquisitions in the tech giant’s history and a big bet that helping companies better address cyber threats can bolster its cloud computing business. “The acquisition of Mandiant will complement Google Cloud’s existing strengths in security,” Google and Mandiant said in a joint statement Tuesday. “Combined with Google Cloud’s cloud-native security offerings, the acquisition will help enterprises globally stay protected at every stage of the security lifecycle.” Microsoft was also rumored to be looking to acquire Mandiant, a firm that focuses on threat intelligence, incident response and cybersecurity testing. Mandiant has been credited with uncovering the Solar Winds hack, a devastating breach that impacted a number of federal agencies and private businesses.

Uber drivers are protesting on social media over record U.S. gasoline prices eating into their earnings just as the ride-hailing firm raised its profitability outlook, with some asking whether it was still worth getting behind the wheel. U.S. retail gasoline prices hit an all-time of $4.173 on Tuesday after Russia’s invasion of Ukraine sent the price of crude oil rocketing. The price per gallon is now around 60% higher than it was two years ago before the COVID-19 crisis. For Uber (UBER.N) and Lyft (LYFT.O), driver discontent comes as the ride-hailing pioneers seek to turn the page on the coronavirus pandemic as customers return to in greater numbers. “Our platform only works if it works for drivers, so we’ll continue to monitor gas prices and listen to drivers over the coming weeks,” Uber said in a statement.

Better.com, the embattled online mortgage company, announced Tuesday that it’s taking the “difficult step of streamlining” its operations and laying off about one-third of its workforce, amounting to roughly 3,000 jobs. The company, which gained notoriety last year after its CEO fired 900 employees over Zoom just before Christmas, expanded rapidly during the pandemic when interest rates were low. However, in a letter posted on Better’s website, the company said Tuesday’s layoffs were prompted by a “dramatic drop in origination volume due to rising interest rates,” said Interim President Kevin Ryan. Unfortunately, that means we must take the difficult step of streamlining our operations further and reducing our workforce in both the US and India in a substantial way,” Ryan wrote. “This decision is driven heavily by the headwinds affecting the residential real estate market,” he added. Mortgage rates recently jumped again, rising to a level not seen since the summer of 2019. The 30-year fixed-rate mortgage averaged 3.92% in the week ending February 17, up from 3.69% the prior week, according to Freddie Mac. Rates are increasing because of high inflation and stronger than expected consumer spending.