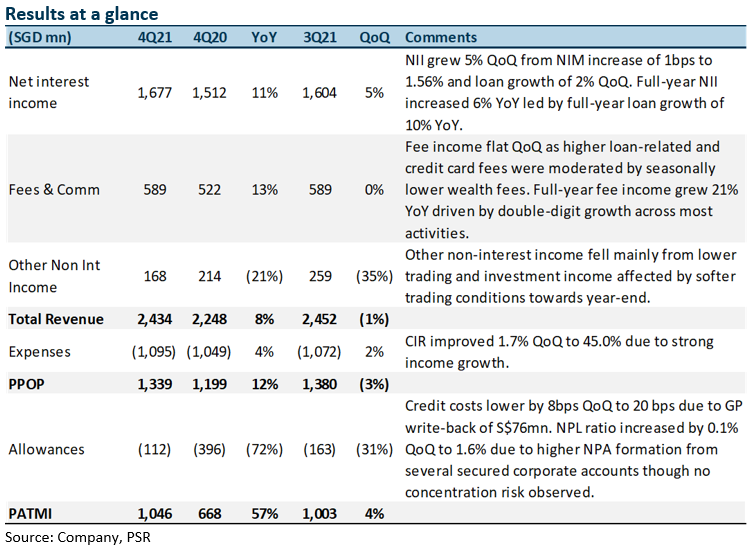 + GP write-back of S$76mn in 4Q21. GP write-back of S$76mn resulted in full-year GPs reducing by 90% YoY to S$95mn. Total allowances were at S$94mn in 4Q21 vs S$153mn in 3Q21. Credit costs on allowances dropped by 8bps QoQ to 12bps. Full-year credit costs were lower by 37bps at 20bps as FY20 included pre-emptive allowance for non-impaired loans. Total general allowance for loans, including RLARs, were prudently maintained at 1% of performing loans. UOB has guided credit cost of 20-25bps for FY22e due to lower SPs.

– Loans under moratorium remain unchanged. We believe these belonged to weaker corporates which still require loan relief. As the moratoriums begin to expire, we could see an uptick in NPLs in 2022. Management has mentioned that the loan moratoriums in Singapore have reduced to a negligible amount with the highest amount in Malaysia as the Malaysian government had extended the relief period until early 2022.

– New NPAs of S$670k in 4Q21. New NPA formation increased by 167% QoQ to S$670k mainly from several secured corporate accounts though no concentration risk was observed. Management has mentioned that they are confident that NPAs will be recovered as more than half are in Singapore and belong to one particular asset with the LTV below 50%. NPL ratio increased by 0.1% QoQ to 1.6%.

PATMI: UOB’s profit should continue to grow in 2022 on the back of stabilising margins, stronger fees and lower provisions. We expect NII to expand 14% YoY. We continue to expect credit costs to come in below guidance of 20-25bps. There is earnings upside from writebacks of the S$1bn in management overlay of general provisions. Management has mentioned that as it is being conservative, the intention is only to write-back some but not all of the GPs during the second half of 2022. Full-year NPA coverage is at 96% and unsecured NPA coverage at 239%, compared with DBS’ NPA coverage of 116% and unsecured NPA coverage of 214% for the same period.

NIMs: Management expects improvement in NIMs only in the later part of 2022. UOB mentioned that a 25bps rise in interest rates could raise NII by $150mn-200mn (or NIM sensitivity of 4bps for every 25bps rate hike). Assuming rate hikes totalling 100bps this year, our FY22e NII can climb S$800mn (or 11%) resulting in an increase in our FY22e PATMI by 17%.

Loan growth: Asset quality is expected to stabilise, and management expects to continue to see strong demand for loans as cross border activities pick up. ASEAN loans growth is expected to be higher with some slowdown in Singapore and North Asia. Growth so far has been skewed towards the developed markets as the ASEAN economy remains muted, but management expects this to change in 2022 as the economy recovers. UOB has guided mid to high single-digit loan growth for FY22e. 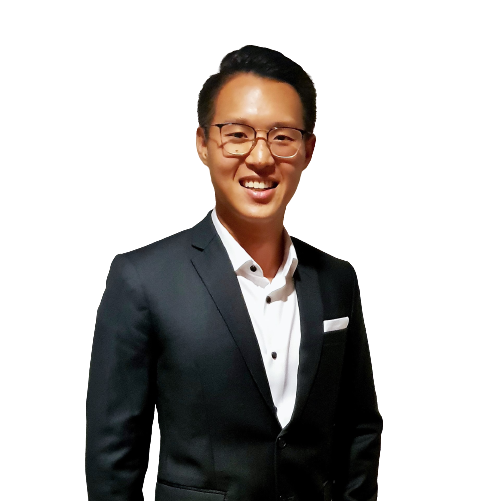 Glenn covers the Banking and Finance sector. He has had 3 years of experience as a Credit Analyst in a Bank, where he prepared credit proposals by conducting consistent critical analysis on the business, market, country and financial information. Glenn graduated with a Bachelor of Business Management from the University of Queensland with a double major in International Business and Human Resources.

Glenn covers the Banking and Finance sector. He has had 3 years of experience as a Credit Analyst in a Bank, where he prepared credit proposals by conducting consistent critical analysis on the business, market, country and financial information. Glenn graduated with a Bachelor of Business Management from the University of Queensland with a double major in International Business and Human Resources.