The Singapore market couldn’t decide which way to go on Thursday (Jun 16), as with the key bourses in the Asia-Pacific, which finished divided after the United States central bank raised its policy rate by 0.75 per cent overnight. The key gauge Straits Times Index (STI) opened 1.1 per cent higher, but the steam fizzled out by mid-afternoon. The barometer closed 8.42 points or 0.27 per cent lower at 3,097.43.

US equities dropped sharply Thursday (Jun 16), a day after the Federal Reserve made an aggressive move to bring down inflation and instill confidence in the markets and other central banks followed. The Dow Jones Industrial Average lost 741.5 points, ending down 2.4 per cent at 29,927.07 – its first close below 30,000 since January 2021. The broad-based S&P 500, which entered a “bear market” earlier this week following the latest red-hot US inflation data, fell 3.3 per cent to 3,666.78 at the closing bell. Meanwhile, the tech-rich Nasdaq Composite Index fell 4.1 per cent to 10,646.10. 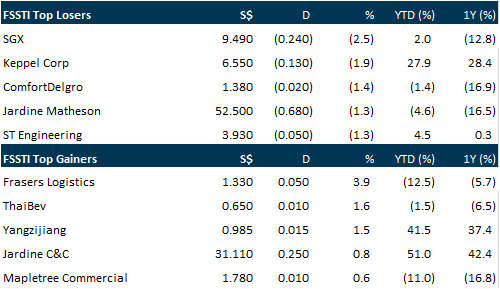 mm2 Asia has raised S$54 million to refinance existing debt, as the media content provider gears up for the recovery from the COVID-19 pandemic. The company plans to issue an exchangeable bond with a two-year and a 5% annual interest rate. The bonds will be exchangeable for mm Connect shares, the company that owns mm2 Asia’s cinema operations in Malaysia and Singapore. The bond also comes with 250 million detachable warrants. Each warrant carries the right for a period of 5 years from the date of issuance to subscribe for one new ordinary share at the exercise price of 6.5 cents per new share. Mm2 Asia closed 3.3 per cent lower at S$0.058 on Thursday.

Embattled beauty products distributor Best World International on Friday (Jun 17) announced the results of equal access share buyback offer. The company said that the equal access offer received a positive response, with the total tendered shares significantly higher than the maximum buyback amount of 49 million shares. Best World International will make payment to successful accepting shareholders as per the settlement process outlined in the offer letter’s Appendix. The company announced in a filing on Apr 26 that it will buy back up to around 49 million shares, which accounts for approximately 10 per cent of its issued share capital, for S$1.36 each. This is the second time in recent months that the company is buying back its shares. It announced at the end of last year that it was looking to buy back up to 54.4 million shares, which represented 10 per cent of its issued share capital at that time for the same price. The counter has been suspended from trading after the regulatory arm of the Singapore Exchange, SGX RegCo, raised concerns over the legality of its business model in China.

Singtel on Thursday (Jun 16) proposed to raise its stake in Intouch Holdings to 24.99 per cent from 21.21 per cent by acquiring an additional 3.78 per cent stake from Temasek’s wholly-owned subsidiary Anderton Investments. Singtel will pay S$330 million in cash, which represents a 5 per cent discount to the volume-weighted average price for each Intouch share on the Stock Exchange of Thailand calculated for 20 trading days before the date of the share purchase agreement. The S$330 million consideration also represents about 2.04 per cent of Singtel and its subsidiaries’ latest audited consolidated net tangible assets as at Mar 31, 2022. Singtel plans to complete the transaction by the end of June 2022. The Singapore telco is 1 of the 2 largest shareholders of Intouch, which is the parent company of Advanced Info Services (AIS), a regional associate of Singtel and Thailand’s largest mobile phone network. The largest shareholder is Thai-listed power producer Gulf Energy. Singtel closed 0.8 per cent or S$0.02 lower at S$2.50 on Wednesday.

Meta, Alphabet unit Google, Twitter and Microsoft agreed on Thursday (Jun 16) to take a tougher line against disinformation under an updated EU code of practice that could hit them with hefty fines if they fail to do so. More than 30 signatories including advertising bodies have committed to the updated Code of Practice on disinformation, the European Commission said. The signatories agree to do more to tackle deep fakes, fake accounts and political advertising, while non-compliance can lead to fines as much as 6 per cent of a company’s global turnover, the EU executive said, confirming a Reuters report last week. The companies, which include TikTok and Amazon’s live streaming e-sports platform Twitch, have 6 months to comply with their pledges and will have to present a progress report at the beginning of 2023. “The new code is a testimony that Europe has learned its lessons and that we are not naive any longer,” Commission vice-president Vera Jourova told a news conference. She said Russia’s invasion of Ukraine, the Covid-19 pandemic and Britain’s withdrawal from the European Union accelerated the EU’s crackdown on fake news.

Oil prices rose on Thursday (Jun 16) in topsy-turvy trading after the United States announced new sanctions on Iran, and as energy markets stayed focused on supply concerns that have sent prices soaring this year. The market slipped earlier as interest rate hikes in the United States, Britain and Switzerland fed worries about global economic growth. Brent crude futures settled at US$119.81, up US$1.30, or 1.1 per cent, while West Texas Intermediate (WTI) crude futures ended up US$2.27, or 2 per cent, at US$117.58. After the early selloff, buyers jumped back into the market as most forecasters expect supply to remain tight for several months. The International Energy Agency said it expects demand to rise further in 2023, growing by more than 2 per cent to a record 101.6 million barrels per day. Optimism that China’s oil demand will rebound as it eases Covid-19 restrictions is also supporting prices.

Gold was flat on Thursday (Jun 16) after a jump in the previous session on falling Treasury yields and a weaker dollar, which were driven lower by a large but widely expected interest rate hike announcement from the US Federal Reserve. Spot gold was little changed at US$1,832.86 per ounce as of 12.34 am GMT. US gold futures rose 1 per cent to US$1,836.90. The Federal Reserve on Wednesday approved its largest interest rate increase in more than a quarter of a century to stem a surge in inflation that US central bank officials acknowledged may be eroding public trust in their power, and being driven by events seen increasingly out of their hands. Global stocks rallied and government bond yields and the dollar retreated from multi-year highs on Wednesday as investors cheered the Fed’s decision to raise interest rates by three-fourths of a percentage point. Higher short-term US interest rates increase the opportunity cost of holding bullion, which yields no interest. However, benchmark US 10-year Treasury yields weakened after the announcement, helping demand for greenback-priced gold along with a slide in the dollar, and took bullion prices as much as 1.9 per cent higher on the day.