Asian stocks look set for a steady open Wednesday as investors weigh cross-currents including a rally in U.S. shares, a surge in Treasury yields and lower oil prices.

Futures rose for Japan and Australia, while Hong Kong’s were steady. U.S. contracts fell following an after-hours Netflix Inc. slump on disappointing subscriber numbers, which tempered the optimism from the S&P 500 rally.

Investors are waiting to see whether loan prime rates fall in China. Measures to support the Covid-hit economy have so far failed to impress investors. The offshore yuan was around its weakest level in six months. 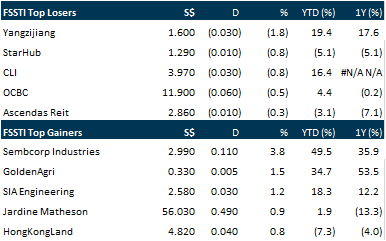 Mainboard-listed Nanofilm Technologies posted a 27 per cent increase in revenue year on year in the first quarter of 2022. In its business update released on Tuesday (Apr 19), the nanotechnology solutions provider noted that its advanced materials business unit contributed 81 per cent of revenue in the first quarter. The consumer electronics, communication and computers (3C) segment contributed 77.8 per cent of revenue within the unit. “Barring any potential logistics and production challenges arising from the Covid-19 situation in China, the 3C segment’s business pipeline visibility is strong, as the group enters into its typical peak season in the second half of the year,” the company said. Its nanofabrication business unit contributed 6 per cent of its revenue in the first quarter of the year. Mass production projects such as its micro-lens array project for wearables’ sensors and a Fresnel lens project led the unit.

LHN Logistics lodged its final offer document on Tuesday (Apr 19) as its parent company, property player LHN Group, looks to spin off and list its logistics arm. Through the initial public offering (IPO), LHN Logistics will raise approximately S$5 million through the listing of 25,238,000 placement shares at S$0.20 each. The net proceeds will amount to approximately S$3.6 million, after deducting the estimated listing expenses payable in cash by the company. S$3.2 million of the net proceeds will go towards the partial financing of the construction of the company’s ISO tank depot at 7 Gul Avenue, while the remainder will go towards the expansion of the company’s transportation fleet and acquisition of moving equipment.

Mainboard-listed telco Singtel said in a bourse filing on Tuesday (Apr 19) that its Australian subsidiary, Singapore Telecom Australia Investments (STAI) has filed an appeal to the Full Federal Court of Australia regarding an unfavourable judgement it had received earlier. The judgement relates to Singtel’s earlier failed appeal attempt against a tax assessment related to the acquisition financing of its Australian subsidiary, Singtel Optus, in 2001. In a business update on Feb 15, 2022, the company said that it would defer the payment of primary tax, interest and penalties until the due legal process is completed. In 2016 and 2017, STAI received amended assessments from the Australian Taxation Office amounting to A$393 million in primary tax, interest and penalties. While the final tax determination has yet to be set, Singtel has made provisions totalling S$316 million.

Investors are rapidly exiting stocks, with US equities seeing their biggest weekly outflows of the year as recession fears take hold. US equity funds had outflows of US$15.5 billion in the week through Apr 13, while European funds experienced a ninth straight week of outflows, Bank of America Corp strategists wrote, citing EPFR Global data. The bank’s private clients – with US$3.2 trillion of assets under management – also exited stocks in the largest amount since November. The outflows come as concerns about recession dominate markets, according to strategists led by Michael Hartnett. “Everyone fears it,” with food and energy prices surging, he wrote in a note.

The International Monetary Fund’s new chief economist said on Tuesday he is concerned about increasing signals that inflation expectations are on the rise and may become entrenched at elevated levels, prompting more aggressive monetary policy tightening in advanced economies. Pierre-Olivier Gourinchas, who started transitioning to the IMF’s economic counsellor role in January, told Reuters in an interview that the war in Ukraine, which is causing energy and food prices to spike, may damage expectations for decades-high inflation to start to subside this year. A “very, very tight labour market” in the United States is increasing demands for wage increases to “catch up” with higher prices that could help entrench inflationary expectations, the French-born former University of California-Berkeley economist said.

The International Monetary Fund on Tuesday slashed its forecast for global economic growth by nearly a full percentage point, citing Russia’s war in Ukraine, and warning that inflation was now a “clear and present danger” for many countries. The war is expected to slow growth and further increase inflation, the IMF said in its latest World Economic Outlook, while warning that its forecast was marked by “unusually high uncertainty.” Further sanctions on Russian energy and a widening of the war, a sharper-than-forecast deceleration in China and a renewed flare-up of the pandemic could further slow growth and boost inflation, while rising prices could trigger social unrest. The global lender, which downgraded its forecasts for the second time this year, said it now projects global growth of 3.6 per cent in 2022 and 2023, a drop of 0.8 and 0.2 percentage point from its January forecast, given the war’s direct impacts on Russia and Ukraine and global spillovers.

– Revenue expected to grow 2-Yr CAGR of 25%, riding on the growth of leading new economy clients like Facebook and Airbnb.
– Increased client count by 37% in FY21, with a Southeast Asian outsourced CX market that is expected to grow at a 13% CAGR until FY25e.
– Stable, cash generative, asset-light business model, for quicker scalability and flexibility
– Initiate coverage with a BUY recommendation and DCF-based target price (WACC 9.7%) of US$22.00.