The Straits Times Index (STI) lost 3.97 points or 0.1 per cent to close at 3,117.79 points on Tuesday (Jul 19), with mixed trading in Asia amid a Wall Street wobble. In the wider Singapore market, losers outnumbered gainers 284 to 182, with 735 million shares worth S$757.8 million changing hands. Elsewhere in Asia, Japan’s Nikkei 225 index ended up 0.7 per cent and the Jakarta Composite Index jumped 1.2 per cent, while Hong Kong’s Hang Seng Index shed 0.9 per cent, South Korea’s Kospi slipped 0.2 per cent, and the FTSE Bursa Malaysia KLCI dipped 0.1 per cent.

Wall Street stocks finished a buoyant session solidly higher on Tuesday on hopes of a good earnings season following the upbeat tone of the companies that have reported so far. The Dow Jones Industrial Average concluded the day at 31,827.05, up 2.4 per cent or more than 750 points. The broad-based S&P 500 gained 2.8 per cent to 3,936.69, while the tech-rich Nasdaq Composite Index jumped 3.1 per cent to 11,713.15. US housing data showed a two percent drop in new home construction projects started in June, while some of the large companies reporting results on Tuesday fell after their releases. But the tone from several of the companies reporting results has been better than feared, with executives describing consumers as still in good shape despite inflation. 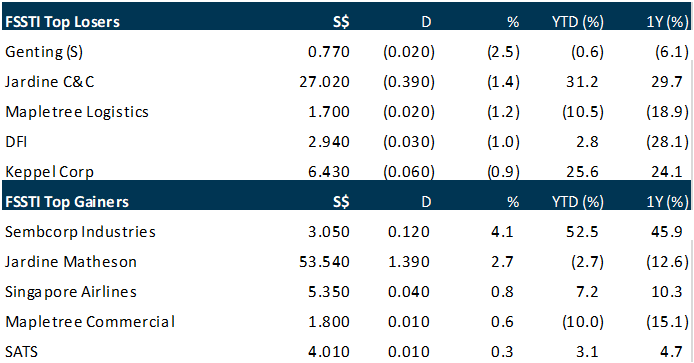 The Monetary Authority of Singapore (MAS) recorded a loss of S$7.4 billion for FY2021/22, which the regulator attributed to lower investment gains, a large negative foreign exchange translation effect, and higher interest expenses. As a result, MAS made no contribution to Singapore’s Consolidated Fund for the fiscal year. For comparison, MAS contributed S$1.07 billion to the fund in FY2020/21 and S$2.17 billion in FY2019/20. The Consolidated Fund is analogous to a bank account held by the government. Singapore’s revenues are paid into this fund and government expenditures are made out of it. MAS managing director Ravi Menon said on Tuesday (July 19), during the release of the regulator’s annual report, that the appreciation of the Singapore dollar led to a negative foreign translation effect of S$8.7 billion. In particular, the Singapore dollar strengthened 4 per cent against the pound, 5 per cent against the euro, and 9 per cent against the Japanese yen.

Mandarin Oriental International is selling its Washington DC hotel to London-headquartered private equity real estate manager Henderson Park, announced the hotelier on Tuesday (Jul 19). Following the sale completion scheduled for Sep 8, Mandarin Oriental, Washington DC will cease to be operated by the group. The transaction is expected to reap gross proceeds of about US$139 million and a post-tax, non-trading gain of US$45 million, which will be recognised this calendar year. In a press statement, group chief executive James Riley noted strong interest from investors in the Washington DC property while also highlighting the US as a key market for the group. Shares of Mandarin Oriental ended Tuesday flat at US$1.86 on the Singapore Exchange.

Mainboard-listed Pavillon Holdings, previously known as Thai Village, could dish up a change of board control if its largest shareholder’s move to oust the executive chairman is successful. A meeting requisition from shareholder Zheng Fengwen, through Seven Star Capital on Jul 14, sought to boot the executive chairman John Chen Seow Phun and independent director Ko Chuan Aun from the board. Zheng, a former executive director of Pavillon, and major shareholder Teo Kiang Ang have nominated themselves for the positions of director and executive chairman, respectively, at the extraordinary general meeting that is being called for. Zheng holds 25.8 per cent of Pavillon; Teo, the founder of taxi operator Trans-Cab and bottled cooking gas supplier Union Gas, has recently been raising his stake and now holds nearly 20 per cent.

Netflix on Tuesday averted its own worst-case scenario of subscriber losses, posting a nearly 1 million drop from April through June, and predicted it would return to customer growth during the third quarter. Shares, which have fallen roughly 67 per cent this year on concerns about the company’s long-term prospects, were up 8 per cent at US$218.10 in after-hours trading following the results. Investors took the forecast as a comforting signal that Netflix could still find new subscribers despite a rocky global economy and signs of saturation in its biggest market, the United States and Canada. The world’s largest streaming service also said it plans to launch its ad-supported option next year, and it warned that the strong dollar was hitting revenue booked from subscribers abroad. Netflix lost 970,000 subscribers in the second quarter. The company had said in April it expected to lose 2 million customers in the current quarter, shocking Wall Street and raising concerns that the streaming TV boom had come to an abrupt end.

Google faces a London trial over an estimated £920 million (S$1.5 billion) damages claim after a court authorised a lawsuit that alleges the Alphabet-owned tech giant overcharged 19.5 million customers for app store purchases. The class action, which was certified by the Competition Appeal Tribunal on Monday (Jul 18), alleges Google abused its dominant position by charging up to 30 per cent commission on popular apps on its Play Store, including Roblox, Candy Crush Saga and Tinder since October 2015. A detailed judgment has yet to be published, a spokesperson for the claimant group said on Tuesday. Google did not immediately reply to requests for comment. Regulators, rivals and consumer champions are trying to curb Big Tech, filing lawsuits across the globe against the likes of Google and rival Apple over alleged anti-competitive behaviour. The European Union alone has fined Google more than 8 billion euros (US$8.2 billion) in recent years over anti-trust practices.

Toymaker Hasbro beat market estimates for quarterly profit on Tuesday (Jul 19), riding strong demand for its Magic: The Gathering trading-card game and an increase in prices. Despite a wider slowdown in the gaming market this year, sales at Hasbro have held up well due to a steady stream of new releases. The company unveiled an expansion set of Magic: The Gathering in the second quarter, which analysts said lifted orders for both tabletop and online versions of the game. The Wizard’s of the Coast business, home to the trading-card game and Dungeons & Dragons, posted a near 17 per cent increase in operating profit in the 3 months ended Jun 26. The low production costs of those games, as well as higher prices for Hasbro’s toys like Nerf blasters and My Little Pony figures, helped adjusted operating margins expand to 18 per cent from 16 per cent even as freight expenses surged. Adjusted net earnings rose 10 per cent to US$160.6 million. On a per share basis, the company earned US$1.15, beating analysts’ estimates of 94 cents per share, according to Refinitiv data.