Singapore stocks ended sharply lower on Thursday (Feb 24) as reports emerged that Russia’s invasion of Ukraine was underway, with explosions heard across the country. The benchmark Straits Times Index (STI) tumbled 3.5 per cent or 116.94 points to close at 3,276.06. Markets were down elsewhere in the region as well, with major indices in Hong Kong, Japan, South Korea and Australia closing between 1.8 per cent and 3.2 per cent lower. 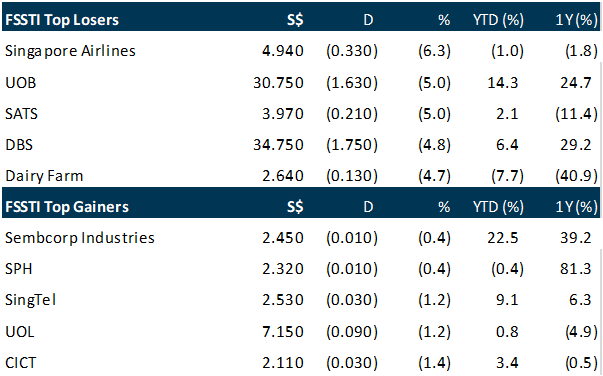 Sunseap Group will put on hold plans to be listed on the Singapore Exchange (SGX), its chief executive officer (CEO) said after concluding the sale of a 91 per cent stake to EDP Renewables (EDPR) for S$1.1 billion on Thursday (Feb 24). Frank Phuan, also co-founder of the Singapore renewable energy company, confirmed as well that EDPR’s acquisition meant that its early investors, including state investor Temasek, which owned 12 per cent of Sunseap, have relinquished their entire stake in the company. Phuan and his fellow co-founder Lawrence Wu now hold a 7 per cent stake – about half of what they owned before the acquisition – while its Japanese investors, including Sumitomo Corporation, retained 2 per cent holdings in the company. Phuan revealed these to The Business Times on the sidelines of a press conference at the Marina Bay Sands Convention Centre on Thursday, where EDPR and Sunseap held a deal-closing ceremony.

Flag carrier Singapore Airlines (SIA) posted a net profit of S$85 million for the third quarter to December 2021, registering its first quarterly profit since the onset of the pandemic thanks to increased air travel and strong yields in the cargo market during the year-end period. It also reported an operating cash surplus of S$322 million for the 9 months to December, reversing the operating cash burn that it had been experiencing since the start of the pandemic. SIA was able to tap pent-up travel demand during the year-end holiday season as Singapore launched and expanded vaccinated travel lanes (VTLs). Passenger load improved 18.9 percentage points quarter-on-quarter to 33.2 per cent for the 3 months ended December. Passenger load factor measures the percentage of available seating capacity filled by paying passengers. However, the group noted that passenger traffic is likely to moderate in the fourth quarter as travel demand from the year-end holiday season wanes.

Far East Orchard‘s net profit for the financial year ended Dec 31, 2021 rose to S$28.1 million, from S$1.5 million the previous year, primarily on the back of fair-value gains on investment properties. Excluding the S$44.8 million in fair value and other gains, the group would have been in a net-loss position for FY2021. Earnings per share worked out to 6.12 Singapore cents, higher than the 0.35 cent of the previous year. Revenue dipped 4.8 per cent to S$106.8 million for the full year from S$112.2 million the year before. The decline was mainly due to the impact of the pandemic on the group’s hospitality business, as well as the lockdowns and border closures which have impeded tourism. This was partially mitigated by the demand for accommodation facilities for isolation purposes, and from companies looking to house foreign workers in Singapore, said the group in a statement on Thursday (Nov 24). Contributions from its purpose-built student accommodation (PBSA) business also helped offset some of the losses from the hospitality segment.

Coinbase Global shares slumped about 3 per cent in post-market trading after the biggest US cryptocurrency exchange cautioned that trading volume will decline in the first quarter. The disappointment comes even after the company reported revenue jumped to US$2.5 billion in the fourth quarter, compared with a US$2 billion average estimate by analysts. The closely-watched metric of monthly transacting users was 11.4 million, beating the average analyst estimate of 9.8 million and up from 7.4 million in the third quarter. Coinbase’s shares have mirrored the moves of Bitcoin since the company went public last April. The stock has dropped about 30 per cent this year amid a retreat in cryptocurrency prices. Coinbase slumped to around US$172.02 in after-hours trading.

Payments platform Block beat profit estimates on Thursday (Feb 24), as busier trading in bitcoin softened the blow from declining growth in digital commerce. Block, which changed its name from Square in December, posted net revenue of US$4.1 billion in the fourth quarter, up from US$3.2 billion last year, as several of the firm’s business lines continued to grow. The company reported a profit of US$1.2 billion, up from the US$804 million a year earlier. Square, the company’s business for sellers, generated a profit of US$657 million, while Cash App reported a profit of US$518 million. Square’s profit from markets outside the United States grew 60 per cent year over year in the fourth quarter, faster than the business overall. Block reported earnings per share of US$0.27, beating analysts’ average estimates of US$0.22. Despite the report, shares of Block fell as much as 4.5 per cent in after-hours trade to US$91.44 following results. Block’s Cash App generated US$2 billion of bitcoin revenue during the fourth quarter, up 12 per cent year over year despite the cryptocurrency’s sharp swings in value through the end of the year.

Oil prices jumped on Thursday (Feb 24), with Brent rising above US$105 a barrel for the first time since 2014 before easing, after Russia’s attack on Ukraine exacerbated concerns about disruptions to global energy supply. Russia launched an all-out invasion of Ukraine by land, air and sea in the biggest attack by one state against another in Europe since World War Two. US President Joe Biden unveiled harsh new sanctions against Russia, imposing measures to impede its ability to do business in the world’s major currencies along with sanctions against banks and state-owned enterprises. Global benchmark Brent crude rose US$2.24 or 2.3 per cent to settle at US$99.08 a barrel, after touching a high of US$105.79. US West Texas Intermediate (WTI) crude rose 71 US cents or 0.8 per cent to settle at US$92.81 a barrel, after earlier rising to US$100.54.

– 2H21 profit of $61.8mn was above our estimates, at 53.6%. The beat came from property development (PD) and property financing (PF).
– Revenue from hotel operations showed nascent recovery as improvements in its European hotel operations lifted earnings pared back by weakness from its China operations due to the resurgence of COVID-19 in China.
– China outlook turns cloudy as PF and PD business impacted by the slowing property market and recent loosening of monetary policy. Dongguan inventory turnover rose to 12.5 months from 3.2 months previously.
– Downgrade to NEUTRAL due to slower economic growth in China with reduced SOTP target price of S$1.39. Catalysts for upgrade are a recovery in the Chinese property market and its China hotel portfolio.