Stocks in Asia look set to climb after a US surge on the prospect of an eventual slowing in the pace of Federal Reserve monetary tightening, an outlook that weighed on bond yields and the dollar.

Futures signal gains for Japan, Australia and Hong Kong when they open Thursday. The S&P 500 jumped 2.6% and the technology-heavy Nasdaq 100 delivered its best day since November 2020 as investors embraced risk. US contracts dipped in early Asian trading.

The Fed raised rates by 75 basis points for a second month, said such a move is possible again and reiterated its commitment to fighting inflation. But Chair Jerome Powell added the pace of hikes will slow at some point and the Fed will set policy meeting-by-meeting, avoiding explicit guidance on hike increments.

The dollar dived, while most Treasury maturities advanced. Swaps tied to the date of Fed policy meetings imply a 3.3% peak for the fed funds rate around year-end — not much higher than the current range of 2.25% to 2.5%. Oil, gold and Bitcoin are also up in the wake of the Fed meeting. 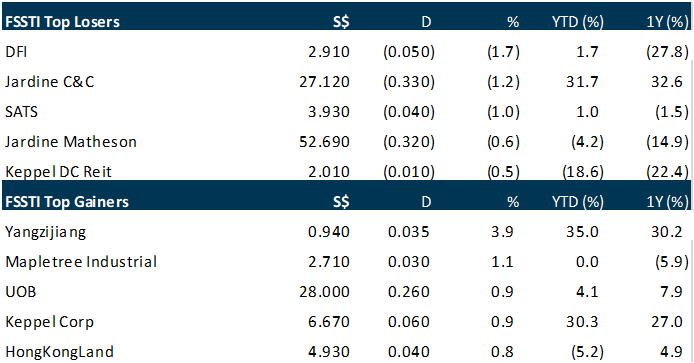 The trustee-manager of Keppel Infrastructure Trust (KIT) on Wednesday (Jul 27) reported a 2.7 per cent year-on-year increase in its distribution per unit (DPU) for the half year ended June 30, despite a lower distributable income for the same period. DPU in H1 was 1.91 cents, up from 1.86 cents in the year-ago period, KIT’s unaudited results indicated. However, H1 distributable income was 13 per cent lower at S$87.6 million, compared with that in the first six months of 2021. KIT’s trustee-manager said this was due mainly to “higher trust expenses, as well as the under-recovery of fuel costs at City Energy as a result of timing differences, which will be recovered through higher tariffs in future”.

Construction firm Lian Beng Group on Wednesday (Jul 27) reported a 66.7 per cent year-on-year surge in net profit for the financial year ended May 31, with activity across all business segments recording an improvement following the easing of Covid-19 restrictions. Net profit for FY2022 came in at S$43.5 million, compared with S$26.1 million in the previous financial year, according to the mainboard-listed company’s condensed interim consolidated financial statements. Earnings per share rose to 8.70 Singapore cents, from 5.22 cents in the previous year. Likewise, overall revenue jumped 53.2 per cent year on year to S$788.3 million.

United Overseas Insurance (UOI), the general insurance arm of UOB, reported a loss of S$18.7 million for H1 2022 from its profit of S$27.2 million in H1 2021. An interim dividend of S$0.085 per share has been declared. Underwriting profit for the period rose 8.5 per cent to S$8.8 million from S$8.1 million a year prior. This was driven by an increase in premiums for the property and reinsurance classes of insurance. However, this was dragged by H1 2022 non-underwriting income recording a loss of S$3.3 million, from a gain of S$5.6 million due to realised and unrealised losses from investments. Other comprehensive income for H1 2022 also weighed down UOI, recording an unrealised loss of S$23.4 million, compared to an unrealised profit of S$15.6 million a year ago. This was driven by a weakening of the global equities and fixed-income markets from negative sentiments, rising inflation and geo-political tensions.

ESR Group has acquired 654,546 shares in ESR-LOGOS Funds Management, the manager of ESR-LOGOS (E-LOG) REIT from Tong Jinquan, bringing its stake in the manager to over 90 per cent. The company is also in the process of acquiring an addition 189.9 million ESR-LOGOS units from Tong, and will be the largest unitholder of E-LOG REIT at 14.4 per cent. Before ESR’s acquisition, Tong was the largest unitholder of E-LOG; he has been a shareholder of E-LOG’s manager since October 2018. “With this acquisition, we will continue to work to propel E-LOG towards an enhanced growth trajectory by accelerating its exposure to in-demand quality logistics and industrial properties, while repositioning the portfolio quality by divesting non-core assets to continue to deliver long-term sustainable value to its unitholders.” said Jeffery Perlman, chairman, ESR.

The Federal Reserve said on Wednesday it would not flinch in its battle against the most intense breakout of inflation in the United States since the 1980s even if that means a “sustained period” of economic weakness and a slowing jobs market. As he explained the logic behind the stiffest interest rate increases in roughly four decades, Fed Chair Jerome Powell was peppered with questions about whether the US economy was in or on the cusp of a recession – a notion he rejected because US firms continue to hire in excess of 350,000 additional workers each month. “I do not think the US is currently in a recession,” he told reporters after the end of the US central bank’s latest policy meeting, citing an unemployment rate that is still near a half-century low and solid wage growth and job gains.

Orders placed with US factories for durable goods rose unexpectedly in June, fuelled by a surge in defence aircraft and pointing to sustained demand for equipment despite rising interest rates. Bookings for durable goods – items meant to last at least three years – increased 1.9 per cent in June after a 0.8 per cent advance a month earlier, Commerce Department figures showed on Wednesday(Jul 27). The figures aren’t adjusted for inflation. The value of core capital goods orders, a proxy for investment in equipment that excludes aircraft and military hardware, rose 0.5 per cent for a second month. The median estimates in a Bloomberg survey called for a 0.4 per cent decrease in overall orders. Core equipment bookings were projected to rise 0.2 per cent.

Canada’s Shopify on Wednesday (Jul 27) warned of an adjusted operating loss for the second half of the year, blaming higher costs and expenses related to the integration of ecommerce fulfilment company Deliverr. The company, which provides tools and services to help businesses build their online store, also reported a surprise loss for the second quarter, sending its US-listed shares down about 8 per cent at US$29.12 in premarket trading. Shopify was among the big winners during the pandemic when many brick-and-mortar retailers shackled by pandemic-related lockdowns flocked to its infrastructure to set up stores online to sell their products.