The Singapore bourse, which for a while had a shot at being an outlier in a sea of red that swept across regional bourses, buckled under selling pressure near the close and snapped 3 straight days of gains. The key Straits Times Index closed 5.34 points or 0.17 per cent lower at 3,134.87 on Wednesday (Jun 29), after holding above water for much of the trading day, underscoring the fragile trading sentiments in a climate gripped with inflation and recession woes. Losers outpaced gainers, with 285 counters down and 197 up. DBS, Venture Corp, Singapore Exchange and Wilmar International led the day’s losses.

Wall Street stocks were near flat at the end of a choppy session on Wednesday as the market struggled to recover from the prior session’s rout. Worries about inflation, weakening consumer sentiment and tightening monetary policy have weighed on stocks throughout 2022, including Tuesday, when the S&P 500 tumbled two percent. The Dow Jones Industrial Average finished up 0.3 per cent at 31,029.31. The broad-based S&P 500 slipped 0.1 per cent to 3,818.83, while the tech-rich Nasdaq Composite Index edged down by less than 0.1 per cent to 11,177.89. 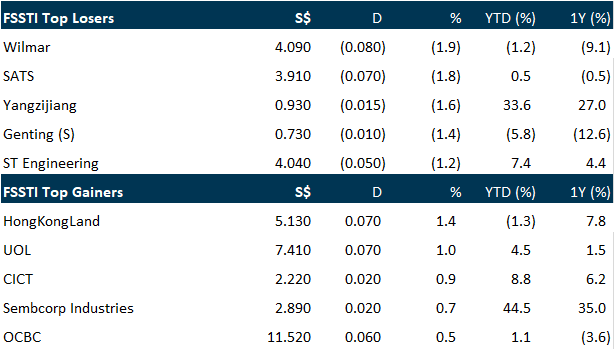 Tracetogether token maker iWOW Technology saw its net profit inch up 4 per cent to S$3.9 million for FY2022 ended March, on the back of growth across all its business segments. iWOW declared a final dividend of 0.36 Singapore cent a share. Excluding one-off expenses from its initial public offering in April, its net profit grew 36 per cent to S$5 million for the year. Revenue for the year rose 31 per cent to S$34.5 million, with iWOW’s IoT-as-a-Service segment revenue growing 44 per cent to S$4.1 million. This was on the back of sales growth for its electronic monitoring solutions, alert alarm system for the elderly and smart metering services. The company’s smart city solutions segment likewise saw revenue rise 20 per cent to S$28.1 million, mainly on higher sales for tracing tokens. Revenue from trading and other areas stood at S$2.4 million, driven by sales of non-core products to customers in Singapore and Hong Kong. iWOW said it is optimistic about its long-term growth with its Singapore presence, and is gearing up for geographical expansion and the growth of its product portfolio. “In addition, the group has been working to shift its revenue mix towards the higher-margin subscription model. iWOW believes the change will enhance its ability to deliver sustainable growth to all stakeholders,” it said. iWOW has S$4.8 million in cash and S$900,000 in borrowings as of end-March. Its shares closed at S$0.245 on Wednesday (Jun 29), up S$0.005 or 2.1 per cent.

Straits Real Estate, a unit of mainboard-listed Straits Trading, is acquiring a portfolio of office and industrial buildings and several plots of development land in Gloucester Business Park for £130 million (S$219.5 million). Spanning over 276 acres, the business park (roughly 180 km west of London) has a mix of office, industrial and logistics properties supported by retail and commercial offerings. The portfolio that Straits Real Estate is acquiring comprises 522,000 square feet of net lettable area across 9 properties – 7 are offices and 2 are industrial assets – as well as 6 plots of development land with 830,000 square feet in all. The existing properties in the portfolio are fully occupied, with the majority of occupiers from the energy, cybertechnology, financial services and healthcare sectors. Tenants include GE Aviation and Lockheed Martin. The plots of development land includes 5 plots consented for industrial and logistics development, and 1 small plot targeted for retail use. The company aims for the plots to support up to 310,000 square feet of environmental-friendly industrial buildings once fully developed.

THC Venture, which has made a bid to privatise structural steel specialist TTJ Holdings, does not intend to raise its offer price of S$0.23 per share, it said in a Wednesday (Jun 29) bourse filing. The offeror is solely owned by TTJ’s executive chairman Teo Hock Chwee. Its update comes after 4 directors of TTJ recommended that shareholders reject the offer – namely, executive director and chief financial officer Chiong Su Been, lead independent director Lim Yian Poh, and independent directors Ling Chien Yien and Leong Yee Yew, according to TTJ’s website. The directors said that they concur with the independent financial adviser Zico Capital, which advised shareholders to reject the offer for being “not fair and not reasonable”. The offer price is lower than Zico’s estimated value range of between S$0.37 and S$0.46 per share. Zico Capital also noted that Teo has been holding about 84.4 per cent of the company’s total share capital since September 2015 – just 6 percentage points away from the 10 per cent free float threshold required by the listing manual. The offer will close at 5.30 pm on Jul 8. Shares of TTJ closed flat at S$0.245 on Wednesday.

Federal Reserve (fed) chair Jerome Powell said the US economy is in “strong shape” and the central bank can reduce inflation to 2 per cent while maintaining a solid labour market, even though that task has become more challenging in recent months. He also vowed to ensure rapid price increases don’t become entrenched, saying that “we will not allow a transition from a low inflation environment to a high inflation environment.” “We hope that growth will remain positive,” Powell said during a panel discussion on Wednesday (Jun 29) during the European Central Bank’s (ECB) annual policy forum in Sintra, Portugal. Household and business finances are also in solid shape, and “overall the US economy is well positioned to withstand tighter monetary policy.” Raising interest rates without sparking a recession “is our aim and we believe there are pathways to achieve that,” Powell said, reiterating comments he’s made this month after the Fed on Jun 15 raised interest rates by 75 basis points, the biggest increase in 3 decades. Powell has signalled that another move of that size – or a 50 basis-point increase – will be on the table when they meet again in late July. He reiterated on Wednesday that the Fed is raising rates “expeditiously” and aims to move “into restrictive territory fairly quickly,” referring to having borrowing costs at levels that would restrain rather than spur economic growth. Powell and his colleagues have pivoted aggressively to fight the hottest inflation in 40 years amid criticism that they left monetary policy too easy for too long as the economy recovered from Covid-19. They’ve raised rates by 1.5 percentage points this year and officials forecast about 1.75 points of further cumulative tightening in 2022.

US personal spending expanded in the first quarter at the weakest pace of the pandemic recovery, marking a surprise sharp downward revision that suggests an economy on weaker footing than previously thought. Outlays on goods and services rose an annualised 1.8 per cent, compared with a 3.1 per cent pace in the previous estimate, according to Commerce Department data out on Wednesday (June 29). Overall gross domestic product was revised down slightly to a 1.6 per cent annualised decline in the first quarter. Spending on both services and merchandise was revised lower. Within services, outlays for financial services, insurance and health care were marked down. Spending on goods was revised to an annualised 0.3 per cent decline from little changed, reflecting less robust spending on durables.

The global oil and gas (O&G) market is going through a “turbulent period” and the industry’s spare capacity is currently at a low level, but Shell’s chief executive Ben van Beurden stressed that the energy giant will keep its focus on the cleaner “future of energy”. Speaking to reporters on Wednesday (Jun 29), he said that spare capacity is low now due in part to the fact that companies like Shell, and national oil companies around the world, had “scaled back investment levels quite a bit” even before the Covid-19 pandemic. The ultimate goal for companies and governments around the world was to scale back O&G investments and step up investments in renewables. But while the tapering of O&G investments is “exactly on track”, van Beurden said investments in renewables have yet to pick up pace enough to level things out. “There’s about a trillion dollars of (O&G) investments that didn’t happen that would have happened under normal circumstances over the last 3 years or so,” he said. Demand for O&G, on the other hand, has grown. “We see demand growing to levels before the pandemic, and we will probably see it grow for quite a few years to come.”